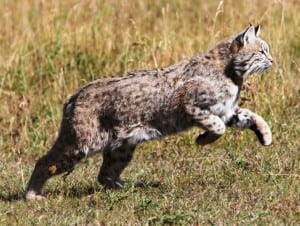 A bald eagle. A moose. A wolf. An alligator. Even a rattlesnake. There are certain sightings in nature that without exception cause the surprised viewer to pause and say, “Wow, that was cool!” The more uncommon the sighting, the louder the “wow.” One such highly desirable sighting in Philipstown is the bobcat. And yes, they are definitely here. “I see a bobcat, on average, a couple times a year,” says Neal Tomann of Garrison. When Tom Corless and his son saw one in the Garrison School Forest last year, they simply stood and watched it, transfixed. When I saw a bobcat dart across Route 9D several years ago between Garrison and Bear Mt. Bridge – I indeed exclaimed “Wow!” – even though I was alone in my car.

What to look for

The bobcat, or Lynx Rufus, as it is known to all you Latin scholars, is the most common wildcat in North America and, at about twice the size of a large house cat, it is also the smallest. It has thick, dense fur that is often spotted, with a reddish-brown coat in summer that is more grey in winter. A bobcat’s face has distinctive, long cheek whiskers and it has black tufts near the top of each ear. It gets its name from its short tail, which has been described as “bobbed.” Females usually weigh in around 14 pounds, with the heftier males averaging 21 pounds. Both genders can, on occasion, tip the scales at as much as 30 pounds. They are up to two feet in height and can reach three and a half feet in length.

The bobcat has three cousins in the Lynx family. It is sometimes mistaken for the Canada Lynx, which is somewhat larger. While I’ve never heard a bobcat roar, its cry is apparently so deep and rough that it has also been mistaken for a mountain lion. We’ll get to the “laughable” claims of local mountain lion sightings a bit further down the page. The Iberian Lynx and Eurasian Lynx are the bobcat’s non-North American cousins.

A bobcat doesn’t even glance at the vegetarian menu as it roams in the wild. In New York State its diet consists mainly of rabbit, hare and deer. It also won’t turn up its nose at birds, squirrels, voles, and even road kill. Lambs, poultry and young pigs have also fallen prey to bobcats in more agricultural areas. While a deer, which is almost ten times the weight of a bobcat, not to mention much taller, may seem like a very ambitious target for a bobcat, the diminutive cat is known as a ferocious and skilled hunter. It stalks its prey and, when it goes for the kill, can leap up to 10 feet.

Undoubtedly due to its own ability as a hunter, its quickness and formidable physical skills, adult bobcats have, few if any, predators – other than man. Kittens are killed by foxes, owls, and even adult male bobcats. One of the most common causes of death to kittens, juveniles and adult bobcats alike is starvation – especially during severe winters. 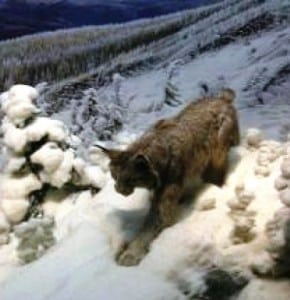 Hunting and Trapping: Should it be expanded?

Many U.S. states paid a bounty on bobcats until 1971 when New York and others put an end to that practice. In 1973, a large group of countries, including the U.S., made it illegal to export pelts of endangered spotted cats such as the cheetah. The treaty also listed cats that might be adversely affected by the export ban. Bobcats were included because, as a spotted cat, it could be seen as an alternative to the banned pelts. A single bobcat pelt can fetch as much as $200.

States control the management of bobcats in the U.S. While their pelts cannot be exported, they are hunted and trapped in New York. The New York State Department of Environmental Conservation (DEC) recently closed public comment on a proposed new management plan for bobcats, which, if adopted, will expand hunting and trapping in much of the state. Bobcat populations have reportedly increased across the state and much of the country in recent years. On its website, the DEC announced that comments on the proposed plan were received from more than1,500 organizations and individuals.

Predictably, some are happy with the proposed expansion of hunting and trapping while others are strongly opposed. Just prior to the deadline for public comment, New York State Trappers Association (NYTA) President John Rockwood posted this message on the organization’s website: “It is extremely critical that all trappers forward positive comments to the NYSDEC … I have heard that … the anti-comments outweigh the positive comments by as much as 30 to 1! A lot of hard work has gone into this new plan that will greatly expand bobcat harvest opportunities across much of N.Y. State where no open season presently exists.”

The Adirondack Council is one group that opposes the new plan. In a Feb. 17 article published in the Adirondack Daily Enterprise, executive director Brian Houseal was quoted as saying, “A cat in the wild is worth a lot more than a pelt on the wall…Bobcats play an important role in controlling populations of deer, squirrels, chipmunks, rabbits, rats, voles and other species that can cause widespread damage if their numbers grow unchecked. Predators, even small ones like the bobcat, are vital to the health of the forest.”

Attempts to reach the Putnam County Federation of Sportsmen’s Club (PCFS) and the Garrison Fish and Game Club (GFGC) for comment were not successful. The DEC is now reviewing all public input and will likely make an announcement about the new management plan this spring.

While bobcats are elusive and seldom seen, their numbers locally seem to be at least stable if not increasing. The Taconic Region, which includes Philipstown and Fahnestock State Park, is one of three bobcat population centers identified by DEC along with the Catskill and Adirondack regions. Paul Kuznia, director of the Taconic Outdoor Education Center (TOEC) said, “They’re common throughout the park. And probably more than you would think in Putnam County.” He also said that a bobcat has been seen repeatedly last fall and this winter near the Center. “They play an important role in the natural predator-prey balancing act,” he added.

Over at Constitution Marsh Audubon Center & Sanctuary, intern Jacquelyn Hokamp wishes she could see a bobcat. “It would be quite an exciting surprise to witness the elusive cat. Last week, I heard an interesting animal cry outside around 9 p.m. It sounded like a strange mixture between bird, cat, [or] even a screaming human. We wanted to think it was a bobcat … but Eric is pretty sure it was a fox,” she said.

Eric, is Eric Lind, director of the Center and he has experienced the sighting that Jacquelyn hopes to, although even for him, encounters with bobcats have been very infrequent. “My own sightings could be counted on one hand and I’d still have plenty of fingers free to hail a cab,” he said. ” A few years ago, on an early morning walk on the marsh trail, I felt a close stare, and as I looked around, the shape of an animal came into focus. A bobcat glared from behind a blueberry bush. We stared at each other for a few seconds before she just evaporated, back into the woods. Like a fool in love, I went to the same spot at the same time the following morning, but she stood me up.” 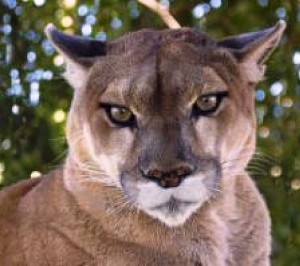 Mountain Lions? Yeah right….
And what about that other, bigger cat – the one that bobcats are sometimes mistaken for – the mountain lion. Claims of local mountain lion sightings have been known to evoke bewildered head shaking and fits of laughter in local pubs. But it seems this is one claim that is not alcohol induced. A New York Times article on June 12, 2011,  complete with a photograph as evidence, describes how, after a number of reports that were initially considered dubious, a mountain lion was killed when hit by a SUV near Milford, Connecticut.  As the crow flies, Milford is 48 short miles south and east of Cold Spring. Are you willing to bet they never visit Philipstown?

Feedback
Have you seen a bobcat in Philipstown? Do you support or oppose increased hunting and trapping of bobcats? Please submit your comments below.

9 thoughts on “Philipstown’s Wild Side: The Bobcat”