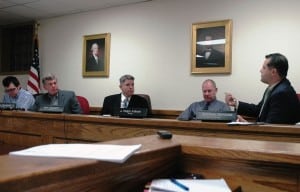 CS Village Board also approves RFP for The Grove

Relief from problems with Cold Spring’s aged water system drew nearer Tuesday (March 6) when the Village Board approved a $965,800 bid to clean and re-line the major water pipe from Fishkill Road in Nelsonville to the railroad tracks. The vote cleared the way for work to start in early April. Trustees Bruce Campbell and J. Ralph Falloon joined Mayor Seth Gallagher in approving the bid, from Mainlining Services Inc., of Elma, N.Y.; Trustees Charles Hustis and Airinhos Serradas abstained. “I didn’t have enough time to read the proposals and scope of the work,” Hustis said, in declining to vote. Serradas did not give a reason for abstaining. Sounding somewhat taken aback by their reaction, Gallagher said that the contract details “were put out to bid months ago” and that the board had reviewed all the materials. “Nothing has changed” on the project, which “we’ve been working on for probably about two years now,” he said.

Water Department Superintendent Greg Phillips told the board the department will conduct the spring hydrant flush the week of March 25, to perform flow tests “and clean the system up as much as possible before the project begins.” The cleaning and re-lining, a large undertaking, “will cause inconvenience at times,” with traffic disruptions and, probably, water discoloration. He asked for residents’ patience while the work continues. “In the end, it should be well worth it,” he said. Of the four bids received, Mainlining Services, located near Buffalo, submitted the lowest and won the endorsement of Phillips and R.J. Gainer, the village’s water engineering consultant. The other bids, from companies in New Jersey, Massachusetts, and Connecticut, exceeded $1 million each, with the highest topping off at $1,608,450.

In other water-related business, Phillips reported that the night of Feb. 29, the water plant began experiencing difficulties with two of three raw-water pumps, “with significant drops in the amount of water coming into the building.” The volume went from 300 gallons a minute per pump to barely 200 gallons, he said. One by one, he and his colleagues eliminated likely reasons for the decrease, including possible obstructions in the line bringing water into the plant, and efforts to solve the mystery would continue, he said. Phillips mentioned that he had spent one 19-hour day and gone to bed at 3 or 4 a.m. a couple of recent nights while dealing with the situation. The mayor expressed appreciation to Phillips “for doing that and taking care of the village.”

The board voted 4 to 1 to issue an RFP – request for proposal – for The Grove, the 1853 once stately but now derelict house acquired by the village in 2003. It stands adjacent to the Butterfield tract above Chestnut Street. All board members but Hustis favored issuance of the RFP; he did not give a reason for voting “no.”

The RFP says the village wants to sell the property and seeks “potential purchasers who will restore The Grove’s building in a way sensitive to and in keeping with it historic significance and listing on the [New York] State … and the National Register[s] of Historic Places.” The RFP also stipulates  that  “the proposed use of The Grove should offer some benefit to the village, whether by filling a recognized need – whether residential or commercial – or by offering the public use and enjoyment of the property in some other respect.” RFPs are due by 3 p.m., on April 24.

In his written monthly update to the board, Cold Spring Police Department Commanding Officer George Kane cited recent, invigorated enforcement of traffic laws involving school zones and pedestrian safety. During February, “notably, 48 tickets were issued for speeding alone” and of those 14 were issued along Main Street and Morris Avenue “to motorists speeding in the school zone,” wrote Kane, who did not attend the meeting. Likewise, the police are watching crosswalks and “the safety of pedestrians within the village will not be jeopardized,” he said. He reported that in one afternoon, March 2, three motorists received tickets for not yielding to pedestrians at the crosswalk on Chestnut Street-Route 9D and Benedict Avenue, in front of the Foodtown shopping plaza.

“I think three tickets in one afternoon shows the problems,” Gallagher said. Drivers “are not slowing down for people in the crosswalk. I think it would be worth it” to install a traffic light there, he said, proposing that the village consider the option. Campbell said New York State Department of Transportation experts mention various devices that the village could utilize to enhance safety, but that the action requires a written Village Board resolution. He promised to explore options.

As on four occasions since early December, the board devoted considerable time – about 40 minutes – to the ongoing push by Serradas for an RFP for outsourcing garbage and recycling pick-up. At present, the village highway department handles the collections, making stops at about 815 locations – approximately 775 households, with the rest being apartments and a lesser number of businesses. (Businesses often arrange their own trash service.) Serradas again sought full board assistance to force the mayor, or, highway superintendent, to promptly prepare a list detailing all collection locations, stating when collections occur, and differentiating between commercial and residential stops, ostensibly to assist with an RFP. Due to “the mayor’s bias or whatever reasons he doesn’t want this thing done,” Serradas asserted.

Gallagher replied that after the last garbage go-round, he spoke with Highway Foreman Ed Trimble and learned “it would be quite involved” to get a listing as specific as Serradas wants. Gallagher also contends that outsourcing the collection service would eliminate village income from sale of recycled materials; cost the village about $100,000 more than the current system, and force homeowners to pay about $200 annually in fees.

“I think we should not charge the residents,” Serradas emphasized. “It’s asinine to even think I would want to do that.” His draft RFP, circulated in January, proposed a household charge for garbage collection.

According to Gallagher, although the village knows where it collects garbage, it does not know which specific units in an apartment complex, or a building with both commercial space and apartments, put out trash or recycling for any given pick-up.  Likewise, he said, homeowners may put out trash or recycling one week and not the next, complicating the pin-pointing and frequency of pick-ups from a specific address. Gallagher and Campbell both described the detailed list as unnecessary for an RFP and referred to Serradas’ draft RFP as flawed and in need of substantive revisions.

Serradas termed the location data crucial. “We have no idea where our garbage is being picked up; we have no idea who is picking up,” he said. “It’s disturbing to me we don’t know. The fact that I have to go to this length to get that [compilation] done is ridiculous.” Campbell recommended that Serradas undertake the data-gathering himself. “You can probably get some of that information and bring it to us,” he said. “You provide it.”

Instead, Serradas proposed a motion that someone be assigned to prepare the list in two weeks, leaving a blank for the name of the designated list-compiler. The measure passed, 4 to 1, with Gallagher the sole “nay.”

“This is another situation where Airinhos has not been willing to put the time into it. But he’s pushing other people to do the work,” Gallagher said. Falloon offered to “help you, Airinhos,” draw up the list.

“I don’t have the time to do it,” Serradas said. Then he addressed the mayor: “I task [assign] you to do it. How’s that?” As a follow-up to his first motion, Serradas proposed that the mayor compile the list. That motion failed, with Hustis and Serradas backing it and Gallagher and Campbell opposed. “I would never do it,” the mayor said. “What purpose does it serve?” Falloon did not vote but ended the debate – for the evening, anyway – by promising to talk to Trimble about obtaining the detailed data Serradas wants.

At Serradas’ suggestion, the board voted 3 to 2 to video-record joint meetings of the Village Board and Planning Board on the Butterfield redevelopment project. Gallagher and Campbell cast the “nay” votes. The mayor expressed reservations “just on a cost basis.” The village pays $225 for each two hours of video-recording and has each formal monthly Village Board meeting recorded. Campbell said he backed extension of the video coverage to the joint sessions with Planning Board members “but I’d like to get some comments from them” first.

Videography matters resurfaced later, when the board unanimously agreed to allow Citizens of Philipstown, a civic involvement group, to post copies of village board meetings on the COP website. The mayor observed that a few weeks earlier, a video of the board’s formal February meeting had been posted on COP’s website “without permission from the village. It was kind of a surprise,” he said. He speculated that Serradas gave the recording to COP.

Gallagher said that to obtain his copy Serradas bypassed normal channels and went directly to the videographer hired to record the session for the village government. “You’re not able to do that,” he said.

“The CD’s my property if I pay for it,” Serradas countered. “I paid for it, I buy the DVD.”

A couple of years ago, another resident had asked about posting such recordings on his public affairs website and the village government drew up a contract on costs and usage. The board then voted 5 to 0 to grant COP the same courtesy and terms.

Executive session legitimacy
Nearly 2 ½ hours into the meeting, the board adjourned the public portion to go into executive or closed session to confer with Gaba and the building inspector over possible litigation. That maneuver, too, drew objections from the floor. Michael Bowman, president of the Cold Spring Fire Company, which has clashed with the mayor over issues of fire company autonomy, argued that discussions with Gaba should occur “in open session. I’m still of the opinion you abuse” recourse to executive sessions, he told Gallagher. He also criticized the mayor for “just your abuse of the laws on meetings … the way you ran the meeting and your having an amendment to an active motion and trying to defend that. And seeing you sit between the two people on the wall behind you, it’s just, in my opinion, ridiculous.” Paintings of Presidents George Washington and Abraham Lincoln hang on the wall.
Photo by L.S.Armstrong