Incumbent Trustee Charles Hustis proved the highest vote-getter in the Tuesday (March 20) Cold Spring village elections that also gave a trustee seat on the Village Board to political newcomer Matt Francisco but dashed electoral hopes for Tom Rolston, a local restaurateur. Hustis garnered 410 votes to Francisco’s 401 and Rolston’s 184, in returns that included both machine and absentee ballots. The newly elected and re-elected trustees take office on April 2, according to Mayor Seth Gallagher, who watched the vote-counting and subsequently congratulated both winners.

“I’m happy I’m back on the board for another two years and happy to work with the mayor and rest of the Village Board,” said Hustis, a village native, a few minutes after the returns were announced at the polling place, the Cold Spring firehouse. “And now the election is over we can concentrate on the important issues at hand.” He said his priorities for his second term are improving Cold Spring’s aging infrastructure and ensuring a relatively conservative village budget, which he described as the two “hot ticket items.” 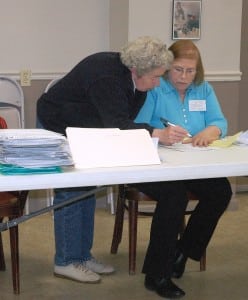 Francisco, a nine-year resident who works as a professional project manager in New York City, said “I appreciate the support from the village and am looking forward to digging right into the work at hand.” Asked what might top his agenda, he replied, “I’m certainly very interested in working for community involvement and the alignment of the boards for the Butterfield development.” A major and controversial project proposed for the old Butterfield Hospital property, it involves oversight by the Village Board, Planning Board, and other village committees.  Among other considerations, he said, “I think it’s a great opportunity to see how the other boards are functioning and to make sure we’re operating as efficiently as possible and are all pulling in the same direction.”

Rolston, reportedly ill with a throat malady, did not come to the polls for ballot counting and was not available for comment.

Along with the votes for the three contenders,  Village Clerk Mary Saari said that 23 voters cast write-in ballots, many of them for retiring, one-term Trustee Airinhos Serradas. The mayor, who clashed frequently with Serradas, said late Tuesday that he anticipated less friction on the board than in the last two years. “I think it’s going to function a lot smoother than it has and I think it’s good for the village,” he said. “I thank Tom for running. He ran a good campaign. And I congratulate Matt and Chuck. I think people had good choices and it was a good election. There wasn’t any negativity and I think people appreciated that and turned out.”

Indeed, along with providing a steady flow throughout the day, the electorate continued to arrive at the firehouse in the final minutes before the polls shut at 9 p.m.: The last two voters arrived at about 8:58.
Photos by L.S.Armstrong