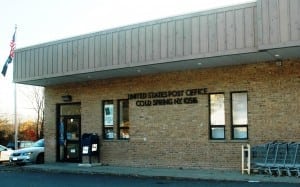 As the proposed redevelopment of the Butterfield property continues to unfold, the idea of putting the post office there moved from possibility to probability – at least as things stood by late Monday night (April 2). During a long special meeting, the Cold Spring Village Board considered a new twist in the answer to the old question of where to put the post office, scheduled to lose its lease Aug. 31 in an expansion of the adjacent Foodtown grocery. Under the scenario outlined Monday, the post office would go to the old Butterfield Hospital property but be housed initially in temporary trailers and then in a permanent home, through an anticipated agreement between the U.S. Postal Service (USPS) and Butterfield Realty LLC, the property owner. And to facilitate  the move, the Village Board would revise the tract’s existing B-4 zoning to allow not only a village government presence, which the zoning code currently permits, but a facility for any level of government –-  town, county, state or federal, including the USPS.

All along, plans by Butterfield Realty’s Paul Guillaro have involved a zoning change for the hospital parcel, but previously attention focused on a more sweeping code revision to permit a “Planned Unit Development” (PUD) that would contain not only housing for modest-income senior citizens but more upscale condos for wealthier retirement-aged buyers, plus an inter-governmental “municipal” building and retail space. The less comprehensive code change immediately envisioned would permit the post office and inter-governmental components of the plan to get underway even if details of the rest of the complex remain unsettled. Guillaro has drawn questions about the size, design, and need for the housing elements he intended to construct. B-4 zoning allows establishment of senior-citizen housing, if the developer obtains a special permit.

In section 134-18, the village’s zoning code ensures that “all municipal and governmental uses by the Village of Cold Spring of land and/or buildings are hereby permitted in each and every district,” including B-4. The language “is pretty specific” in stipulating that a government facility must be solely a village government entity, Mayor Seth Gallagher told his board colleagues. Revising the code to permit the presence of other, non-village governments means that the post office, a quasi-federal entity, could have quarters in the B-4 Butterfield district, the mayor explained.

Before the meeting, Gallagher met with Guillaro, and Joseph Barbaro, chairman of the village Planning Board, to discuss the project. USPS “is ready to sign a contract for a temporary location of the post office on the Butterfield site,” the mayor informed the trustees. Expanding the permitted uses “would allow them to sign. And it would allow the municipal building to happen.” Moreover, putting the post office at Butterfield “should be non-controversial,” he added, compared to the another, hotly debated idea: placing the post office on a sliver of the Foodtown Plaza, near its current space, or using the residentially zoned Lot B, at the at the corner of Marion Avenue and Benedict Road, for post office purposes.

Because the village code now permits village-government buildings in any zoning district, the board first talked of changing that wording to accommodate town-through- federal levels of government as well, subject to village government approval. Then Trustee J. Ralph Falloon realized that allowing any government entity in any zoning district could permit the post office to use Lot B. “It’d be giving a loophole that says it can go there. This could look like bad timing” and give the appearance the board wants to quietly provide for the USPS on Lot B, he said. His colleagues agreed. A few minutes later, they voted 4-0 to ask the village attorney to draft a zoning change to allow non-village, government entities only in the B-4 zoning district. Trustees Matt Francisco and Chuck Hustis joined Gallagher and Falloon in the approval; Trustee Bruce Campbell was absent.
Photo by M.Mell