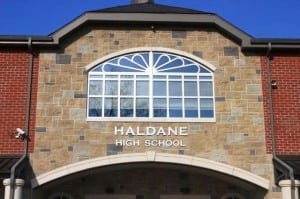 Haldane Board of Education trustees approved a proposed 2012-13 budget at their Tuesday, April 10 meeting that will raise property taxes 2.44 percent if voters approve it on May 15. According to a “Property Tax Report Card,” presented at the meeting, the trustees approved an increase in spending of 1.38 percent – for a total of $21,927,476 in 2012-13. That in turn would result in the 2.44 percent increase in the local tax levy – the amount of money raised through property taxes – a total of $17,462, 504.

New York State has imposed a so-called 2 percent cap on the tax levy but in reality the actual amount varies among school districts according to several factors. Haldane’s cap for this coming budget year is is a 3.16 percent increase; the proposed increase is  .72 percent less than that allowable limit. “We are not even getting [state] aid consistent with the cost of living,” said Superintendent Mark Villanti referencing a 3.2 percent rise in the Consumer Price Index.

State aid to Haldane has been reduced by about $500,000 in each of the past two years and officials expect more reductions next year.  For the budget being proposed for 2012-13, reserves and an unspent fund balance deferred decisions on cuts. Both administrators and trustees have warned that continued reductions in state aid in 2013-14 could have a severe impact on education and/or athletic programs since federal funds provided through the stimulus package and Jobs Bill are no longer available.

Board president Joe Curto praised administration for their work on the proposed budget. “You guys did a good job, keeping it [cuts] out of the classroom,” he said. “The Gap Aid [reductions in state aid] is the gorilla in the room and I still don’t know why the governor just doesn’t admit it.” The proposed 2012-13 budget is available on the Haldane website.

3 thoughts on “Haldane Board Approves Budget”