The proposed Dunkin’ Donuts/convenience store transformation for the Elmesco Citgo Inc., gasoline and auto repair operation on Chestnut Street ran into some early rough weather at a Cold Spring Planning Board workshop meeting last week (April 17). Chairman Joseph Barbaro began the session expressing his carefully articulated reservations about the impact the change would have on the village. Other board members who either shared his concerns or had others to varying degrees joined him. 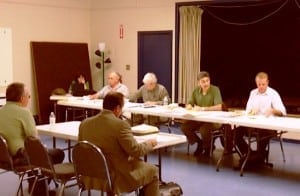 “I am skeptical,” pronounced Barbaro, as he recited his four principal concerns with the project. “First, there is the inconvenient truth of the Comprehensive Plan/Local Waterfront Revitalization.” Barbaro said that while the plan, which must be taken into account in appraising any project, did not exactly say, “thou shall not build a Dunkin’ Donuts, there is enough there to make us think about it a little more, perhaps even hesitate, maybe more than hesitate.”

Second, Barbaro said he was concerned about precedent. He said he thought Dunkin’ Donuts made a fine product, mentioning he recently bought a dozen for his office in Manhattan, “and they were as good as ever.” But he asked Elmes rhetorically what if the other gas station in town at the corner of Main Street and Morris Avenue wanted to put in a Burger King.  Or if a Pizza Hut was proposed for next to the Elmesco gas station or another franchise operation was also proposed for the Butterfield retail component.

The effect on local businesses was Barbaro’s third issue. “Usually I am a free-market, laissez-faire entrepreneurial man. Let the best man or woman win. On Main Street I think you have that competition. But Dunkin’ Donuts is a big corporation—that’s a different playing field and I think we have to take that into consideration,” he said.

Finally, Barbaro made clear the regard he and many in the community hold for Elmes himself.  “You are a great guy; everybody trusts you,” said Barbaro likening Elmes to a village doctor because of the many vehicles he has kept on the road over decades. “But what if you sold to someone else?  We have to be objective about the project, that is our solemn duty to the public,” said Barbaro. “I am keeping an open mind, I am just skeptical, Barbaro concluded.

The details of the operational plans of the proposal came into focus through questioning by Board Member Dick Weissbrod. The Dunkin’ Donuts franchise would be owned and run by Paul Sardinta, who currently has three other operations in northern Westchester. Two of them have Baskin-Robbins ice cream as well, but that addition is not contemplated in the current application.

The Dunkin’ Donuts, the convenience store and the gasoline station (both owned by Elmes) would be open from 6 a.m. to 10 p.m. The gasoline operation would revert to self-service. Sardinta said experience indicated the morning drive time, 6 a.m.–9 a.m., would be the busiest period for his side of the business. Elmes would still own the building but the lease agreement with Dunkin’ Donuts involves a 15-20 year lien on the property.

Weissbrod said his research suggested Dunkin’ Donuts was capable of different looks for its stores than the one currently being offered. He said he thought for the application to gain approval a major factor would have to be a store design consistent with the look of the village. He said he found a Dunkin’ Donuts online in Florence, Italy, that resembled Cold Spring’s Main Street. Weissbrod, who conceded the store’s look would ultimately be up to the Historic District Review Board, said he had the same feeling about the drive-thru component. “The bank has one (referring to M&T across Chestnut), it’s not a major sin, it’s what they look like that matters.”

Member Arnie Saari, pushing back on Barbaro’s reasoning, suggested the presence of Foodtown, Drug World, Frozenberry and Sunoco gasoline demonstrated that chain or franchise operations were already acceptable to the village. He said his reading of the new Comprehensive Plan didn’t render a clear outright objection to an operation such as Dunkin’ Donuts. Saari further questioned whether the board had the authority to reject an application on the basis of the term “franchise.” He requested the Planning Board ask the village attorney for an opinion on what authority the board had to address an application in this way.  “Current village law doesn’t address franchises. I assume Kenny’s doughnuts would be acceptable.  If the village intent is to not accept franchises, the Village Board should decide that,” he said. Saari also said he remained concerned about the plan’s approach to safety, water drainage, parking, and the impact on traffic. 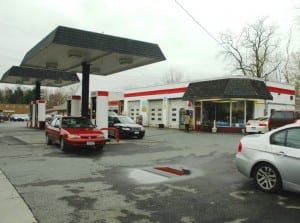 Newest member Jimmy Zuehl said he agreed with many of the comments his colleagues had made. He emphasized that while he wanted to follow the Comprehensive Plan strictly, he too found the language somewhat vague on the subject of franchises. He referred to section 4.1.6 of the plan which reads: “Recommendation: Within the village set limits to prohibit ‘big box’ stores and limit stores from large chains. Ensure franchise/formula businesses are compatible with the character of the village.” Zuehl also found the drive-thru for car pick up of doughnuts and coffee troublesome. He said that made for a site “even more about cars and less about walking.”

The traffic issue was put into historical perspective by life-long resident and long-serving board member Parge Sgro, who considers it the biggest concern. “We already have a problem at Benedict Street and 9D (Chestnut),” he said citing the Drug World mini-mall next to the Foodtown Plaza with the M&T Bank on the opposite side of 9D. Sgro pointed out most if not all the land parcels in this vicinity were generally non-conforming with village code as they were divided and developed before there was a code.  “If they were conforming, there would be sufficient parking. Now we’re trying to make something that is conforming,” he said referring to Elmesco.

Saari suggested, and the board agreed, to ask the applicant to provide a traffic study for the operation.  Elmes has often maintained there will not be more traffic than his service station has generated for years. When Barbaro asked Elmes if he could do without the drive-thru, he had Sardinta answer. “Sixty percent of the business is drive-thru, women with children, handicapped, people who just don’t want to stop, bad weather,” he said.

“It seems to me it benefits commuters from Poughkeepsie going to northern New Jersey,” said Barbaro. Barbaro said he would ask the village attorney for an opinion on franchises and the Comprehensive Plan as discussed and then the applicant would be asked to provide the traffic study.  He also requested that details regarding the operation of the stores and the gas sales be provided in writing. He said a formal detailed site plan review would begin when the board felt it was inclined to otherwise approve — “we’re not there yet.”
Photos by K.E.Foley, except as noted

16 thoughts on “Dunkin’ Donuts Gets Sour Reception at Planning Board”