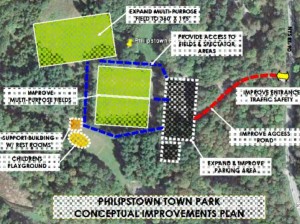 On Wednesday May 9 members of the Town Board, the Philipstown Recreation Commission and several members of the community participated in a workshop to continue their discussion of the plan to renovate and resurface a field at Philipstown Park. The meeting, one of many public meetings that have been held over the past several months regarding this issue, served as a next step towards the eventual solicitation of RFPs (requests for proposals) from vendors.

Supervisor Shea opened the meeting by praising the work of community member Joe Regele and Trustee Dave Merandy who have contributed much time and expertise to the planning process–Regele, by preparing and distributing the RFPs to the Board and Commission for their review, and Merandy for conferring (via questionnaire) with municipalities and school districts that have installed synthetic fields in order to gather empirical evidence of the benefits and pitfalls of their usage, upkeep and long-term costs.

Shea also noted that while the now formidable length and breath of this process wasn’t planned, he was pleased that the group was “giving this thing a really thorough vetting. All sorts of information is coming out, and viewpoints, and I think this is critical to the success of any large undertaking in town.” Currently two design-build RFPs are in the draft stage. One is for a natural grass field, the other is for a synthetic turf field with reconstruction, at this point, most likely to occur at the north field in Philipstown Park.

The RFPs are based on the need for a balance of both sustainability and affordability (over the long term) as each type of field comes with both benefits and drawbacks to these points. While a synthetic field can be used continually with very little upkeep and without regard to wet weather, the repair and replacement costs can be prohibitive–in addition to the much steeper installation price. There may be additional construction costs with a synthetic field, too, such as the need for transition areas between the field and the grass, paths for spectators and extra security measures.

Alternately, a grass field, while initially less costly and significantly more forgiving if it falls under disrepair, requires continual maintenance (fertilizing, cutting, seeding, aerating) as well as an irrigation system and a significant amount of water.

It is critical that whichever face the field eventually takes, it is constructed with proper pitch and drainage and so crowning and grading of the tract is required for all proposals. The RFPs also include allowances for consultant fees, since this project is essentially starting “from scratch” and there will be a need for surveyors, soil testing, and borings.

Merandy suggested that a third RFP be added to the lot to include provisions for repair to the other fields as well (fields all deemed substandard–or at least not in the finest condition). Recreation Director Amber Stickle concurred but suggested this additional information be solicited by way of an addendum to the original RFPs instead of an entirely new proposal.

For Regele, the need for expertise will be vital as the group begins to circle in on the acceptance of a proposal. “There needs to be some Clerk of the Works in place, some individual that has…knowledge about soil and rock…that can be in the position to act as the Owner’s Agent in this instance.” He also indicated the need for the final phase to “include some kind of professional review” in addition to assessments by himself and members of the town board and recreation commission. Members of the group will be reaching out to Town Engineer Ron Gainer for additional recommendation and counsel.

Although in seeming agreement about the need for field reconstruction, Merandy continued to press for a referendum on the issue stating that “[a referendum] builds confidence in the governorship of our monies.” Shea, however, considers this upgrade a necessity, not an option. “We own a resource. How we take care of the resource and invest in the resource effects the value of that resource. If we are going to keep a program running [at Philipstown Park] this isn’t a luxury. We have to address the fields. We own the fields. We have to maintain them. How we do that is we have to spend some money on them.”

Shea made it clear that the Philipstown Recreation Commission needed to get back involved in the process because eventually they would be in charge of it. “I’d like to sit down with the commission at some point and hit the re-set button,” he said. The group will gather again in the coming weeks to further review and discuss the RFPs with the hope of sending them out to vendors in the very near future.