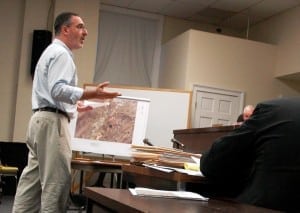 While about 60 residents, some visibly agitated, waited anxiously outside Town Hall on Monday (June 11), inside the building the Philipstown Zoning Board of Appeals heard a torrent of opposition to proposed soil mining in Philipstown.

Filling the meeting room, the largely critical audience encouraged the ZBA to reject the application by Lyons Realty for a special use permit to open a soil mine along Route 9. The mine would be located between Mill Road and East Mountain Road North, in Philipstown’s upper fringe. Owning 137 total acres, the company proposes to “disturb” about 33 acres for the mine and accompanying road.

Now wooded, the site is zoned industrial in part and residential in part. Those who opposed the mine included neighbors. The ZBA took no action other than to continue the public hearing at another meeting in July. Monday’s session was already a continuation of the hearing from May 14.

Along with about 110 members of the public (outside and inside), the hearing drew Philipstown Town Board Members John Van Tassel, Nancy Montgomery, and Betty Budney, along with Supervisor Richard Shea, who split his time between listening upstairs and fielding verbal brickbats outside from would-be attendees denied ready access due to space initiations in the hall. (Sheriff’s deputies at the doors allowed someone in as soon as another person left.) Shea suggested that the town move the next round of hearing, set for July 9, to a large Haldane school facility.

At present, the Lyons tract is the only site in Philipstown of potential mining, covered by a soil mining overlay district in the updated zoning code adopted in May 2011. The zoning code states that “mining activities require a special permit and are allowed solely in the Soil Mining Overlay District.”

Opponents focused on what they regard as likely unwanted by-products of the mine. “There’s never been any dispute about this project generating noise, dirt, traffic, and possibly, pollution. You cannot approve this without condemning this entire residential area and its hundreds of people to a future all too easy to imagine,” Eugene White told the five-member ZBA. “I’m not willing to accept to accept the risks that come with this and I certainly hope you aren’t either. Please reject this application.”

“We’re enormously concerned about the environmental impact,” said another neighbor, Toshi Yano, mentioning a host of other likely and unwelcome mining spin-offs, from traffic snarls to industrial-sized disturbances of the peace. “All these little things start to add up,” he said “I’d like to retire there [in his home] and not retire there as an insane person.”

Russell Cusick raised questions about water quality. “My biggest concern is having a soil mine in such close proximity to the Clove Creek aquifer and Clove Creek itself,” he said.

“We need a place that can foster a community that is going forward, not backwards,” another speaker, Hadrien Coumans, put in. “This [mine] is a step backwards.”

​​Some speakers questioned the legality of the zoning. “Under current New York State law, the mining overlay is illegal,” said Diana Hird. “The only way the overlay could be legal is if it benefitted the general welfare of the community and if it was part of a comprehensive plan. It meets neither criteria.”

Richard Butensky, an ardent foe of the mine, said “I can only see spot-zoning here … and that’s illegal. If it is improper at its base, then you have the obligation to turn it down,” he told the ZBA.

Butensky also dismissed the idea that the New York State Department of Environmental Conservation, (DEC) which regulates mining, would adequately safeguard the public. “We certainly should have somebody looking out for our interests,” he said.

Tony Bardes, who unlike many at the hearing does not live near the proposed mine, took a different tack. President of Citizens of Philipstown, a group formed largely in opposition to the rezoning in 2009, Bardes pointed to the “ton of input” from the public that went into the ultimate rezoning document. He described the new code as a good one, reflective of the community. “I urge you guys to follow the zoning,” he said to the ZBA. He added that the Lyons family has “always operated with integrity. And the DEC is doing a wonderful job protecting the environment and they’ll be overseeing what’s going on here. I believe they’ll take care of it.”

From a different perspective, Frederick Turner, a lawyer for Butensky and others, also asked the ZBA “to apply the code. I would say that under your local zoning code this application falls far short.” Along with threats to wetlands, Clove Creek (which he described as trout-spawning), and homeowner wells, he predicted difficulty with air pollution as a consequence of the mine.

The Putnam Highlands Audubon Society (PAS) commented, too. “We are opposed to a special use permit” for the mine, said the organization’s representative, Connie Mayer-Bakall. “We believe the need has not been established” for mining.

Seeing the mine as unobtrusive

Representing Lyons Realty, Glennon Watson, president of Badey and Watson Surveying and Engineering P.C., emphasized the modifications already made in the mining plans to accommodate residents’ and ZBA concerns and said the mining operation would be unobtrusive. “You can see clearly that the mining operation will be hidden,” he said.  He also said the operation would entail “extraction of unconsolidated materials” but not rocks. “It’s not a quarry,” though it would produce “a hole,” he said. According to Watson, “there’s no intention of filling up the hole” but ongoing reclamation will occur.

Throughout the hearing, ZBA members mostly listened, offering a few comments at the end. One member, Bill Flaherty, noted that the DEC has said it anticipates “no adverse impact on critical environmental areas,” a finding that “we can’t just file and forget.” In any case, he said, “nobody wants to deface a mountain. We see that in Fishkill. That’s not going to happen here.” At the board level, he added, “I think we all are concerned about this and are going to make a decision in the best interest of all.”

A debate outdoors, too

While the hearing continued inside, Shea engaged in a long debate outside with Butensky, who likewise moved from one venue to the other over the course of the evening. Again, Butensky questioned the overlay and process that developed it.

As a town government, “you have the right to create an overlay,” Shea responded. He said that the mining overlay in fact predated the new zoning code by about three years and evolved from discussions that began around 2005. “It was thought out for a long period of time” and then “the decision was made by the [Town] Board that this should be allowed in this town,” he said. Thus mining “is, right now, a permitted use in the Town of Philipstown.”

At the beginning, a far larger area was proposed for mining, but town officials reduced that extensively, he said. “We went from 50 square miles in play to essentially 23 acres in play.” Moreover, “there had always been soil mining; it had always been in town,” Shea observed. “I’m not either defending it or speaking against it.”

“The town didn’t have to have mining at all,” Butensky shot back. “When we set up the new zoning, we could’ve had no mining.” He warned of a lawsuit if the ZBA grants a special permit for the mine. “If they do approve it, then the town will have to fight against all of us, because we’ll challenge this because we feel it is illegal spot zoning.”

Shea, who also lives in the general vicinity of the proposed mine, assured the residents that “I’m not trying to negate anyone’s concerns here. These are all valid arguments; I’m not going to deny it.”  Asked how they might affect the decision, he urged them to “get up and voice your legitimate concerns. Those things need to go in the record … need to be taken into account.”

After the hearing adjourned and the crowds inside and outside dispersed, he told Philipstown.info that “I’m glad people turned out. It’s an important issue, an important decision. Everyone wants to see what’s best for the town.”

4 thoughts on “Opposition Grows to Proposed Soil Mine”