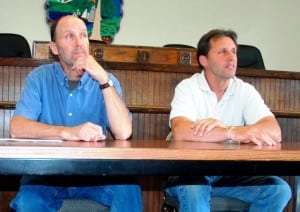 Nine days after opposition to proposed soil mining in Philipstown produced riveting testimony within and outside Town Hall, the applicants behind the controversy withdrew their request for permission, derailing the mining venture. Philipstown Supervisor Richard Shea announced the pullback by Nathan and Ernest Lyons, of Lyons Realty LLC, at a news conference Wednesday morning (June 20) in the same room that had seen a crowd denounce the mining idea at a Zoning Board of Appeals public hearing on June 11.

“Out of their concern for the town, concern for a lot of things, they’ve come to the decision that they’re going to withdraw their application for the mine,” Shea told the press and audience of about a dozen. “There are no plans for that property right now. That’s it for now.” Nathan and Ernest Lyons told Shea of their decision in a June 19 letter that succinctly stated that “as equal partners of Lyons Realty we wish to withdraw our application to soil mine.”

Lyons Realty had sought a special use permit to open a soil mine along Route 9, between Mill Road and East Mountain Road North, in Philipstown’s upper fringe. There, the company owns 137 acres and had intended to “disturb” about 33 of them for the mine and accompanying road. Now wooded, the site is zoned industrial in part and residential in part –- and nearby homeowners were among the mine’s adversaries. Various critics predicted a host of unwelcome by-products, including water, air, and noise pollution; heavy traffic, and destruction of the area’s tranquility; raised the spectre of “spot zoning,” and threatened legal action if the ZBA approved the application. Covered by a soil mining overlay district in the updated zoning code adopted in May 2011, the Lyons tract is currently the only site of potential mining in Philipstown. The zoning code states that “mining activities require a special permit and are allowed solely in the Soil Mining Overlay District.”

Shea said “I’m sure” that proposals will come before the Town Board to changing the zoning code and outlaw mining entirely in Philipstown. He declined to predict the outcome. “That’d be a board decision. I would not speak for the board.”

Nathan Lyons joined Shea at the news conference, but let the supervisor do most of the talking. Lyons did say that the family had incurred “quite a bit” of expense in the approval process, though he disclosed no amount. He said that public comments had contributed “a little bit” to the decision to scrap the project. Overall, he added, he didn’t expect the level of reaction – some of which grew quite vitriolic. In trying to proceed with their plans, “we did everything according to what the state wanted and the town wanted,” he said.

Shea mentioned the controversy in his opening remarks and defined the hearing process as an opportunity for applicants to disseminate plans publicly and for residents to comment on them. “That public hearing process is supposed to strike a balance,” he said. “What it’s not is a time to level personal attacks. And unfortunately during this process we saw some of that. We also saw some really thoughtful comments. That’s what it’s for. I would like to think that the decision the Lyons family came to is based on those thoughtful comments.”

​He encouraged the public to consider the implications of the withdrawal, touching upon the Lyons’ property rights, right to make a living in the town, and consideration for their neighbors. “People need to think about the huge concession that’s been made here,” Shea said. The decision, he added, “is just a continuation of the long history of the Lyons family being extremely considerate in this town and doing the right thing. They live here. They work here. They plow the firehouse. They give donations. Those things can’t be forgotten also. This is a good family. I stand by them as I have all along.”

He blamed the ease and speed of Internet postings for some of the rancor. “With that power comes an obligation to be more thoughtful in your commentary,” he said, calling some of what happens with the Internet “disturbing. Those comments can have major consequences, especially in a small town like this.” 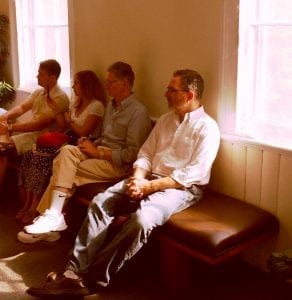 Responding to questions from the press, Shea also attributed some of the adverse reaction to the mine to a tendency to overlook zoning provisions and only pay attention when a relevant item lands on a town agenda. “When [something] comes up for an application, that brings a focus to it,” he said. But “people need to take a look at the zoning and go through the document. Part of your responsibility in a democracy is to educate yourself.” He pointed out that “we’ve always had mining operations in the town. We still have mining on the books.” Some applause from non-news media attendees greeted the announcement of the application withdrawal. However, Shea did not take questions from the audience.

As the press conference broke up, Richard Butensky, a leader of the opposition to the mining proposal, said he was “overjoyed” at the outcome.  “I am grateful to the Lyons family and to Richard Shea that the project is not happening.” Sam Tallerico, another opponent and a neighbor of the site, described himself as “ecstatic” at the news. “”We thank the Lyons for their decision and wish them all the best.”