Michael Junjulas was elected Haldane school board president and Gillian Thorpe was re-elected as vice president. (Photo by M. Turton)

At its July meeting, the Haldane Board of Education got down to business as it reorganized for the upcoming school year. As expected, Michael Junjulas was elected president by his fellow trustees, and Gillian Thorpe was returned as vice president. Junjulas replaces Joe Curto, who did not seek re-election. The newest trustee, Jon Champlin, took the oath of office, having won a seat on the board in the election held in May.

Trustees approved the ad hoc Athletic Field Committee’s request to begin fundraising to support major improvements to Haldane’s main sports field. The field, located on Route 9D just below the school, is currently used almost exclusively for football. The $2 million project hinges on the fact that it cannot result in any increase in taxes to local rate payers.

One of the project’s major features will be installation of artificial turf, which will mean the field can be used intensively, year-round. Use of the upgraded field will include such activities as lacrosse and physical education. The latter has been hampered for years by the lack of an all-weather, year-round facility, with the elementary and middle schools often having been limited to indoor physical-education classes.

In order to qualify for close to $700,000 in state aid, the project must include improvements to indoor facilities as well. Those upgrades will include replacement of lockers, some of which date back to the 1960s, along with improvements to the auditorium. In addition to financial support through private fundraising, which can include in-kind donations of services and materials, the board has proposed the sale of 10 acres of excess land off of Cedar Street. Sale of the James Pond property could raise more than $400,000 and must be approved by voters as part of a public referendum on the entire project. That vote will likely take place in the fall. 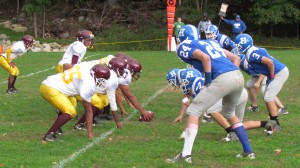 Fundraising is underway for major improvements to Haldane’s main sports field, which will allow it to host many activities in addition to football. (Photo by M. Turton)

The land sale would also be contingent upon the school district retaining the right to use part of the property for such purposes as parking and continued use of the pond area as an outdoor classroom for environmental programs. Superintendent of Schools Mark Villanti has stressed the importance of the land sale to the success of the project as proposed, saying that if the land is not sold, reducing the project to a $1.6 million budget, it would be a “drastically different” initiative.

It looks like Haldane students will be playing high school hockey in the upcoming season, although it won’t be on a Blue Devils team per se. Trustees approved a three-way merger, which will see players ​​​from Haldane, Putnam Valley and John F. Kennedy High School in Somers form a team that will play its home games at the Brewster Ice Arena. The proposal must still be approved by BOCES and the New York State Public High School Athletic Association. Haldane ​athletic director Tom Cunningham said that as many as six Haldane high school students have expressed interest in playing. He also said that seventh- and eighth-grade players could also be considered on a case-by-case basis, as they are in other sports.

The new team will not result in any costs to the Haldane Central School District according to Villanti, who said that transportation, uniforms, equipment and all other costs will be the responsibility of the players and their families. The cost per player was about $950 last season. The new team will compete against squads from Pawling, Carmel, Fox Lane, Mahopac, Brewster, Lakeland/Panas, Yorktown, Sleepy Hollow/Irvington, Byram Hills, Ossining and Somers/North Salem.

One thought on “Junjulas Elected Haldane School Board President”