Michael Junjulas was recently elected president of the Haldane Board of Education by his fellow trustees. Earlier this week, he spoke with The Paper‘s Michael Turton at 69 Main St. about a wide range of school board issues. Their conversation has been condensed and edited.

The Paper: What do you do for a living?

Junjulas: I work for the U.S. government; I supervise aircraft mechanics at Stewart Airport.

The Paper: How long have you served on the school board?

Junjulas: This is my 10th year. In 2008 I stepped down as president for health reasons.

The Paper: What was it that got you interested in running for the school board initially?

Junjulas: There was no representation for the elementary school on the board.

The Paper: Superintendent of Schools Mark Villanti is a big fan of Abraham Lincoln, and you’ve joked at times about preferring Ronald Reagan. What was it about Reagan that you admired?

Junjulas: His fiscally conservative side. He was a great president.

The Paper: Do you think that influences you as a trustee — and now as president?

Junjulas: No. I don’t use politics on the board at all. But I can be fiscally conservative. You can’t continually be asking people for more money.

The Paper: Were you surprised how close the last school-board election was?

Junjulas: I was very surprised. I was surprised that Evelyn Carr-White didn’t get on. I hope she runs again and takes my seat.

The Paper: What do you see as the biggest issues the district faces going into this school year?

Junjulas: The budget. I want to start talking about it early in the year. We have to be ready if we have to make cuts. The board retreat is Aug. 26, and the number one thing I’m bringing is that we have to talk about the budget.

The Paper: How optimistic are you that state funding will improve any time soon — when they have their own issues to deal with apart from education?

Junjulas: I’m not. I don’t think we’ll get any help from the state whatsoever. If there is any money to give out, it will go elsewhere. We’re considered a wealthy district.

The Paper: How real is the issue of unfunded mandates? Aren’t taxpayers going to pay for education programs regardless of whether it’s local or state taxes that pay the bill?

Junjulas: It’s a huge issue. It has been since I’ve been on the board. If they want to mandate us to do something — then give us the money to do it. I don’t think the state government is listening. They don’t hear when it comes to unfunded mandates.

The Paper: Trustee Peter Henderson has said that if state funding does not improve, he will ask for a voluntary wage freeze for all staff. Is that something you will support?

Junjulas: I’d have to see how the numbers come out. Most school districts have renegotiated if it comes to staff cuts. I believe if we have to look at cutting teachers, they will come to us. But there are things we have to consider. We need a “doomsday” (worst case scenario) budget.

The Paper: Do you have personal goals you hope to achieve as president?

Junjulas: I’d like to get the budget started early so that we’re prepared and ready to go. I don’t want us to be scrambling. I think it’s going to be a rough year. I’d like to see the land sale (James Pond) voted on and see what the public thinks one way or the other.

The Paper: It seems a tall order to fundraise for improvements to Haldane’s main sports field in this economy. Do you think it will get done?

Junjulas: It was a breath of fresh air last meeting to learn they have $100,000 already earmarked. There is a push. I think it has to get done — but with a zero increase in taxes. If we don’t sell the land (James Pond) … I don’t know.

The Paper: You, Joe Curto and Dave Merandy are credited with having made the school board much more transparent. Is the board completely transparent now, or are there still aspects that could be more open?

Junjulas: I think we’re 98 percent transparent. I think sometimes getting the information out to the public isn’t as quick as it should be. The information is always there; we just need it out there sooner.

The Paper: In terms of the educational issues, what interests you most? 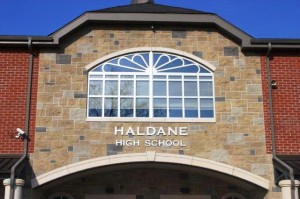 Junjulas: I’d like to expand the iPad initiative if we can. From using it — it’s the way to go. At one of our workshops I’d like to see what the teachers are using it for. Middle School acceleration is the elephant in the room. It’s needed. The goal is to get students ready for high school. No one wants to talk about it. It’s like BOCES. No one wants to go there. … People say, “He can’t handle school.” I think it’s excellent. More (students) should go there.

The Paper: Education across the country is often criticized, especially in the areas of math and science. As someone who has kids in the system, where do you think education needs to improve most?

Junjulas: As a parent I’d like to see BOCES come in and teach trades. There has to be a balance across the board — math, science, advanced placement — but trades too. People are looking to hire tradesmen, and they aren’t there.

The Paper: Sports are obviously a big part of Haldane’s history and culture. Do you ever worry it’s too big?

Junjulas: We put a cap on teams last year: no new teams are to be added. You can’t just keep adding teams with the same number of kids. We’re at that balance point now — if something is added, we need to take something away.

The Paper: Bullying seems to be in the national news almost every week, and it is getting more attention at Haldane of late. Has bullying become more common, or are people just paying more attention to it now?

Junjulas: I think it’s because of the Internet; there’s more bullying online.

The Paper: Mark Villanti has said he will be retiring within a couple years. He has received very good reviews from board members. When the time comes to replace him, what’s the number one trait the new person must bring to the job? 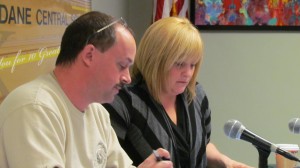 Junjulas with Gillian Thorpe, who was re-elected as vice president. Photo by M. Turton.

Junjulas: To be a lot like Mark. He’s a people person. He goes to events. He’s very visible. It shows he cares about the school. He’s an honest person. If you ask him why your son isn’t on the team, he’ll tell you. And his hiring skills are unbelievable.

The Paper: You’ve said you won’t run again. Do you think you’ll stay involved in the community after you finish serving on the school board?

Junjulas: Very much so. Probably more so. I’ll probably go back to being an active member at the fire house; I’m an associate member now. I can’t run for municipal office because of the Hatch Law [which excludes federal employees from holding public office].

The Paper: What part of being a trustee is the most fun for you? What do you really get a kick out of?

Junjulas: The camaraderie I guess. I enjoy working with people. And the budget, to be honest with you.

The Paper: What’s the last book you read for fun?

Junjulas: The Confession by John Grisham. I love lawyer books.

The Paper: What’s on your favorite kind of pizza?

The Paper: One area where the district has saved money recently has been in hiring young teachers when older, veteran teachers retire. How satisfied are you that new, less experienced teachers are providing quality education?

Junjulas: Right now, with this economy there are a lot of applications, and you can do that. I think they have done well under the administrative team we have. And I think there’s an advantage to having a new set of eyes — to change things around a bit.

The Paper: If you could make one or two improvements at Haldane — apart from the sports fields — what would you most like to see?

Junjulas: On the facilities side we need to get the lockers done. And something that’s dear to my heart — I’d love to see an orchestra at Haldane.

The Paper: What are you looking forward to the most in the upcoming school year?

Junjulas: I’m looking forward to working with Mark again. And getting things done.

The Paper: What are you dreading most?

Junjulas: The budget. If we have to make cuts, where do we make them? Kindergarten? Staff?

The Paper: You graduated from Haldane High School in 1987 — 25 years ago. How much has life changed for students there since then?

Junjulas: I can honestly tell you there haven’t been a lot of huge changes. It’s still a small, K-12 school. When you go there you know everybody. There are some teachers still there now who taught me.