I try to shop mindfully at the farmers’ market — “mindfulness” being the new/ancient approach to finding balance and contentment in daily life. But, try as I might, I get distracted and my mind wanders off like a toddler in a department store, and by the time we are reunited, my bags are full of things that do not add up to a week’s worth of coherent meals.

Yet last Saturday, something serendipitous occurred. I realized when I got home that, by chance, I had bought exactly what I needed to make a dish that had been one of the highlights of my summer cooking stint: Thai beef salad. Only this one would be much, much smaller.

When I tell people how many kids I cooked for at that sleepaway camp (180), they often say, “How’d you do that?” (or something to that effect). 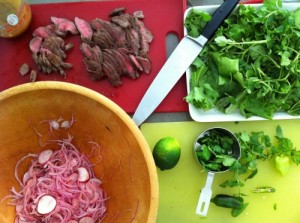 “It wasn’t hard,” I reply. And it wasn’t, though in truth, when I look back, I’m not sure how that’s possible. Sure, it helped that there were four of us at a time in the kitchen, so each of us was in charge of two dishes, maybe three, tops, and that we had 2 1/2 hours to prepare most meals.

Still, when I do the math — four cooks plus 2 1/2 hours — it does not add up to an elaborate, often exotic, multi-dish meal for 180, including options for the gluten-free, dairy-free, and vegan contingents. So I suspect that something magical was at work in that kitchen, too. Kitchens are like that, you know.

On this particular day, I arrived to find that the lunch menu on the blackboard had not quite gelled. The list read: Pad thai, option with tofu? sautéed green beans — ginger?, some kind of salad, plain rice (we always had something for the kids who preferred their food flavor-free), fresh fruit, water + juice. Lily, the head cook, said, “We need a meat thing for the meat-eaters.” She is 22, and one of the coolest people I’ve ever met.

“How about Thai beef salad?” I suggested, having eaten it back in my own 20s when my friends and I would venture onto the dark streets near Chinatown in search of southeast Asian food. Like many of the dishes we ordered and shared, this salad spun my head around, it was so good. But I’d never tried making it myself, not even for five people.

Lily asked what I needed for it. “Lime, probably,” I said, trying to conjure up a memory of the dish, “and cilantro and mint. Red onions, soy sauce, fish sauce, chilis … um … some kind of greens?”

The mint grew near a pasture by the lake. I went out and collected a giant colanderful (other dishes would need it, too), then got to work, preparing the rice, slicing the onions, sautéing the beef. 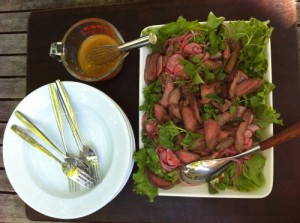 Two hours later, everything was almost ready and some campers bustled in to set the tables. I tasted the beef salad. “It’s good, Lily,” I said. “Try some.” But she could never eat until the meal was underway, and she was sure that we’d pulled it off.

Still, I was right: The beef salad was good. Many raved about it, and one girl, a New York City kid, came back for fifths.

I was putting away leftovers when I spied Lily sitting on a shelf tucked beneath one of the counters, eating my salad. She looked at me, nodded slowly, and said, “Freakin’ Thai beef salad.”

It was the best compliment I got all summer.

At the camp, I didn’t marinate the beef — it’s quicker that way, but it tastes nice if you take the extra step. My son George described this dish as “something you could just crave all the time.”

zest of 1 lemon or 2 stalks lemongrass

1. If you’re using lemongrass, trim off the root end and outer leaves, then thinly slice the bottom 6 inches of the stalk. Place it or the zest, the soy sauce, fish sauce, sugar, and oil in a blender and blend well. Measure out 3 tablespoons of this mixture into a shallow dish and add the garlic, then add the flank steak, turning it in the marinade. Cover and refrigerate for 1 hour, or up to 6 hours.

2. Add the lime juice to the remaining dressing; taste for seasoning, adding salt and pepper as needed.

3. Slice the onion as thinly as possible. Combine the lemon juice or vinegar with equal parts water and soak the onion in this mixture.

4. Remove the steak from the marinade; discard marinade. Heat a grill pan or skillet over high heat for 30 seconds; add a drizzle of oil then the steak. Sear both sides until well browned, then lower heat and cook to desired doneness. Remove steak from skillet and set aside to rest for 10 minutes. Slice thinly against the grain. Toss with about half the dressing.

5. Arrange the lettuce on a platter. Remove the onion from the marinade; drain and toss together with the radish, cucumber, watercress, herbs, and chili in the remaining dressing. Arrange the onion-watercress mixture over the lettuce. Top with the beef.