The first annual Putnam Cycling Classic, a ride for serious recreational cyclists, will begin and finish in Cold Spring on Sunday, Oct. 14. Intended to simulate a professional racecourse like the Tour de France, the ride will take cyclists throughout Putnam County and will showcase the Village of Cold Spring in particular. 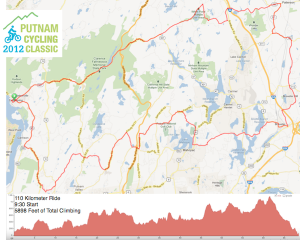 Both long and short routes start on Main Street in Cold Spring, go south on 9D to Route 403, then west on Sprout Brook and Peekskill Hollow Roads. The long route continues west on county roads past Lake Mahopac, turns north at Brewster toward Patterson, then comes east along Farmers Mills Road and Route 301 back to Cold Spring. The short route continues on Peekskill Hollow Road to 301 to rejoin the long route.

John Eustice, of Sparta Cycling Inc., presented to the Village Board at its workshop on Tuesday (Sept. 25) for approval to start and finish the ride in Cold Spring. The event will bring in about 200 to 300 cyclists and their families and friends, with media coming to document it. The group, said Eustice, consists of serious cyclists who know what they are doing and who will be a boon to the area.

The ride will require the closure of streets for varying periods of time in the village and in the county along both the long route and the shorter one for the slower groups (of course allowing emergency vehicles at all times). In Cold Spring, the race organizers requested that part of Main Street, from Kemble Avenue and Garden Street up the hill to High Street, be closed to traffic for the duration of the ride and its setup, from 6 a.m. to about 3 p.m.

When the cyclists are not starting (between 9:30 and 9:50 a.m.) or finishing (11 a.m. to 2 p.m.) on this portion of Main Street, the area will be open to pedestrians and spectators. Eustice explained that the families and friends of cyclists often remain in the village where such rides begin and end, shopping in the stores and patronizing its cafes and restaurants. In addition, the cyclists themselves treat such events as day trips to beautiful spots in the country, often becoming enchanted with the region and returning to visit again. Metro-North, one of the ride’s sponsors, will run dedicated trains from New York City to Cold Spring for visitors to spend the day. 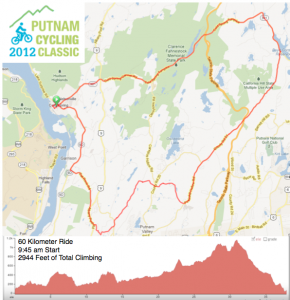 In addition to the Main Street closure, side streets such as Church and High Streets and Kemble and Marion Avenues, as well as portions of Routes 9D and 301, will be closed for brief periods during the event. Eustice would meet with the police department on Thursday (Sept. 27) to finalize the race route and traffic detours.

The Village Board voted to approve the start and finish in Cold Spring, pending approval of the final route by the police officer in charge.

For more information about and to register in the Putnam Cycling Classic, visit putnamcycling.com.