Twenty-two years ago, broccoli became the poster-child for unloved vegetables. That’s when the first President Bush announced to the world that he didn’t like it one bit, and, having at last attained a position of authority, would never allow it to appear on his plate again.

Many people criticized him for this statement, but to me, it seemed like a great way to inspire America’s youth to work hard and aim high so that they, too, could someday become Leader of the Free World and thereby protect their own plates from invasion by undesirable vegetables.

Who wouldn’t want to be able to do that? 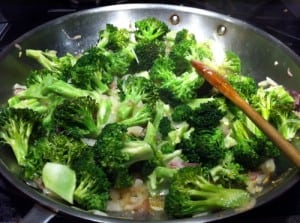 Yet an informal survey suggests that, given such power, few kids would squander it on broccoli, which is fairly popular as vegetables go. (Not even the Supreme Court’s recent attempts to negatively equate broccoli with healthcare have undermined that.) It’s a fine bit of news for parents, because broccoli is one of those crazy-good-for-you foods: one cup of raw broccoli has 135 percent of the vitamin C you need in a day, 20 percent of your vitamin A, plus folates, minerals, and phytonutrients that actually prevent the formation of certain cancers.

Wow, right? Except the last time I was capable of choking down a whole cup of raw broccoli was back when I was in college, and valued food for little more than its ability to keep me functioning without making me fat. I can still recall the sustained chewing required to get through my daily allotment of fibrous stalks and gravelly, green buds. These days, I’m happy to consume a few florets here and there, but more than that I cannot take.

Nor am I a fan of steamed broccoli, unless it’s eaten right away — literally within minutes of taking it off the heat. As it starts to cool, its malodorous nature emerges. This is due to certain compounds in the vegetable’s cells that, when combined, create sulfurous gases.

Cooking actually intensifies those gases, which is why your house has a funny smell when you prepare broccoli. Unless you overdo it, that is — which, I confess, is my favorite way to make it. Yes, it’s true: I like my broccoli cooked until its bright-green hue turns a sad olive-drab, its texture is nearly melting, and its smell — well, I don’t know if it actually dissipates or I merely grow accustomed to it after all that time.

You can’t just overcook broccoli any which way, however. You must do it in olive oil. If you do it in water, it turns totally mushy and gross. But overcook it in warm olive oil, with onion and garlic, and it becomes silky and mellow, and holds its shape. Broccoli prepared this way makes a lovely weeknight pasta sauce or an excellent topping for pizza, with fontina and some grated parmesan or pecorino sprinkled over it. 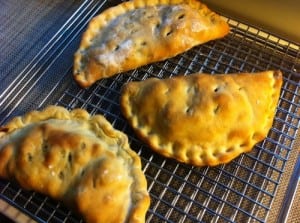 Last Saturday morning, I made pizza dough — no, wait, that’s a lie. My kids made pizza dough, a process they like so much that I would have to lock them up if I wanted to do it myself. As it was, I had to use my sternest voice to insist they give me a turn at kneading. The finished pizza dough was then transformed, by my 11-year-old son, Henry, into half a dozen gorgeous calzones. I love watching him cook. He brings to the task patience, talent, insight, and artistry — skills that would be wasted if he ever ran for political office. Here’s hoping he never tries.

Calzones with broccoli, fontina, and walnuts

The 1 cup olive oil (for the broccoli) seems like a lot, but you drain it after cooking, and can re-use it to sauté other vegetables.

For the pizza dough:

Combine the warm water, yeast, and one cup of the flour in a large bowl, and mix thoroughly. Let stand for 5 minutes, then add 1 ½ cups more flour and the remaining ingredients and mix until the dough comes together. Turn it out onto a clean, floured surface and knead about 5 minutes, until soft and elastic, adding more flour as needed (the dough should be slightly sticky).

Form the dough into a ball, and place in a lightly oiled bowl. Cover with plastic wrap and leave in a warm place about 1 ½ hours, or until doubled in size. Transfer it to a work surface, and cut in half. Wrap up one half to freeze and use later. Divide the other into 4 to 6 pieces, depending on the size of the calzones you want to make, and keep covered with a damp towel until ready to use.

4 crowns broccoli or about 8 cups

Trim the ends off the broccoli. Cut off the crowns then break or cut them into medium-small (1 ½–inch) florets. Pare away the fibrous outer layer of the stalks, and cut into 1-inch pieces. Heat 2 tablespoons of the olive oil in a large skillet over medium heat. Add the onions and cook until starting to soften, about 5 minutes. Add the garlic, cayenne, salt (be generous) and pepper, the broccoli and the remaining olive oil.

Cook about 10 minutes, stirring occasionally, then add the broccoli florets and remaining olive oil, and turn the heat to low. Cook, stirring gently from time to time to keep the vegetables from sticking to the pan, until the broccoli is soft but not disintegrating, 30-40 minutes. Transfer the broccoli to a strainer set over a bowl and allow the oil to drain off and the broccoli to cool, 30 minutes to 1 hour. (Keep the oil if you’re using the broccoli as a pasta sauce.)

To make the calzones:

Place a pizza stone or upturned baking sheet on the lowest rack of the oven and preheat to 500 degrees. When it’s cool, combine the broccoli with the two cheeses and walnuts. Roll out one ball of the dough into an 8-inch circle. Place a scant 1 cup of the broccoli mixture on one half of the circle. Fold over the other half, and pinch together the edge of the pastry (dampen the edge with a little water to help it seal). Poke vent holes in the dough with the tip of a knife. Bake about 10 minutes, or until golden brown on the outside. Serve warm.