Citing savings to both money and the environment, Philipstown Supervisor Richard Shea last week revealed that the town intends to pave trouble-prone dirt road sections in 2013. He commented Nov. 8 as the Town Board continued drafting the fiscal 2013 budget, which takes effect on Jan. 1 and which the board expects to complete on Tuesday, Nov. 20.

Based on submissions from the town’s units and departments, the preliminary Philipstown 2013 budget shows a 2 percent increase to $8,997,052 from fiscal 2012’s $8,815,276. However, as Shea noted several times during the deliberations, final figures on many budget lines remain undetermined and he expects the ultimate total to go down.

One way to cut costs is to pave parts of rural roads, he asserted. He and Town Board Member John Van Tassel cast the argument in terms of not only saving nature, lives, and property as well as dollars.

According to Van Tassel, paving dirt roads “is a life-saving issue.” Even without flooding and other hurricane damage, the roads can be difficult for emergency vehicles to use, he said. “If the road is nonexistent, it’s really impossible. There’s a chance where you’re going to have a problem of someone losing their life or home because an ambulance or a fire truck couldn’t get to them.”

Moreover, dirt roads tend to wander or vanish over time, especially in storms, Shea said. “It’s very tough to make them stay put. They are material-intensive; they are capital-intensive” and demand inordinate attention “to the detriment of other parts of the town,” he said. “We as a town cannot afford to keep doing what we’re doing. We’ll have discussions, we’ll listen to people. But there’s going to be paving this [coming] year. I’m not going to mince words. I’m not going to lie. It’s going to happen.” 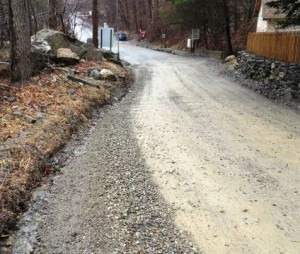 As the supervisor outlined it, likely targets include the Saunders Hill stretch of Old Albany Post Road, a separate patch of Old Albany Post Road, and the western end of South Mountain Pass, along with sites in Continental Village. In general, the town will focus on areas “where we’ve had no success in maintaining the drainage because everything just washes out,” Shea explained, giving Saunders Hill as an example.

“We spend $50,000 on drainage and then during a big storm we watch it just disappear; it goes down into the brook.” He acknowledged that such a paving project “is anathema to some people. But it’s in all likelihood going to happen. We can’t keep watching pollution [occur] and the surface disappear.”

Like Saunders Hill, Shea said, South Mountain Pass, climbing uphill from Route 9D, “has been a perennial problem. No matter what we’ve done on that hill over the years, it has just not saved it.” He also mentioned Old Albany Post Road “going down toward Chapman and Canopus,” where the road “washboards out. It disappears,” despite thousands of hours of work and application of additives to strengthen it.

And treating road surfaces raises other questions. “People think of dirt roads as being green,” Shea observed. “They’re not. They use chemicals 12 months of the year. It’s a constant source of not only physical pollution but chemical pollution.”

Besides, Shea warned, the Federal Emergency Management Agency [FEMA] will not provide funds indefinitely for reconstruction of dirt roads. “The only way you’ll get funding in catastrophic events, hurricanes, through FEMA, going forward, is if you make a permanent improvement — i.e., pavement,” he said. “I’m not trying to disparage dirt roads. I lived on a dirt road for many years. Now that it’s paved, I’m happy.”

Town Hall at the American Legion

Bringing up another budget and infrastructure topic, Shea reported that the town continues to explore the possibility of revamping the American Legion property on Cedar Street, behind the Town Hall grounds, as a multipurpose complex. It could house both the local legion and the Veterans of Foreign Wars posts, contain some town government offices, feature a large public meeting space accessible to those with physical handicaps, and accommodate a consolidated local justice court system, he said.

The idea also involves potential use of an unoccupied town-owned house behind Town Hall for a wounded veteran, sale of the current VFW building on Kemble Avenue, and, perhaps, partnering with Putnam County on some aspects of the overall project. “It could meet everybody’s needs,” Shea said of the envisioned complex. In essence, the concept constitutes a “Plan B” if the controversial Butterfield Hospital redevelopment, whose plans include a multi-government building, does not go through.