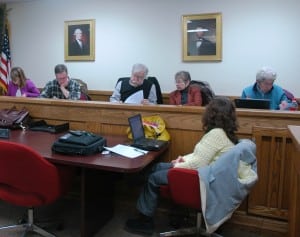 The Cold Spring Historic District Review Board voted 4 to 1 on Wednesday night (Dec. 19) to allow demolition of the former Butterfield Hospital building. As conditions for its approval, it demanded a professional architectural and historical photographic survey of the structure before demolition and retention and re-use of an interior memorial arch from the hospital.

In a resolution it continued to cobble together as it deliberated, the board based its decision on a lack of sufficient historic architectural merit to warrant saving the hospital — a conglomeration of 1925, 1941 and 1963 pieces, with the latter obliterating much of the original ’20s construction. Because HDRB members often had seemed opposed to demolition of the building, describing its links to significant figures from the past and architectural relevance, the vote came as a bit of a surprise.

Paul Guillaro of Butterfield Realty LLC, the property’s owner, publicly thanked the board after the vote, commending its hard work.

The action capped several months of uncertainty about Guillaro’s request to remove the hospital, a key element of his plans to create a complex with three single-family homes, multi-government municipal building and senior-community center, post office, condominiums for retirement-age buyers, and commercial “square” along Route 9D.

The Butterfield parcel lies within the village’s historic district, over which the HDRB exercises jurisdiction. The property’s fate has been discussed at numerous, often tense forums, including a Dec. 18 meeting of the Cold Spring Village Board, where some residents objected to various aspects of Guillaro’s plans or to village decision-making associated with the project.

The board termed demolition “appropriate to the purposes for which the historic district was created. The condition of the structure and the history of changes during radical expansions eliminated the more significant architectural features of the building. There is, accordingly, little left of the structure worthy of preservation.” Furthermore, the board declared, “the condition of the building is largely beyond effective salvage” and its “removal does not do damage to the [historic] or nearby parcels.”

Zgolinski said he voted against demolition because, given the mandate of Cold Spring’s historic preservation law to protect the district’s historic resources, “to me it is unambiguous that history matters in our historic district. I find the building is associated with personages who had a significant impact on the history of Cold Spring” and that portions were designed by notable architects. “Most importantly, I find that the Butterfield Hospital, when it was operational, was a significant civic institution in the village.”

He also maintained “that the onus of proving that the building is not historic is on the applicant.” In this case, which he called “the most arduous” of his tenure on the HDRB, “the applicant has not demonstrated that demolition is justified,” he concluded.