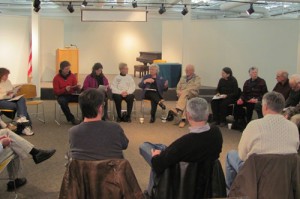 Galef and constituents at a previous Town Meeting at the Desmond-Fish Library in Garrison (Source: Assembly website)

Assemblywoman Sandy Galef, representing New York’s 95th District, will hold “Town Meetings” throughout the district to communicate what is going on in Albany and to gather ideas and suggestions from constituents on what needs to be done to improve the state. The meetings will take place in Ossining, Garrison, Peekskill, Kent and Croton-on-Hudson.

Galef’s Town Meeting in Garrison will take place at the Desmond-Fish Library on Saturday, Feb. 2, from 11 a.m. to 12 p.m., followed by a panel discussion entitled Campaign Finance Reform: Time for a Change, from 12:15 to 2:15 p.m. A panel of three experts will speak on how campaign finance reform has changed elections in New York City. (See Galef’s Letter to the Editor below for more information on the event and on campaign finance reform.) The snow date is the following Sunday, Feb. 3. The Desmond-Fish Library is located at 472 Route 403 in Garrison.

Since we have all just experienced an election cycle with one of the highest price tags ever, I thought it would be helpful to discuss alternative approaches to financing campaigns. Last year, I polled my constituents about their feelings on public financing of campaigns. I was surprised that only about 50 percent were in favor of full or partial public financing. I feel there are great benefits to be realized with some form of public financing, and I think it would be helpful for everyone to learn more about how such models have worked effectively elsewhere.

Campaign financing plays a pivotal role in the choices voters have at the polls. Studies, including one recently released by Citizens Union of the City of New York, identify a higher percentage of contested elections in both primary and general elections when full or partial public financing is available to candidates and when contribution limits are strictly enforced.

Last September, I hosted Sean Eldridge, founder of Protect Our Democracy, on my local public access television show, Speak Out, to discuss how his organization is working towards changing New York state’s campaign finance laws. More recently, on Speak Out, I hosted Rachael Fauss, who authored the Citizens Union report entitled Fair Elections for New York State: How Public Matching Creates Greater Voter Choice and Competition (the full report is available on the Citizens Union homepage at citizensunion.org), and Ian Vandewalker from the Brennan Center to discuss the issue.

Now, I have asked some of these good government groups to join me on Saturday, Feb. 2, from 12:15 to 2:15 p.m. at Desmond-Fish Library, 472 Route 403 in Garrison (snow date: Sunday, Feb. 3), for a panel discussion. The panelists are Dick Dadey, executive director, Citizens Union of the City of New York; Jesse Laymon, downstate campaigns manager, Citizen Action of New York; and Susan Lerner, executive director, Common Cause/NY. Anyone interested may also come at 11 a.m. for a short town hall meeting on general issues in the state. I will be hosting more of these general meetings around my district next week and the following week. Call my office or visit my Assembly website for more information.

I encourage you to join my guests and me at the Desmond-Fish Library on Feb. 2 to discuss campaign finance reform. I am sure it will be an interesting conversation and that there will be ample statistics provided that will illustrate the benefits of changing the campaign finance system from what it is currently to something that creates greater equity, transparency and choice in elections and in government.