A few weeks back, my big sister called. She lives in Berkeley, Calif. We don’t talk often, but when we do, it spans whole phases of the day — we start out in broad daylight and by the time we hang up, it is well past dusk (Eastern Standard Time).

I was cooking when the phone rang, so I borrowed my son’s headphones. While Elisa updated me about her Ph.D. thesis, her advisor, her cats and her travels, I chopped. My chopping must have been noisy.

“What are you making?” she asked. 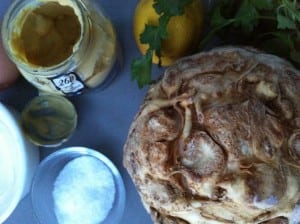 “Celery-root rémoulade,” I told her, and also that I was going to serve it with ham and raisin sauce, and maybe a watercress salad.

Elisa was quiet then, so I picked up the thread: “Anyway, so, after your paper was published … ?”

“Look,” she interrupted me, “I don’t want you to go to any trouble, but can you cook something memorable when I come visit? I like having something to think about all year.”

I laughed, flattered that she believes me capable of cooking food memorable enough to sustain a whole year of mental re-visitation, and, moreover, that I can do so without going to any trouble. “Like what?” I asked.

“Like whatever that is you’re making right now: celery rémoulade. That would be fine.”

So now she is here. And although I was hoping to think up a spectacularly memorable menu for her visit, I have not succeeded. Celery-root rémoulade it will be.

Some people describe it as French coleslaw, and while that certainly conveys the role it plays in a meal, it does not do justice to the experience of eating it. (And I say that as someone who loves a good coleslaw.) The flavors of celery-root rémoulade are complex and compelling, with the sharp bite of Dijon mustard calmed by silky mayonnaise mixed with bitter parsley (and sometimes crème fraiche for tang), and all of it offset by the deep, quiet earthiness of the celeriac. 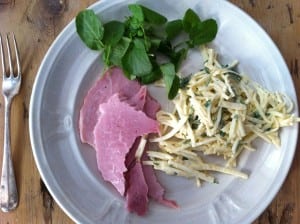 I was probably 20 the first time I tasted it, having requested a sample in a little gourmet takeout shop on Martha’s Vineyard. I was living on that island for the summer with a group of friends, in a sprawling, dangerous apartment — some of our light switches would shock you if you touched them; we thought this was funny and edgy rather than stupidly hazardous.

My friends Laura and Stephanie both had summer birthdays, so the three of us decided to celebrate with a beach picnic: a bottle of white wine and the most sophisticated nibbles we could afford on our waitress salaries. I might have blown my entire share on celery-root rémoulade after sampling the spoonful passed to me by the kid behind the counter; it seemed to answer some craving I hadn’t even known I possessed before then. But it wasn’t my birthday, so we opted for variety, including cake.

The beach was chilly. We wore thick wool sweaters and went barefoot, and we took pictures of ourselves in the cerulean light. I still have those photographs. We look like young women amazed at the sheer abundance of new things the world was handing over to us to taste for the first time … and also like we were just beginning to realize how thrilling and romantic and wretched it would feel to pass, again and again, from not knowing to knowing, each step through that portal an irreversible one.

I’ve never again had celery-root rémoulade as good as what we ate that summer. Nonetheless, I will serve the best version I can muster to my sister tonight, alongside duck confit and mâche salad. For, much as I’d like to whip up something neither of us has ever tasted before — to fill our senses with an entirely new gustatory experience — it is January, and I am not feeling brave. It will be enough to serve a good, simple meal that we can both think back on happily in the months to come.

Start this dish a few hours before serving it, since it needs time to marinate. The technique for steeping the celery root in salt and lemon to soften it first comes from Julia Child’s Mastering the Art of French Cooking. Homemade mayonnaise makes this dish amazing; the recipe that follows incorporates the mustard, vinegar, salt and pepper from this dish, so don’t duplicate those ingredients if you use it instead of store-bought.

juice of one lemon

*To make mayonnaise: Using a wire whisk, beat together 1 very fresh egg yolk (preferably from a farm you know) and the juice of 1 lemon until pale and thick. Pouring very slowly in a thin stream, drizzle in 1/3 cup mild vegetable oil, whisking vigorously all the while. When the oil is incorporated, repeat with 1/3 to ½ cup olive oil. Mix in 4 tablespoons Dijon mustard, and salt and pepper to taste. Return to recipe at step 3, substituting up to half crème fraiche for the mayonnaise you use to dress the celery root.