Funding to be used for last lap of seven-year project

Cold Spring has won a $6,000 matching grant from the Greenway to help complete its Local Waterfront Revitalization Program (LWRP), which it began work on in 2006. The money will be used strengthen the LWRP section on implementation with proposed changes in the Village Code and increase the focus on climate change and sea level rise.

Anne Impellizzeri, vice chair of the Special Board, spearheaded the effort to obtain the additional funds, which were approved by the Greenway Board at their meeting in Hyde Park on Friday, Jan. 25. Impellizzeri declared,  “We’re in the home stretch of this seven-year project. We want to finish this year and do it right, and this money allows us to do just that.”

The Village Board appointed an all-volunteer Special Board in 2006 to draft a Comprehensive Plan and a LWRP. The Greenway provided a $7,500 initial matching grant to launch the project, which carried the effort until cash began to flow in August 2010 from a $50,000 matching grant from the state. The village itself fronted some funding that year, which was subsequently reimbursed. 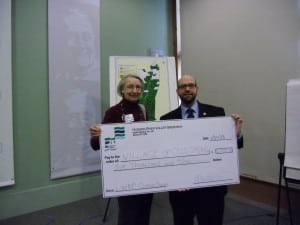 The Special Board completed its work on a Comprehensive Plan in December 2010, and the plan was then amended and adopted by the village in January 2012. The Special Board determined that its funding fell short of what was needed for a full LWRP, so opted, with the support of the state, to complete an interim study, called the Local Waterfront Revitalization Strategy (LWRS), in November of 2011. The Village Board and the state of New York accepted the strategy within just a few weeks. Later, $27,000 in additional state funding was granted to complete the full program.

The Special Board, which has worked with GreenPlan, a consulting firm, since December 2009, has been drafting the sections of the LWRP for more than a year, and hopes to finish the work by summer. Through a provision in the program called a Harbor Management Plan, the village will gain authority to the middle of the Hudson River. The LWRP will spell out 13 coastal policies and outline several projects, as well as the implementation steps the village intends to take, which will include proposed changes in the Village Code. Because the LWRP law originated with the Federal Coastal Management law of the 1970s, and must first pass muster by dozens of federal, state and county agencies, the village’s new LWRP will have standing at all levels of government.

The LWRP will give the village leverage in obtaining grant money for projects. A notable success in the Hudson Valley, Dobbs Ferry obtained $6 million in private donations and government grant funding for waterfront improvements after adopting its LWRP in 2006. Projects the Special Board has proposed include an Overlook Park on a portion of the Village Garage site, a RiverWalk, and basic improvements at Dockside, starting with shoreline stabilization.