Prohibition applies to those with gun permits, too

A week before the Newtown school massacre, the Town of Philipstown, with no fanfare and no apparent opposition, adopted a new policy banning guns from town buildings, parks and property. The rule, which prohibits even guns carried by those with permits, comes in a 7-page Town of Philipstown Workplace Anti-Violence Policy. It closely parallels the anti-violence policy earlier adopted by the Village of Cold Spring.

Overall, the policies for both town and village cover far more than guns and respond to a New York state law that demands they implement workplace-safety measures. Focusing on various forms of harassment and intimidation, both policies state the intent is to foster “a safe and secure work environment” to ensure fulfillment of the “mission of serving the public.” 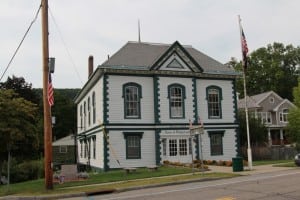 Each defines the workplace broadly, saying it encompasses town or village buildings; parks; parking lots; outdoor work sites, such as places of road construction, culvert maintenance, tree-trimming, snow-removal, and other highway-related projects; and town- or village-sponsored activities. Likewise, in both town and village the policy covers not only employees and appointed members of boards but vendors, contractors, consultants, members of the public, and visitors to municipal facilities as well.

Voting unanimously, Philipstown’s Town Board approved its workplace policy, the town’s first ever, on Dec. 6.

With no debate, Cold Spring’s Village Board voted 4 to 0 to adopt its policy on Sept. 7, 2010 (at a meeting dominated by heated arguments among residents over the fire siren).

They both declare that “no one within the town” (or village) “workplace, with the exception of police, shall have in their possession a firearm or other dangerous weapon, instrument, or material that can be used to inflict bodily harm on an individual or damage town” (or village) “property, without specific written authorization,” from the supervisor, in the case of the town, or the mayor, in the case of the village.

The two policies likewise state the prohibition applies, “regardless of whether the individual possesses a valid permit to carry the firearm or weapon. This restriction applies to firearms or weapons located in personal and commercial vehicles,” they both add.

The town policy further warns that “individuals who violate this policy may be removed from town property” and, if they are employees, “are subject to disciplinary and/or personal action up to and including termination … and/or referral to law enforcement authorities for criminal prosecution.”

Cold Spring’s version cautions that “threats, threatening behavior, or acts of violence against employees, visitors, guests, or other individuals by anyone on the property will be thoroughly investigated and appropriate action will be taken, including summoning criminal justice authorities when warranted.”

Philipstown adopted its policy almost two years after the Town Board sought — by formal law, not workday policy — to prohibit anyone from bringing a gun onto town government property. That effort began after a man at a January 2011 town meeting disparaged Town Board members and said that he was “packing,” apparently referring to a concealed handgun.

The Town Board quickly drafted legislation to deal with such situations. Subsequently, at a public hearing, a proposed gun-control law elicited both strong support and strong objections. Later, however, as gun-rights groups mounted vehement protests, the Town Board shelved the idea of an anti-gun provision — in that form, anyway.

Now, by defining all town-owned property as town workplaces, the Town Board is pursuing many of the same goals with efforts to keep guns out of Town Hall, the Philipstown Community/Recreation Center, other town-owned buildings, and the town’s parks and playing fields. Philipstown Supervisor Richard Shea on Feb. 13 confirmed that the new policy makes the same points as the 2011 draft law.

“We mean to have a policy that controls firearms in Town Hall and especially in Recreation, where we have children,” said Shea, a father, gun-owner and hunter. “We do not want people carrying guns in our Recreation Department. We don’t.”

“Or carrying guns in any of the buildings, other than police agencies,” Councilor Betty Budney commented.

“I just don’t want guns around kids,” Shea continued. Nor does the town government want anyone leaving a gun in a car at a town parking lot, including those at town parks and playing fields. “Why should you?” Shea asked. “There’s a thought that, if you’re going to be a gun owner, be a responsible gun owner. It’s a big responsibility. Exercise that responsibility.” He acknowledged the interest in carrying guns. “Just don’t do it here,” on town property, he said.

Cold Spring’s similar policy appears to ban guns from Village Hall and meetings there, the public dock, Mayor’s and McConville Parks, and such events as the July 4th Community Day celebration.

Nonetheless, how extensively such prohibitions can be enforced in either jurisdiction remains unclear.

Meanwhile, in a separate move, the town government has strengthened security at the Recreation Center, home to many children’s programs, installing cameras and using a locked door and buzz-in system. 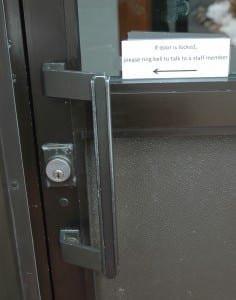 Message on the Community-Recreation Center door; photo by L.S. Armstrong

“They have started implementing the security system” for entry to the building, Councilor Dave Merandy announced at the Town Board’s Feb. 7 formal monthly meeting. He told his colleagues that installation of security cameras was underway, with two to four operating as of early February, of a total of 12 to be utilized.

Merandy described the new “buzz-in” front door practices. “Between 8:30 and 6, Monday to Friday, you do have to buzz-in.” He explained that the recreation staff members have monitors showing the door and can release the lock to allow entry. “People are not too happy, maybe, that they have to be buzzed in,” Merandy observed.

“I had to wait,” Councilor Nancy Montgomery, long involved in town recreation programs, told her colleagues.

Councilor John Van Tassel said that the day after the new system’s debut, an individual was turned away. “If you don’t have a reason to be there, you’re not going to be allowed in the building,” he said. Also, Van Tassel reported, the recreation staff has been collaborating with the Putnam County Sheriff’s Department for a program of background checks on recreation volunteers.

“It’s great to have the security up and running,” Shea said, praising those involved in getting everything in place. But he sounded rueful it’s even necessary. “That’s the world we live in,” he concluded.

7 thoughts on “Town and Village Ban Firearms From Civic Property”