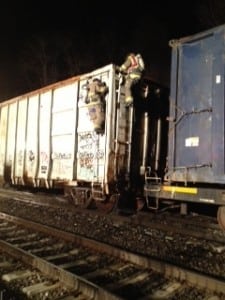 Cold Spring Fire Company (CSFC) responded to a rather unusual call early Saturday morning, Feb, 23. Fire Chief Matt Steltz told Philipstown.info that what originally came in as a report of trash burning next to the railroad tracks near the Cold Spring train platform actually turned out to be a train fire.

“The call came in about 12:45 (a.m.),” Steltz said. A box car loaded with trash, part of a freight train headed north to Albany, had caught fire. Steltz said that workers on the train later speculated that spontaneous combustion was the cause. He said that the engineer stopped the train just short of the Cold Spring platform — a move that made the firefighters’ job much easier.

“It was pretty convenient,” Steltz said, explaining that firefighters were able to put out the fire using a water cannon from a firetruck set up at the south end of the train station parking lot. He said the entire incident took only an hour to deal with.

Although not a common occurrence, Steltz said that CSFC firefighters have been called to put out fires on freight trains passing through Cold Spring in the past. It could have been much worse.  He said that about five cars up from the burning freight car was a tanker car marked “Petroleum.”

Because of the amount of water used to put out the fire, as much as 3,000 gallons, some residents may have experienced discolored drinking water after the fire and were advised to run their taps until the water cleared.