Four-act lineup performs this Saturday night at The Roundhouse

Riverfest, the free daylong music, food and crafts festival, has become one of Beacon’s signature and most popular public events, attracting an increasing number of crowds (more than 3,000 people attended last year) to its multiple stages each June. This year’s event, scheduled for June 29, will feature three stages and curated craft and food vendors. In order to keep it free and to keep it going, Riverfest’s organizers, Local 845, need to fundraise, and, in keeping with the spirit of things, what better way to do so than through music?

Enter Winterfest, a concert taking place this Saturday night (March 2) and the first to be held in the aptly named Waterfall Room (the falls are directly outside the huge, floor-to-ceiling windows) at The Roundhouse at Beacon Falls. With three headline acts and a fourth, homegrown “surprise,” the organizers are inviting attendees to “Come celebrate in communal warmth and brighten up the bleak, midwinter months … in anticipation of the sunny days ahead.”

Local 845’s Stephen Clair, Winterfest’s organizer, wanted to up the ante this year for this event, for which all proceeds will go directly towards Riverfest. “For our first three years we did something entirely different: pancake breakfasts, which were nice, grassroots, but a lot of work for not a lot of fundraising,” said Clair. “In our first year we had some concerts at the Howland Center, which were kind of a mishmash of local musicians. This time we wanted to do something more gussied up.” With that in mind, he approached Brendan McAlpine of The Roundhouse, who “very generously provided the exquisite space.” Winterfest will be a seated concert, with a bar open for drinks, some food served and “a classy set of artists performing.”

With the space secured, Clair booked bands he thought would work well with its “tremendous acoustics. Riverfest is about rock bands — it’s an outdoor festival. For Winterfest I booked more on the acoustic side of things,” he noted. 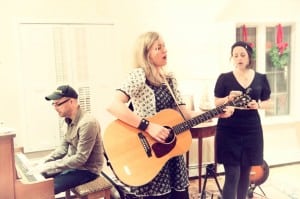 The Big Bright pulls together keyboardist Glenn Patscha and guitarist/vocalist Fiona McBain of the popular Americana roots-rock band Ollabelle, with singer/songwriter Liz Tormes. Big Bright will make their Hudson Valley debut (their overall debut was last September at Rockwood Music Hall in Manhattan) and, according to concert press notes, “pour beautiful harmonies and understated arrangements over a surprising selection of Brit-pop and vintage New Wave guilty pleasures in support of a new disc called I Slept Through the ’80s.”

Dubbing themselves “the new wake of New Wave,” the Big Bright was, according to the release: “formed around a shared guilty pleasure — vintage New Wave and ’80s Brit-pop (think Depeche Mode, Tears for Fears, The Cure) — The Big Bright finds the beating heart in the melodies, lyrics and frailties hidden in the overblown, overly familiar period arrangements of retro-pop favorites, translating them into smart, dreamy — and original — contemporary pop soundscapes.”

Clair added, “Their new project is understated — it’s taken from the ’80s, but subdued.” To learn more and listen to a few tracks visit thebigbright.com and soundcloud.com/thebigbright. 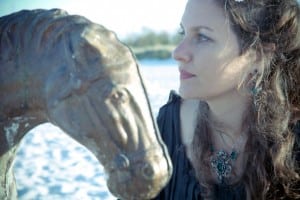 Also performing will be Antje Duvekot (pronounced aunt-yuh doo-va-kott), a Boston-based singer/songwriter with a classically sharp poetic sensibility. Duvekot is “the rare artist who can write about the social and the personal in the same breath,” said Boston’s folk icon Ellis Paul. “Her voice has a sound of innocence and naiveté which makes razor-sharp insights into the human condition.”

Producer Neil Dorfsman (Bob Dylan, Bruce Springsteen, Sting) added: “She creates an entire, detailed world in verse, and takes you there with beautiful and understated melody. Her songs are stunning paintings of color and shade.” And as Springsteen biographer Dave Marsh said, “Antje is the whole package.” 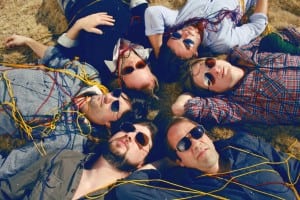 “Jammy, Americana alt-country rockers” Yarn will appear too, invited back after their 2010 Riverfest appearance because “people want to see them again,” said Clair. Press notes said Yarn “follows in the fine tradition of The Grateful Dead and Widespread Panic in working crowds into a mellow, communal frenzy.

Yarn’s sound owes as much to Gram Parsons and Earl Scruggs as to Jerry Garcia and Exile On Main Street-era Rolling Stones. Led by singer/songwriter Blake Christiana, their fourth and latest disc, Almost Home, produced by the multi-Grammy winning Bil VornDick (Alison Krauss, Ralph Stanley, Bob Dylan), comes close to capturing their blistering live shows and is certainly their most electric to date, but they are definitely best caught live.”

Yarn recently appeared at Austin’s famed South by Southwest (SXSW) festival in the New Frontier Showcase. Clair calls Yarn “a little louder, but sensitive to the room, and they will round out the night.” To listen and read more, visit yarnmusic.net.

The fourth and unadvertised act will be the Beacon Music Factory House Band. Consisting of many of the Factory’s disparate teacher-musicians, this band, whose members include a conservatory-trained violinist, a jazz trumpeter and a harmonica master, will, according to Clair, “debut their super eclectic and cool sound. We began, thinking of it initially, as an outreach effort and thought ‘if we put them in a room together it will be fantastic.’ Truthfully, it was a rough start at first, as they were coming from such different schools, but they have really learned how to work together.” They will bring their unique instrumentals to a handful of songs, including the standard “Lazy River.”

The doors will open at 7 p.m. The Roundhouse is located at 2 E. Main St. in Beacon. Tickets, which cost $45, may be purchased at the door or in advance by calling 845-202-3555 or on brownpapertickets.com. There are a few VIP tickets designated “Snow Angels” with front-and-center seating, and these cost $90.