Mike Bowman, candidate for Cold Spring Village Trustee, is no stranger to either village issues or running for elected office. A regular at village meetings in recent years and an elected officer and president of the Cold Spring Fire Co. for the past five years, Bowman sees himself as well prepared for the responsibilities of trustee, which do seem to be mounting and appear for some a bit daunting. 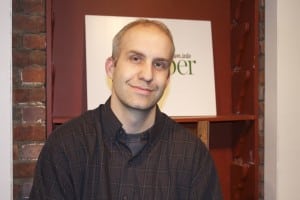 A lifelong resident of Philipstown, including Cold Spring, Bowman is in a three-way race for two trustee seats. He plans on emphasizing three separate but related concerns as he campaigns among his fellow villagers.

Bowman stresses first the need for greater openness and transparency in the operations of the village government. He concedes some progress has been made in recent years, but not enough in his view. “The state law [on government meetings] has to be the standard, he said. “No editing of the posted agenda right before the meeting,” is one of his complaints.

A frequent critic of outgoing Mayor Seth Gallagher’s meeting procedures, Bowman stressed his clashes weren’t personal but rather were about openness. For instance, on the controversy over a raise for Gallagher, Bowman said, “It wasn’t the money; it was the way it was handled.” Bowman also wants to see a more restrictive use of executive sessions by the trustees.

His second main issue is the need for better and more consistent follow-up on ideas regarding village initiatives. The perennial issue of parking is one example he offered. “Parking is an untapped resource for revenue,” he said. Bowman suggested a meter system, which could be turned on for the weekend visitor traffic but turned off during the week, should be explored. He also would like to see the village traffic code updated and more aggressive and even-handed enforcement initiated. “Some people park on the village streets for days at a time; we need to do something about that,” he said.

Garbage cycling also fits under this category for Bowman. “Do we honestly know where the money goes under this program? It shouldn’t take much to study it and understand it better.”

The Village Code needs to be updated, using the adopted Comprehensive Plan as a guide and source for change, according to Bowman. He had high praise for current Comprehensive Plan Special Board Chair Mike Armstrong and the other members, as well as people who served in years past. “The Comprehensive Plan is a great guideline for the future. We need the zoning code updated so the law reflects the plan,” he said.

Third on his list of categories is what Bowman considers “a breakdown of the planning process.” He said he wants to review the way the village handles applications for projects and how and when the village board interacts with the planning board as well as other boards. He also would like to review the timelines needed for various boards to act and have better communication between and among the boards.

Related to this issue, Bowman would like to see a leveling of the powers between the mayor and the other trustees and “more input and communication among the trustees.” He said he thought the mayor’s position had taken on too much of the agenda-setting and that “the trustees have to step up” and take on more of the responsibility for addressing issues and making decisions based on five people voting.

On the specific issue of the Butterfield development, Bowman said he was “very cognizant of people’s misgivings” regarding the presence of government services at the site. “Unless Paul Guillaro [the developer] gets government to commit and lays that [answer] out, people have a right to misgivings,” he said. Bowman said he was not in favor of the proposed zoning change for this reason and instead agreed with others who think a return to the planned unit development approach is a better course.

Bowman expressed admiration for Guillaro and confidence the matter could be resolved. “He asked for the moon originally, but he came down to earth” after people had input, argues Bowman.

On other matters, Bowman expressed a willingness to be open to big changes. He said he would discuss consolidation of services within both the town and village organizations. “We have a lot of duplication, the courts, the various inspectors; look at the police.”

As to whether the village needs a full-time appointed manager to better organize planning and drive projects, Bowman said he could see the potential. “I would be reluctant to put another salary in the budget, but maybe the trustees could then serve on a volunteer basis,” he said.