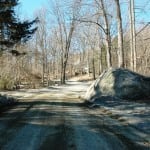 An 11th-hour pullout by the contractor intended to pave the 450-foot terminus of the historic Old Albany Post Road delays but does not kill the long-awaited project, Philipstown Supervisor Richard Shea said early Thursday afternoon (March 7).

“The deal with the contractor is off,” he said. “The project will happen. It will take a little longer.” The work involves a short piece of Old Albany Post Road from the intersection of Sprout Brook Road, a paved highway, to Upland Drive, a dirt lane.

The Town Board agenda for its formal monthly meeting Thursday night included a vote on awarding the contract for the work. Instead, some 48 hours before the vote, the low-bid contractor, Bilotta Construction Corp., of Rye, quietly rescinded its $366,250 bid, withdrawing from the project. Its departure forces the town government to re-advertise the project, await new bids, review them, select a new contractor, and then vote on awarding the work, Shea said. He said he hoped that new bid specifications could be prepared and advertised in about two weeks, setting the process in motion anew.

“The contractor withdrew, which is kind of a mystery,” Shea told Philipstown.info. He said Bilotta lost interest in the project after an hour-long phone conversation with Terry Zaleski, the new president of the Old Road Society, a group of dirt road aficionados. The Old Road Society signed onto a 2011 Memorandum of Agreement [MOA] that details how the repair work should be done.

Zaleski confirmed on Thursday afternoon that he had called Bilotta, after Old Road Society members had determined that the bid specifications “have nothing that references the memorandum” and its many provisions on how to carry out the work. “The bid [documentation] that went out was faulty because it did not comply with the MOA,” Zaleski asserted. “Whoever did the specs for the town did it wrong” and “wasted everybody’s time. The town deserves better. I’m sure they didn’t want it to come out this way and neither do we.”

He said concern increased when he spoke to Bilotta and learned that, to the contracting firm, “this was just going to be a standard paving job,” with no unique considerations. In fact, Zaleski said, “this is a special road,” recognized nationally for its centuries-old historical significance.

In 1982, the 6.6-mile stretch of Old Albany Post Road from Sprout Brook Road to Route 9 was added to the National Register of Historic Places, which found it “has retained a significant amount of its 18th-century character and appearance” and called it “the least altered extant section” of the whole 150 miles from New York City to Albany.

Zaleski said the Old Road Society continues to back the paving of the 450-foot section but that it must be done properly. “What is really concerning us here is not the project,” he said. “The society has not changed its position” on the merits of paving the section. “However, we expect, as does the town, full compliance with the terms of the MOA. The town is looking to this as a test, and so are we.”

The memorandum of agreement assigns the Old Road Society to check on the work to ensure everything proceeds satisfactorily. The agreement’s stipulations on the work demand the removal of as few trees as possible, replacement of any vegetation removed, limiting the amount of rock cut from a large boulder by the roadside, retaining a stone wall, and meeting other detailed requirements.

The 450-foot paving project has been anticipated for more than five years. Flood damage to the end of the Old Albany Post Road in April 2007 storms led to a federal declaration of a disaster and plans to repair and prevent further devastation to the southernmost section. The Town of Philipstown requested and obtained the assistance of the Federal Emergency Management Agency (FEMA) for the endeavor. But FEMA subsequently realized that its fixes would have an adverse impact.

Public debate followed and the Old Road Society brought in an expert from Penn State University for advice, in October 2008. Subsequent discussions between the town government, FEMA, Old Road Society, New York state agencies, and the Advisory Council on Historic Preservation led to the June 2011 MOA. According to the memorandum, the project seeks “to provide hazard mitigation to protect the road from future damage, to protect the public, and to preserve the character-defining features of the road.”

On its website, the Old Road Society notes that through the several-year consultation process, “the Old Road Society Board of Directors came to believe that drainage and a hard surface is required to prevent severe erosion of this particular road section. The memorandum of agreement gives significant protections and provides a role for the society in monitoring construction activities.” 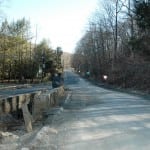 Tim Ziegler, the consultant hired by the Old Road Society in late 2008, concluded that “surface stabilization with urban-style storm sewers, interconnected with catch basins, is the logical option for the 450-foot section of unpaved road up-slope of the Sprout Brook Road intersection.” Ziegler explained that “surface stabilization” commonly means paving, although “other stabilization methods can be used to harden the wearing course of an unpaved road in order to resist erosion.”

In latter February, FEMA issued an official public notice inviting comments on the project. By noon on Tuesday (March 5), the agency had received three messages, including one from the Old Road Society, said Walter Dobison, senior emergency management program specialist in FEMA’s Region II Recovery Division. Dobison informed Philipstown.info that after the period for comments closed on Wednesday (March 6) “we’ll wait a few days” to see if any more comments arrive by slow mail, before FEMA reviews all the comments “as quickly as we can.” The three messages received as of Tuesday included both support and opposition to the paving, Dobison said. He added that copies of all the comments would be provided to the town government and to the Old Road Society.

Zaleski said Thursday afternoon that over the March 2-3 weekend his group had written a letter to the Town Board, after learning of the impending vote. “This is not something that was last-minute,” he said of the society’s concerns.

But while Old Road Society members drafted their letter, some of their Old Albany Post Road neighbors rallied support for the project. Shea said that on Tuesday he had received a petition from 69 residents, mostly living on or near the 450-foot stretch, strongly backing the paving. “There are quite a few people down there who would like to see this,” the supervisor said.

Shea expressed frustrations with the holdups. Nonetheless, “I think it will all work out for the better” with the issuance of new bid specifications, he said, acknowledging that the first time around, “possibly the bid documents were lacking.” At the same time, he pointed out, the requirements appear on plans the bidders would have reviewed, even if they were not on related written documents.

When the Town Board sought bids, it received 10, ranging from Bilotta’s $366,250 bid to one from Con-Tech Construction Corp., in Yorktown Heights, for $1,231,449. Shea said Wednesday night at a Town Board workshop that he feared Bilotta’s withdrawal could jack up the price of the work on the next go-round and jeopardize FEMA funding.

Both Wednesday night and Thursday afternoon he wondered why Zaleski contacted the contractor directly instead of going through town officials. “Questions should be funneled through the town,” he said.

On Thursday Shea refuted notions that the town government wants to renege on the 2011 pact. “Why would we work for five years to come to this agreement and then jeopardize it? We intend to fully adhere to the MOA. It would just run counter to everything” to not do so. “If you don’t follow it, you don’t get paid” by FEMA, he said. Overall, the setback on the paving project “is kind of discouraging,” he added. “If it gets derailed, I’ll see that as grossly unfair and a real undermining of the democratic process.”

The supervisor said he suspects some dirt-road advocates are confusing the 450-foot paving project with town interest in paving a few other particularly troublesome dirt-road sections, including another, separate piece of Old Albany Post Road. His announcement in November that the town hopes to move ahead with some of that other work (as well as with the 450-foot paving) prompted an outcry. 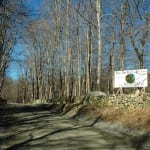 “No one was talking about large-scale paving of dirt roads,” he said. Moreover, he emphasized, the Sprout Brook Road-Upland Lane project “is completely separate and distinct from any other road” work on Old Albany Post Road or any other dirt road.

But objections continue, expressed in one form on two large signs posted along Old Albany Post Road. “Save Our Historic Dirt Roads! Say No to Paving!” the first proclaims. “Say Yes to Dirt!” the second urges.

As the 2011 memorandum of agreement states, the Old Albany Post Road evolved from a Native American trail in the Dutch and British colonial era in the 1600s and 1700s to become the main land route between New York City and Albany, used for transporting mail as well as travelers and goods.

A narrow dirt ribbon, pitching up and down hills and around curves, the 6.6-mile National Register length now contains houses, including large modern structures, as well as stone walls and farm fields, and sees school buses, pickup trucks and SUVs, in place of ox carts and carriages.

The National Register declared that the road “has been maintained in its original route and 18th-century dimensions” while a roadside sign near the Old Albany Post-Sprout Brook intersection offers another reminder of history, marking the site of a circa-1840 Continental Village schoolhouse.