Forum format brings out some nuance in positions

The three candidates for Cold Spring trustee took one last opportunity Wednesday night (March 14) to make the case for themselves in advance of the village election on Tuesday, March 19. In a forum hosted by Philipstown.info/The Paper and moderated by Publisher Gordon Stewart in the music room at Haldane School, incumbent Bruce Campbell and challengers Michael Bowman and Stephanie Hawkins engaged in largely informal discussion of the issues confronting the village they all profess to love dearly. Two seats on the Board of Trustees are open. 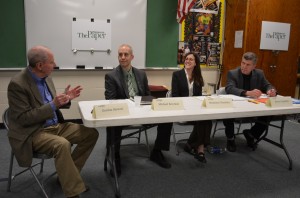 From their opening statements onward, the candidates worked to put their best feet forward without attempting to compare themselves directly or argue much with either of their opponents.

Bowman and Campbell underlined their born-and-raised-in-the-village pedigrees as well as their long records of service in various capacities. Hawkins referred to her broad and deep volunteerism as well a relative newcomer’s enthusiasm for having landed in the right place to live.

“I have always worked in organizations that served the village,” said Campbell, who took pains to list a variety of steadfast involvements, including two separate terms as a trustee and a Haldane School Board stint.

“I believe I have skills and personal attributes that can benefit the village,” said Hawkins. She emphasized her 20-year book industry experience negotiating agreements as excellent preparation for a collaborative approach to reach consensus on the board.

Bowman, after expressing affection for working with local people, recalled his father’s business ownership on Main Street as a foundation on which he had built his years of service to the village. Highlighting his presidency of and service in the Cold Spring Fire Co. 1, Bowman said, “Being manager of the fire company with the motley group of men — and women [he hastened to add] — I have acquired a special skill set.” 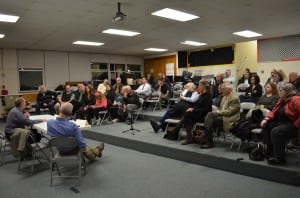 The audience listens to mayoral candidate Ralph Falloon at the March 13 forum. Photo by Jeanne Tao

Coaxed along by Stewart’s friendly inquiries, the candidates mostly agreed on the broad strokes of policy considerations and approaches to governing with varying degrees of emphasis and viewpoint. Bowman for example stressed the need for reform of board procedures to have “more transparency and open government.” He has been a vociferous critic on this point. Campbell agreed but defended the board’s actions during his last two terms as deputy mayor to outgoing Mayor Seth Gallagher. The Village Board has worked hard to be transparent,” he said.

On the related issue of meeting conduct, Hawkins said she wanted to see citizens who showed up for meetings treated with greater respect and consideration. “If people bother to show up, they should be welcomed. They shouldn’t feel as if it’s not their Village Board meeting,” she said.

All three candidates were anxious to demonstrate a willingness to get the Butterfield property snafu back on track, but they did not suggest any bold new initiatives or stake out a perspective that marked a sharp difference from each other.

Bowman was the most supportive of developer Paul Guillaro’s situation and the need to cooperate with him. “A plan of action is needed. I believe he wants to work with the village to work out a plan,” he said. But Bowman also said he recognized that some assurances for the public were needed as well. He said he believed that a ban on formula businesses and some agreement by Guillaro on the types of commercial businesses he would permit on the site would definitely help.

Hawkins didn’t disagree but placed more emphasis on the developers’ willingness to provide a detailed site plan early on in a new process as a way of getting buy-in by the board and the public. “He did do it once and then he withdrew it,” she reminded the audience of approximately 50 people.

Campbell, despite the recent year of starts and stops, nevertheless expressed optimism that a new effort by the village attorney and the lawyer for Guillaro to arrive at a timeline and other agreements for the approval process might yield positive results. 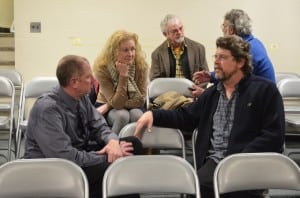 Mayoral candidate Ralph Falloon speaks with members of the audience after the March 13 candidates forum.
Photo by Jeanne Tao

Bowman and Hawkins both agreed that a more aggressive posture was needed to get the county to commit to senior citizens’ services as past of the Butterfield project. “I think we should be able to get a memorandum of agreement from them. We have to go over there (Carmel) and ask for it,” he suggested.

Hawkins was even more assertive on the subject. “In November the county executive did say at a public hearing that she was committed to bringing services here, but she had not yet put it on the agenda,” she said.

Some senior citizen supporters of Bowman have tried through the PCNR to position Hawkins as an opponent of their advocacy for a senior center, although with little actual evidence for their case. While not referring to the attacks, Hawkins said: “I would like to have senior citizen political energy focused on Carmel. The county legislators need to give an ear to our concerns over here.” And then a little later she added, “The county should put its money where its mouth is.”

Taken together, Bowman and Hawkins seemed prepared to organize a caravan of protest and head it to Carmel.

All three demurred on committing to a new firehouse, however desirable, given a number of other capital projects that have priority.

In closing, Bowman said, “We need people to lead who understand not only the history of the village but the reality of where the village is now.” He urged a village commitment to creating a community center for young people and a nutrition center for seniors, regardless of whether the county provided it.

“My focus is not just on which projects are before us but also on long-term planning. Change is afoot. We have to prepare for the future and see what we want the village to look like. I am suited for the work,” said Hawkins.

“I just want to continue the work I’ve done on plenty of projects,” said Campbell, as he proceeded to list several, including the Main Street water-pipe relining, repairs to the village dams as well as the pump stations near the river.

Closing this part of the forum, Stewart, who has had a career as a governmental adviser said: “I have never lost a profound sense of the difference between advising and running office. The people willing to get out there and ask for votes have my respect and gratitude.”

In the second, looser part of the forum, Stewart parried with Ralph Falloon, the sole candidate for mayor, over his agenda once in office and the use of mayoral influence to move things.

Falloon said one of his main goals was “to get to consensus (with other trustees) on how to do business.” He said he wasn’t interested in fighting to get things done and thought it important to tell the appointive boards “what we feel needs to be done.” He said further that there is an “incredible wealth of knowledge in the village. I will not be doing this job alone. I’ve always gotten help from both sides of the line.”

Falloon jokingly said that his position as a husband and a father has trained him well in the art of both compromise and asserting authority when needed.

In answer to an audience question, Falloon acknowledged his job as a Stamford, Conn., firefighter would keep him out of the village 48 hours a week but that he expected the other trustees to step up to any problems that might arise in his absence.