It turned warm enough last week for shorts and tank tops, and the grocery stores were brimming with springtime specialties: strawberries from Florida and asparagus from Mexico. But if you are wondering what’s in season right here, right now, you will have better luck looking out your own window. There, you might spy little tufts of onion grass that have hastily shot up around your yard to soak in whatever sunlight they can before it’s all confiscated by the ravenous, soon-to-be-unfurling leaves and grasses.

Those slender tubes may not look delicious to you (indeed, they may look like nothing more than obdurate weeds) but they are edible — something I discovered as a kid when my best friend, Janet, and I spent warm afternoons pretending to be orphans in the wilderness, setting up house in our shrubbery and surviving on whatever we could forage from my backyard. 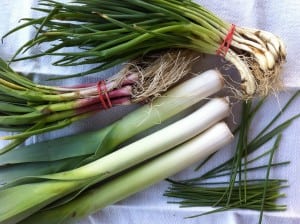 Even if you aren’t required by tragic make-believe circumstances to rely on your weedy lawn for sustenance, you can still look to it for ideas. And the big idea at the moment is alliums.

“Allium” is the Latin name for the botanical family that includes onions, garlic, chives, leeks, shallots, scallions and the like. Some members of this tribe, like wild ramps, appear only in springtime. Others are available year-round — and, when properly cured, become hardy enough to survive winter — but they and their offshoots are an especially tender delicacy at this time of year, with an herbal sweetness and gentle, complex bite. Instead of using them as a base note in recipes, you can pile them on, cooked or raw, in salads, soups, tarts and side dishes.

I learned to love them long before I had a yard for them to disfigure. In fact, my affection for them is exactly as old as my habit of looking out my window for dinner ideas. For several years before we moved up here, we lived in a loft overlooking Union Square, so the greenmarket was right outside our door, exactly where a front yard would be. Yes, pigeons and drug addicts were part of the view, but one learns to look selectively — and before long, I could see when my favorite vendors arrived with something new.

I spent a lot of time at the greenmarket in those days and came to the conclusion that April was its most confusing month. The suddenly warm weather summoned New Yorkers from their garrets, shops and offices. They’d flock to Union Square hoping to find pretty, bright tokens of the season, edible accessories to arrange in their raffia tote bags: things like strawberries, peas, daffodils, radishes, lilacs, morels and asparagus. Instead they’d find last year’s sad apples, potatoes with the eyes excised, wintered-over brassica and monstrous carrots and parsnips that seemed to gaze back at them with a look that said, “You think you had a tough winter? Try spending it in a root cellar.” 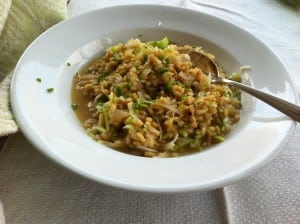 No matter how ardently the shoppers insisted that it was warm enough for strawberries and peas — Just look at my strappy sandals! — the laconic farmers were not swayed. Their fields had been frozen just three weeks earlier.

For a spring allium, three weeks is plenty of time to run riot, and farmers have learned to capitalize on this fervor. These days, any Union Square shopper willing to fill her bag with bouquets of young garlic and baby shallots can bring home a bonanza.

That’s what I did a few days ago, carrying an armload with me onto the train and placing it on the overhead rack. For the next hour, my jostling alliums sent little wafts of oniony scent throughout the car. Their fragrance may not have been as sweet as lilacs’ or daffodils’, but to me, they smelled of reckless green enthusiasm — exactly the way early April is supposed to.

These days, any dish made by cooking grains in broth with herbs and vegetables is called a “risotto.” When I was younger, we called such things “pilafs.” You can call this version what you like, and you can make it with farro (a wonderful, nutty cousin of wheat), hulled barley or Arborio rice.

2 generous handfuls mixed spring alliums, such as baby shallots, ramps and green garlic (you should have about 1½ cups total when minced)

2 cups farro (or other grain)