Has Route 9 suddenly become more aromatic — in a good sort of way? The cars headed north making a sharp left at Vera’s Philipstown market seem to be heeding some kind of olfactory lure as they, and their counterparts heading south along that same stretch, turn in to the very new Cold Spring Coffee Pantry (CSCP), which now occupies what used to be Vera’s “left-hand side” of the premises. Soon after the opening, declaratory Facebook posts were appearing, saying, “This is the real thing!” in the tones of those who never expected such a caffeinated miracle to appear in this neck of the woods. 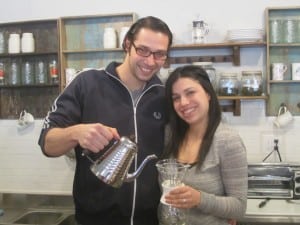 All this has been greeted with equal excitement by Sam Lutzer and her husband Andy, the establishment’s owners. Sam, mere minutes into a recent conversation, spelled out their relationship clearly: “Ever since he met me, he knew I wanted to have a coffee shop. I love coffee.” Careers as a lawyer (Sam) and a corporate real-estate analyst (Andy) notwithstanding, the pair almost serendipitously co-owned a coffee shop in Bedford-Stuyvesant, Brooklyn, before heading up north.

“I was at a charity event, and I met someone there who was opening a coffee shop, and he asked if I could do the lease,” Sam explained. “I ended up going into business with him; he has a solid business plan and he had done his research well in terms of having the population to support his product.” Then living on the Lower East Side of Manhattan, the Lutzers collaborated in different ways, with Sam “being on the pulse of craft specialty products” and Andy, having just graduated from business school and beginning that career, “providing a shuttle service: Home Depot runs, heavy lifting, pastry tasting,” that sort of thing.

The couple got married in Garrison in 2010, spending the better part of a year before the wedding in Philipstown. Feeling that need for more space and sensing that this area was “a magical place for us,” they relocated here, selling their former business to their partner. Feeling a bit like empty-nesters, they pined for another coffee shop to call their own and decided to take the French-press plunge again.

Knowing that “to be sustainable, location is everything,” they began scouting last October for that optimal spot, where they could reach commuters. Feeling that “it’s not always realistic to go into the village,” they focused on Route 9, off which they live, seeing a number of spaces that “didn’t exactly fit our needs,” said Sam. One day they spotted a “commercial space available” sign at Vera’s. “It was perfect timing,” noted Andy. 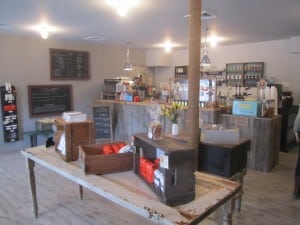 Both agreed that Vera, Dominic and Joanne Giordano have “just embraced us. They have been so accommodating, just micromanaging every stage to avoid hiccups — we couldn’t have done it without them.” Reciprocity is truly at work: customers have asked whether they can purchase the famous “Vera’s donuts” and bring them next door to consume along with a CSCP coffee (there is counter seating at the window), and the answer is “of course.”

But the beans are the meat of this story. Sam described the CSCP as follows: “We’re offering a specialty coffee program, rotating the coffees in our tap, using Irving Farm, out of Millerton, in our espresso and our coffee hoppers. On Saturday, we have ‘Tap Takeover’ where we take Irving Farm out and put three others in. We play around with the settings on the grinders in order to ultimately deliver what everybody in the chain has tried to achieve. We ‘dial in’ four times a day — it depends on the temperature and how old the beans are. Not everybody wants a black coffee, so dialing in gives us other ways to suit tastes as well. It is a ‘single origin’ program. Over the next few weeks we will have different roasters.”

The store they ran in Brooklyn used one roaster exclusively, and Sam said they had a lot of roasters try to convince them to do the same here, but they have resisted, as this way they can control the flavors more effectively. “Every roaster has a different perspective,” she said, “and you lose the ability to make it your own.”

On a typical day they will have a selection of three or more single origins from which to choose, usually entailing about a three-minute wait, plus a house blend ready-to-go, which has been brewed in a French press. They have a full range of lattes, macchiatos, cortados, café au lait, etc., and, after hearing requests from some Australians living locally, they can make a “flat white” if asked to, described as a “shorter shot with a velvety foam — it tastes more like an espresso drink than a milk drink,” according to Sam.

In addition to the selection of coffees (and the sale of the beans, whole and ground), they sell a range of Harney teas, hot chocolate and “cold brews” — which Sam is quick to mention do not consist of “dumping coffee or tea over ice,” but rather “creating a concentrate, over 18 to 24 hours, which we then use ice to dilute.” To go with the coffee they feature Five Acre Farms milk, Bread Alone pastries and cookies, along with “grab-and-go” items such as granola bags and yogurt, and, coming soon, organic oatmeal. 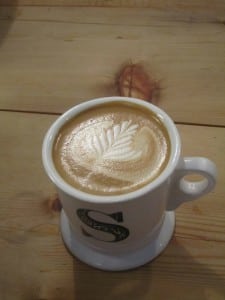 “It’s a very different market here from Brooklyn,” said Andy.  “Everyone here is a little less uptight. There’s less hustle and bustle, but there’s the same expectation of quality. They’re so excited that we’re here.”

“We knew the interest was here,” said Sam. “Even though we took a leap of faith, we knew that The Hop had opened, Newburgh Brewing, and hearing people gush over craft beer, we knew.” She also praised her staff, noting, “Other places don’t invest enough in really good people. We want our team to be happy; they are all tapped into the culinary world. Getting people trained in specialty coffee is intensive and it’s hard work, so there has to be a true love of it in order to do it.”

The CSPC is located at 3091 Route 9. They are open Mondays through Fridays from 6:30 a.m.; closing hours vary from 6 to 7 p.m. There will be outdoor seating in the warmer months, with live outdoor music planned for Sundays in July and August. Call 845-265-2840 or visit coldspringcoffeepantry.com or their Facebook page for more details.