Wants meeting with Village Board on Butterfield zoning

Cold Spring’s Planning Board Wednesday, May 8, endorsed draft legislation to ban fast-food chain outlets, drive-in windows and other “formula businesses” from the village.

On a separate code matter, Planning Board members called for a joint meeting with the Cold Spring Village Board of Trustees to discuss various issues regarding the proposed Butterfield redevelopment, including the choice of “lead agency.”

Since the debut last year of plans to turn the Elmesco gas station-garage into a Dunkin’ Donuts drive-through, the village has pondered the implications of having standardized fast-food venues, drive-thrus and other chain stores, which typically share a name, architecture, employee uniform, food or merchandise line, or similar characteristics with others throughout the nation or world. With no law in place, the Dunkin’ Donuts got approved last December. But the debate continues. 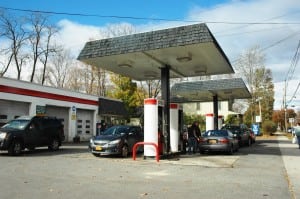 Plans to convert the Elmesco car service garage into a Dunkin’ Donuts led to concerns about formula businesses in Cold Spring. Photo by L.S. Armstrong

In February, the Comprehensive Plan Special Board released a report citing concerns that formula businesses would “not only detract from the character of surrounding historic properties and newly built properties within the historic district, but will detract from the unique, historic character of the entire village, the vitality of existing commercial areas, and the quality of life of Cold Spring residents,” threatening pedestrians with hazardous car traffic, generating trash and creating pollution. The same month, Village Attorney Stephen Gaba unveiled a draft law banning such enterprises. [See “Doing the Butterfield Dance,” March 1, 2013]

Village officials asked the Planning Board to comment by May 24 on the latest text of the draft law, released April 9, which like its predecessor prohibits formula businesses from “all districts.” A separate proposed law provides definitions and exempts from compliance grocery stores and any enterprise that begins as a unique entity and grows to spawn a chain.

“This is fairly important” and is “going to be a complex thing,” Jimmy Zuehl, acting Planning Board chairman, told colleagues Arne Saari, Dick Weissbrod and Barney Molloy. (The board remains short a member, pending transfer of Donald MacDonald from the Zoning Board of Appeals.) They then discussed whether the village should ban formula businesses from village neighborhoods beyond the historic Main Street business corridor.

“It would be a terrible degradation to Paulding and Chestnut if we didn’t do it,” Weissbrod said. “Fast-food would really make us like Anywhere, USA, as opposed to something special. If we can clamp down on it, why not?” A small commercial strip containing stores as well as the Elmesco Dunkin’ Donuts location lies along Chestnut Street, between blocks of historic homes. The proposed Butterfield redevelopment site is partly bounded by Paulding Avenue, which also contains historic homes.

“I’d hate to see a McDonald’s down on the waterfront,” Saari added. However, he expressed reservations about legal challenges to a ban. “I think the village is involved in far too many lawsuits,” Saari said. “I’m all for eliminating formula businesses and restaurants,” if it can be done without prompting litigation. “If we can be successful and put it village-wide, great.”

Weissbrod said that cases from other municipalities, outlined by Gaba in a 2012 study, demonstrate that if done properly for reasons involving the public good, formula business bans can withstand legal challenges.

Unlike some small towns, which can relegate formula businesses to a designated sector, “we just don’t have the physical space to do the lineation,” Molloy observed.

Ultimately, the board backed the draft legislation, with a few recommendations on internal document consistency to be forwarded to the Village Board by Zuehl.

The Planning Board subsequently took up the latest draft B4A zoning text, disseminated by the Village Board earlier that day, and the idea of the Village Board being “lead agency,” or main local government body overseeing the review process. The Village Board was lead agency on an earlier incarnation of the Butterfield design, which would have required a different kind of zoning change.

“If you guys want it, more power to you. Go ahead and take it,” said Trustee Chuck Hustis, attending the meeting at Zuehl’s invitation.

Molloy wondered whether the Planning Board would want lead agency status and “own” the rezoning – and all the attendant responsibility.

When additional questions arose, the Planning Board decided to seek a joint meeting with the Village Board. “Let’s have everyone in the room,” Zuehl suggested. “For a project this big, we need to work together.”

To better accommodate members, the Planning Board moved its regular meeting date from the first Tuesday to the second Wednesday of the month, with the next meeting scheduled for June 12.