The Philipstown Planning Board last Thursday, May 16, approved the newest proposed incarnation of the old Guinan’s pub, agreeing to a change in plans to create an upscale small inn and restaurant.

Last year, the board approved conversion of the onetime watering hole into a restaurant, with apartments upstairs, but the developers behind that proposal withdrew in February. The building, an old house, stands at No. 7 Garrison’s Landing, above the Hudson River.

In other business Thursday, the Planning Board called for a public hearing in June on the application by the Open Space Conservancy Inc., an affiliate of the Open Space Institute Inc., to subdivide land it owns bordering the town Recreation Center at Glenclyffe, anticipating eventual construction of two homes. The board met at a new venue, the Butterfield Library, for the first time.

Glennon Watson of Badey & Watson Surveying and Engineering P.C., representing the owner of the former Guinan’s, said it would become a seven-room “high-end exclusive hotel” and restaurant. Garrison Station Plaza Inc. owns the building and will lease it to Project No. 7 Inc., which will open the inn and restaurant-cum-wine bar, according to documents given the Planning Board. 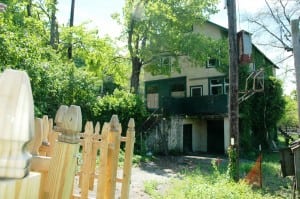 “There’s no physical change to the site from what was previously approved,” the Planning Board’s consulting engineer, Ron Gainer, said before the vote.

According to a revised statement of use, the restaurant will have 39 seats, including those at the bar, with an area for sales of morning coffee, pastries, newspapers and sundry items to commuters using the Garrison train station.

“Essentially, the restaurant will stay the same” as previously outlined, except the number of seats will drop from 47 to 39, “to accommodate the parking required for the hotel,” Watson told the Planning Board. He also said that the inn proprietors, expecting many guests to arrive by train, want to run a shuttle to take them to such locations as Boscobel, Cold Spring and Beacon.

Kevin Donohue, Philipstown code enforcement officer, said Monday that chef Pascal Graff of Le Bouchon and The Garrison Café is involved with the restaurant planning. Efforts to reach Graff were not immediately successful.

After Guinan’s closed in 2008, there were various suggestions for using the building, including transforming it into offices — something that generated public consternation.

“I think this is what the public wanted, more than anything else,” Planning Board Member Kim Conner said Thursday of the latest restaurant plan.

The board also discussed the application by Open Space Conservancy for a “minor subdivision” on its land near the town recreation center. Papers filed with the board state that Open Space intends the eventual construction of two single-family homes.

Several years ago, Open Space gave 22 acres at Glenclyffe to the town government, which bases the Philipstown Recreation Department there.

Town Board Member Dave Merandy, attending in his role as a Town Board liaison, said Recreation Department staff had wondered about the implications of the subdivision on their programs. “Their only concern was the rear of the property. They have no setback now, so that was a concern,” he said.

Planning Board members asked about the Hamilton Fish mansion, home to a family prominent on both the Philipstown and national scenes in the 19th century, and to access to the trail that Gen. Benedict Arnold fled down to gain British protection during the American Revolution, after the discovery of his betrayal of the American cause.

Representing Open Space, Watson said that the group has a contract with the Garrison Institute and “they have no immediate plans right now” for the mansion. “They’re going to mothball the house with the hopes of eventually being able to restore it. But they don’t know if that’s possible,” he said. “I’ve been told it’s in terrible shape and there’s some question about whether it can be restored. The actual Fish mansion is encapsulated within the building” now standing, which “has been jerry-rigged and re-divided inside,” he explained, citing its role over the decades as a high school and religious headquarters.

Watson also reassured the board about Arnold’s trail. “Nothing that would happen would really affect it,” he said.

Planning Board Member Neal Zuckerman urged protection and recognition of the trail, whose significance, he said, has long been underappreciated. Zuckerman called the Arnold story “one of the most fundamental parts of American history. There’s something unique and historical about this site. I think it would be a wonderful thing, as part of this transaction, to find a way to better recognize it, beyond the one sign we have on Route 9D” marking the trail.

Watson promised to raise the issue with his clients.

Susan Jainchill, the board’s consulting planner, questioned whether creation of two residential lots could lead to later construction of a conservation subdivision containing a number of homes. Open Space’s land is zoned as Institutional Conservation and Rural Conservation land.

Even if subdivided, “it’s still a 20-acre zone,” Watson said.

The board voted unanimously to conduct a public hearing on the Open Space application at its next formal meeting — June 20, if the board meets, as usual, on the third Thursday of the month.

One thought on “Planning Board Approves Restaurant, Upscale Inn for Guinan’s”