When I was 14, I found myself one hot July day on top of a mountain with seven other campers and two counselors from my sleep-away camp. We were in Vermont, not far from where I am now (though the camp I attended no longer exists), and we had spent two days hiking rough miles and sleeping on bare, rooty ground before arriving at the aforementioned peak.

We were tough girls, getting tougher.

Yet as we sat there taking in the broad, earth-rolling view and tending to our blisters, all we could think about was ice cream.

Someone mentioned it — “I wish I had some ice cream right now” — and our minds, like a flock of pigeons, all turned in unison to the thought.

Oh. Wow. Ice cream. Could anything have been better? We spent the next half-hour discussing flavors. A few years earlier, a place called Steve’s Ice Cream had opened in Somerville, Mass., and to this day I still remember the amazement and longing I felt as a friend described how, at your request, the staff would mix anything — M&Ms, Heath-bar crumbles, brownie bits, fresh raspberries, anything — into your scoop. This was a radical idea back then; ice cream had flavor (chocolate, strawberry, rainbow), not chunks and swirls of baked goods and candies. Not personality.

We were, at the same time, painfully aware that, of all the foods unlikely to appear in the wilderness on a July afternoon, ice cream was probably the unlikeliest. How would it get to us without melting? By refrigerated helicopter, yes, sure, but none of us knew someone with both a helicopter and a large stash of ice cream — and even less, someone willing to deploy them for our benefit.

So we sat there, collectively dreaming about ice cream.

Some decades later, when I was pregnant — indeed, all three times I was pregnant — I became fixated on the idea of blue cheese and port, both forbidden to a person in my condition. It wasn’t just the injunction against them that made them appealing, however. After all, sushi, steak tartare, raw eggs and hard liquor were similarly off-limits, yet I didn’t pine for them at all.

What I longed for was not just a single glass and a hunk of Fourme d’Ambert anyway, but one of those long, irresponsible evenings that never quite gel into something as purposeful as dinner — when after a while you don’t even care because the company, the drinks and the bacteriologically sketchy cheeses are all so fine.

I have been thinking about cravings lately because, here at the camp where I cook, I have become fixated on anchovies. Strictly speaking, anchovies are not impossible, like ice cream on a mountaintop, nor forbidden, like moldy cheese for a pregnant woman. But when you are cooking for 90 people, six of whom are vegans and one of whom has a fish allergy, you cannot sneak anchovies into a dish without announcing it. And the moment you do that, your dish is over. Dead. Rejected. Might as well go straight into the trash. 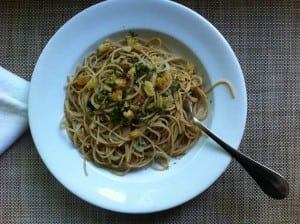 At home, I sneak anchovies into all kinds of things, including pesto (which it transforms miraculously). I don’t have to worry, because, luckily, my kids have no food allergies, and this allows me to play around with ingredients that might be rejected if the kids knew about them.

Not that I make a habit of tricking my kids. I want them to be open-minded about food, not just well-nourished, and that means informing them what they are eating. Fortunately, by now the boys trust my cooking (though Dosi adamantly refuses to), so much so that, a few weeks ago, when I made a dish of whole-wheat pasta tossed with a sauce of anchovies, onions, dill and bread crumbs, they were curious to try it and deemed it “really good.”

It is really good. And, at the moment, it’s all I can think of.

This recipe is adapted from Gourmet magazine. A few years ago, when that wonderful publication still existed, a friend tore out the page with this recipe on it and thrust it upon me. I still have the page, now battered and oil-stained.