Small firm headed by Juhee Lee-Hartford and James Hartford beats the odds, emerging successfully from a field of 14

In a tale right out of a Frank Capra movie, in defiance of any bookmaker’s odds, Cold Spring’s River Architects has been designated the prime consultant of a $6 million public/private partnership to design and construct a 16,000-square-foot complex in a downtown park located in the city of Stamford, Conn.

Scheduled to open in November, 2015, the complex will consist of a large outdoor skating rink situated in a park-like setting with interactive fountains surrounding the rink’s perimeter and a park facility building nearby. Funded partially by a large gift from Steven and Alexandra Cohen, the donation will be used to pay for both construction and long-term maintenance. Part of the gift will go toward establishing a fund to subsidize the costs of admissions, lessons and skate rentals for disadvantaged children.

The decision by the judges to award River Architects the contract was a unanimous one, despite the competition afforded by 13 other firms, most of them much larger and more well-known in the architectural field, including some “giants in the industry” according to Juhee Lee-Hartford, one of the two principals — the other being her husband James Hartford — in the firm. They were told they won the vote based on the strength of their team, the illustration of their creativity and as a result of their in-person interview.

“Why don’t you take a run with it?”  That simple question, by James to Juhee, initiated the whole journey, which began with an email from Mill River Collaborative, the private sector of the partnership, which was familiar with their portfolio from other dealings. The email, sent to many firms, invited them to make a proposal for the project. As a public project, it was also publicized in a public notice. 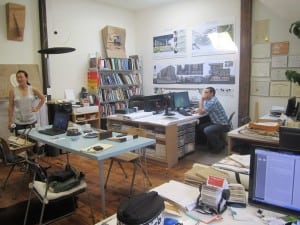 The interior of River Architects’ busy office; Juhee Lee-Hartford at left.   Photo by A. Rooney

Lee-Hartford’s first reaction, knowing some of the firms potentially in the running, was “We have no chance — there are too many big shots.”  But, in reality more comfortable with large-scale, multi-million-dollar projects (from previous work with large architectural practices in New York City) than with the small-scale work that River Architects has been concentrating on in recent years, she felt emboldened to at least give it a try.

Lee-Hartford first reached out to her former boss, Hugh Hardy, now semi-retired, to see if he was interested in working together, but his partner didn’t think that two architectural firms in one team made sense. She then reached out to Arup Engineers, a very well-known group in their field, and with that important collaboration in place, “built a strong team and got shortlisted.” That strong team includes 12 consultants, including those who specialize in ice rinks, fountain design, code, structural engineering, mechanical engineering, and landscape design.

The proposal included an overall conceptualization of the project in terms of design and approach, as well as details on the project team, relevant past projects and references. One of 14 submissions, their proposal was shortlisted, along with four others, and all were asked to prepare and expand on the design idea for an interview.

“We pulled together amazing renderings, and had a huge charrette [collaborative session in which a group of designers drafts a solution to a design problem] brainstorming ideas and strategies on the presentation of those ideas, for two weeks,” says Lee-Hartford, giving special credit to two firm members, Joe Jaludi and Anthony Barrale, as well as to Arup Engineers, whom she calls hugely supportive. “They gave us strategies on how to prepare for the interview; creativity was key. We were the last team to be interviewed — by about 12 client representatives doing the judging. Out of five, we won all the judges’ unanimous votes,” Lee-Hartford says with obvious pride, continuing “at that time, the economy was still at its low end and so there were some very big firms going for it.”

Initial design concept rendering for the fountain and the park building.   Image courtesy of River Architects

All of this means a great deal of change at River Architects, as this project will take up a great deal of their time over the next two and one-half years. They have about ten months of further drawing and design documentation to start with before the general contractor is selected and  construction actually begins.

“It will be very intense for the year until construction,” says Lee-Hartford, “and then it will turn into a different kind of time consuming activities: reviewing shop drawings, answering questions from the contractor, reacting to site conditions, etc. Coordinating 12 consultants is a workout, but they are always feeding me rich technical information. We will have to perform and maintain intensity for the whole period.”

River Architects’ staff has expanded by 250 percent, and of course such growth means expenses have risen and space within the office premises on Marion Avenue is at a premium. Still, these are the kinds of challenges most small businesses are eager to take on. In the end the whole experience has been very positive thus far, notes Lee-Hartford, “We’ve been lucky all along, having found the right consultants and the right staff. The bottom line is, we poured our heart into it and gave it everything we had.” Visit riverarchitects.com for more information.