The Putnam History Museum will present the 2013 Israel Putnam Trailblazer Award and Historic Families of Philipstown Award at its annual gala on the evening of Sept. 22, at Highlands Country Club in Garrison.

The Trailblazer Award is named for Israel Putnam, major general in the American Revolution, for whom Putnam County is named. The Gordon Family, honored with the 2013 Historic Family of Philipstown Award, was profiled in the September 13 edition of The Paper.

The 2013 recipient of the Israel Putnam Trailblazer Award is the Honorable Loretta A. Preska. Judge Preska, a Garrison resident, is Chief Judge of the United States District Court for the Southern District of New York, which includes Putnam County. When she began service on the federal bench 20 years ago, she was a pioneer in a field dominated by male colleagues. 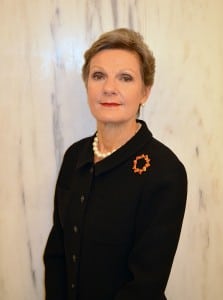 Born in Albany, Preska attended the College of Saint Rose in that city, earning her Bachelor of Arts degree with a major in chemistry. She credits a well-timed piece of advice from a professor for her decision to pursue law rather than scientific research as her career path. In a talk she gave at Fordham University earlier this year, Preska recalled that the professor simply told her, “You should work with people.”

A skilled public speaker, she attended Fordham Law School and received her Juris Doctor in 1973. While in law school, she clerked in the Albany County District Attorney’s office. Judge Preska went on to receive her LL.M. in trade regulation from New York University Law School in 1978. She worked as an attorney in private practice in New York City from 1973 until 1992, first with Cahill Gordon & Reindel and later with Hertzog, Calamari & Gleason.

There was clearly a need for trailblazers as Judge Preska began her career in law. In 1981, women made up only slightly more than 7 percent of the judges in federal appellate and district courts according to a March 2013 article on news.uscourts.gov.

Since Sandra Day O’Connor became the first female justice on the U.S. Supreme Court approximately three decades ago, the percentage of women serving as full-time judges on federal district courts and courts of appeals has more than quadrupled. Women now make up 235, or just over 30 percent of the 772 full-time judges in the U.S. District Court and Courts of Appeals. Judge Preska has helped bring that transformation about. “When I go to meetings of chief district judges today, there are a lot more women,” she told The Paper.

Asked what advice she might give young women entering law today, Judge Preska said, “We’re not going back to the way it used to be. There are fewer jobs. Lawyers have to consider non-traditional jobs – but they can do so in entrepreneurial ways.”

In 1992, on the recommendation of U.S. Senator Al D’Amato, President George H.W. Bush nominated her to a seat on the U.S. District Court for the Southern District of New York. She was confirmed unanimously. Judge Preska has served as Chief Judge since June 2009.

She has been vocal regarding what she sees as one of the court’s biggest issues these days – the federal budget sequestration. In August of this year, she co-authored a letter to Congress along with Chief Judge Gerald Rosen of the Eastern District of Michigan. The letter was also signed by 85 other chief judges. “Funding reductions have forced us to slash our operations to the bone and we believe that our constitutional duties, public safety and the quality of the justice system will be profoundly compromised by any further cuts,” Judge Preska wrote.

As with any judge, Judge Preska undoubtedly has her critics. But The Robing Room, a website that provides lawyers with a forum for evaluating federal district court judges and magistrate-judges, illustrates the high regard that Preska enjoys within the legal community – as evidenced by comments submitted to the site:

“No other assigned judge in that venue has taken the time or made the effort to resolve cases like Judge Preska. She was fair to all and straight forward.”

“Excellent judge, very even-tempered, smart, responsive, and fair. A credit to the bench.”

“I recently sat on a jury for a case over which Judge Preska presided. As a first-time juror, there were lots of things that I found interesting, but what I will most remember about this experience was the patience and fairness of the judge. She is a class act.”

She has received numerous awards throughout her distinguished career including: the 1992 Louis J. Lefkowitz Public Service Alumni Award from Fordham University School of Law; the 1998 Fordham Law Alumni Association Medal of Achievement; a 1998 Doctorate of Humane Letters, honoris causa, from the College of Saint Rose; the 2001 Edward J. Weinfeld Award from the New York County Lawyers’ Association Federal Courts Committee for Excellence in the Administration of Justice; the 2004 Charles Carroll Award from the Guild of Catholic Lawyers; the 2009 Stanley H. Fuld Award for outstanding contributions to the development of commercial law and jurisprudence in New York State from the Commercial and Federal Litigation Section of the New York State Bar Association; the 2011 President’s Special Award from the New York Women’s Bar Association and the 2012 Barbara Jordan Outstanding Public Service Award from Phi Alpha Delta Law Fraternity International.

Judge Preska has also served on the Advisory Board of the New York Chapter of the Federalist Society and, from 2001-2009, on the New York Regional Panel for the Selection of White House Fellows. She is a trustee of Fordham University and has served several terms as a vice president of the Fordham Law Alumni Association.

The Paper asked Preska what she hopes people might have to say about her tenure as a judge when she eventually decides to retire. “I would hope they would say that we improved ‘customer service’ in the courts,” she said, adding,  “and that we did the best we could in taking care of our people – our employees. With the cuts they are seriously having to do more with less.”

Preska is married to Thomas J. Kavaler, with whom she attended law school. Kavaler served as the editor-in-chief of the Fordham Law Review, and currently works in private practice.