The Malcolm Gordon School, part of a proud legacy

Each year, the Putnam History Museum (PHM) honors a local family as part of its Historic Families of Philipstown Award series, established in 2009. The 2013 award will be presented to the Gordon Family of Garrison, at the PHM gala on Sept. 22, at The Garrison.

There can be little argument over the historic significance of the family being honored this year – or the importance of the property which they would come to call their home – and much more. The building, now home to The Hastings Center, served as the Malcolm Gordon School in Garrison and was built in 1854 by New York banker William Moore. 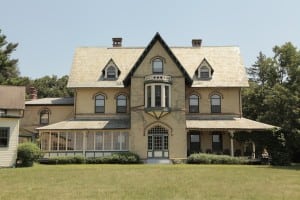 The Malcolm Gordon School, located off of Route 9D in Garrison, closed in 1990 and is now home to The Hastings Center. (Photo by Nic Taylor)

It was designed by renowned architect Richard Upjohn who also designed The Grove in Cold Spring. Moore had married well. Very well. His wife was Margaret Philipse Gouverneur, part of the family for whom Philipstown is named. In 1697 the Philipse family was awarded a tract of land by England’s King William III that was so huge it is hard to fathom by today’s standards. It included most of present day Westchester, Putnam and Dutchess Counties. The Moore summer home was known as Woodlawn, long before the arrival of the Gordons.

Various caretakers of what had been the Moores’ estate came and went throughout the 19th and early 20th centuries. It seems not all of them held it in high regard. According to a Hastings Center publication outlining the history of the property, one occupant turned the building into a rooming house, complete with sheep that occupied the first floor.

The Malcolm Gordon School is established

That changed with the arrival of the Gordon family in 1927. Malcolm K. Gordon had enjoyed a 27-year career as an educator at St. Paul’s School in Concord, N.H., where he also excelled as an athletic coach.  He and his wife, Amy, came to Garrison intent on establishing a boys’ boarding school. The school would go on to enjoy a three-generation, 65-year run, with Malcolm Gordon serving as its first head master. 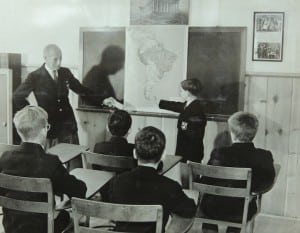 When he retired in 1952, his son, David Gordon, took over in that capacity, supported by his wife Nanetta. In turn, David C. Gordon, who will accept the award on behalf of his family on Sept. 22, became the third head master in 1973. His wife Maggie, who now works at Stonecrop Gardens, also taught at the school. David and Maggie still live on what was once the grounds of the school, in a remodeled home that originally served as a stable and then a cottage for workers at the school.

In an interview with The Paper, David C. Gordon said that the school had a rather humble beginning in 1927 with just three students, although that number swelled to nine by the end of the year.  From that point on, the boarding school, housed 30 students each year. As a pre-preparatory school it offered grades fifth through eighth. A boys-only school, its students wore a crested blue blazer and grey flannel pants on a daily basis.

The Queen Mary and The Scribbler

Gordon said that in his grandfather’s time, a Model T Ford known affectionately as the Queen Mary was “the workhorse” of school life. Later it was replaced by a Model A which was dubbed the Queen Elizabeth. Gordon still owns that vehicle today. 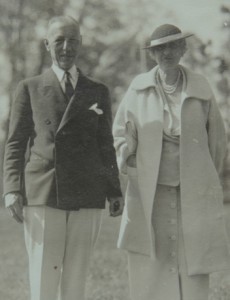 Some 700 students attended the school over the years, and it has its share of noteworthy alumni, among them George Andrews, whose father Roy Chapman Andrews was the real-life character upon whom the fictional Indiana Jones was based. Others included Robert E. Lee IV, Avery Rockefeller, George Washington Young – from the family of the first American president, Pierre Matisse, grandson of the artist Henri Matisse and Sam Adams, a descendant of the Revolutionary War political leader, brewer and one of America’s founding fathers.

The latter Adams ended up working for the Central Intelligence Agency in Vietnam, during the war there. Donald Irwin, who established the Gordon School’s newspaper, The Scribbler, went on to become a White House Correspondent, working for the New York Tribune and later the Los Angeles Times.

The pros and cons of a very small school

Today at Haldane School in Cold Spring, debates about the pros and cons of a school district with only 900 students from K through 12 are common. Looking back to his days at the Gordon School, Gordon feels that the school’s smallness “had its pros and cons” but he seems to lean toward the positive. “As a boarding school, we had them 24-7,” he said. And it wasn’t just in the classroom. “Here, we had them in study hall, even at the dinner table.” And around the clock learning wasn’t just about academics. “There were all kinds of opportunities to teach manners, how to get along with each other.” The curriculum was varied – from Latin to wood working shop. 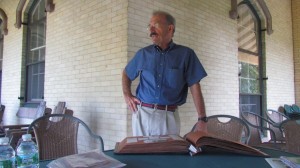 Sports were an important part of school tradition throughout its history. The Malcolm Gordon School did not play other institutions however; competition was strictly intramural, with students divided into two teams – The Hudsons and The Highlanders. “If you were a Hudson,” Gordon said, “it was for life.” Sports included hockey, a Malcolm Gordon favorite, football, soccer, baseball, basketball – and riflery.

Under the gym, which today serves as the Hastings Center library, there was a 50-foot rifle range. In the early 1930s, William Ruthven Smith, superintendent of the United States Military Academy from 1928 to 1932, invited the students of the Gordon School for a skate at the West Point hockey rink. It became an annual tradition that endured along with the school.

The end of an era, community involvement continues

Nothing stays the same, and the market crash of 1987 marked the beginning of the end for the school. There was a sharp drop in admission interviews. Enrollment declined. “With a school of 30 students there’s not much room to maneuver,” Gordon said. And with a proportionately small alumni base, an endowment could only be modest at best. “It wasn’t Harvard,” Gordon said. The school closed in 1990. Today, The Hastings Center offers education of a different sort, addressing fundamental ethical issues and bioethical research related to health, medicine and the environment.

The Gordon School was far from the only mark the family made on local life. In the 1930s a group of parishioners from St. Philip’s Episcopal Church in Garrison became concerned about the mining operation near what is now Little Stony Point Park, just outside Cold Spring. Malcolm Gordon was among them and they met at the school to discuss what could be done about the quarry operation’s destructive impact on the landscape.

That group planted a seed that would grow to become The Hudson River Conservation Society, which in turn evolved to become Scenic Hudson. The Gordons were also instrumental in helping to improve the ball field across from the Garrison School, the site of many a well-attended baseball game in bygone years with teams from the Garrison Fire Company taking on other communities from along the Hudson River.

David C. Gordon’s mother, Nan, was a long-time member of the Putnam County Historical Society and Gordon has continued that family tradition of community involvement, serving on the Board of Directors for the Constitution Island Association and the Forest Committee at Garrison Union Free School. He has also served on the Vestry at St. Philip’s Church.

Tickets to the Putnam History Museum gala are available online.

Click here for a profile of The Honorable Loretta A. Preska, who will be presented with the museum’s 2013 Israel Putnam Trailblazer Award as part of the gala.