The seven-month-old Matteawan Gallery, like many in its peer group, is not a large space. Its proprietor, Karlyn Benson, utilizes it best by showing small works. “Works on paper are manageable,” she says. Intrigued by wood block prints, and seeing their affordability as a plus for the community, she decided to mount an exhibit of them. She turned to a former colleague at the Museum of Modern Art, Jeff White (he still works there, in the print department), for ideas and assistance. 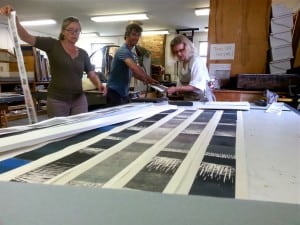 White ran with the idea and turned it into a collaboration between a group of 13 artists, the Garrison Art Center’s printmaking studio and Matteawan, where the show, titled UV Portfolio and centered on the loose point of departure theme “nature abstracted,” opens on Second Saturday, Nov. 9 (reception from 6 to 9 p.m.) and runs through Dec. 22. One of the intriguing aspects of this project is that most of the artists involved are not print makers — in fact they had little experience in the medium.

The title UV Portfolio stands for unique variants, and the initials “UV” are often seen penciled on prints that are unique variations from the same initial matrix. The block used for each print offers the same starting point, but no two prints are alike due to constant shifts in color, incremental cutting or “reducing” the block and a shifting balance of intention and chance in the printmaking process. White, under his company name of totemic17, is a Sleepy Hollow-based publisher and facilitator of limited edition woodcuts, inspired by “the medium’s unique aptitude for both bold contrast and seductive nuance.”

Conceptual by nature, totemic17 specializes in producing theme-based portfolios consisting of works of different, set sizes. A previous project, 17tugs, had artists carving woodblocks and making prints related to tugboats, adapting images to a mural in Tarrytown. For this project, White and Benson were most interested in, as Benson puts it: “Experimentation. We wanted the artists to feel free and know that they wouldn’t be judged.”  White adds, “We wanted to come at this with the openness to fail, not having expectations and enjoying the process.”

Invited artists were chosen specifically by White and Benson, who were seeking artists whose work was basically abstract, and which elicited a curiosity in the curators as to what it would come to be in another medium. Geographically the artists span New York City, Philipstown, Beacon and beyond and “Pretty much everyone we asked wanted to do it,” White said. Each artist was given three opportunities to come to the Garrison Art Center print making studio and work, alongside, but not together with, three other artists, for seven-hour stretches. 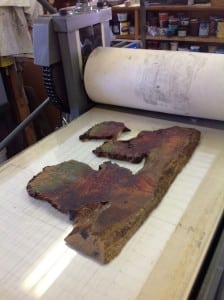 Matt Kinney planed and inked tree remnants such as this on the GAC press bed.

As noted in a show press release: “For artists who are used to working alone in their studios, this experience offered a new sense of cooperation and experimentation. Part classroom and lab, the print shop was a place where artists were free to try anything, ask for advice, and share materials. The resulting prints are records of this communal experience, as well as evidence of each artist’s creativity and originality.” Benson said, “Everyone was doing their own thing, but bouncing ideas off each other.”

Artists were able to choose between two each of a variety of sizes, which then naturally influenced the work. In the studio they were provided with assistance and some training from White, who says that although he is not a master printer his role was to help facilitate the work, done through the preparation of papers and mixing of colors.

Painter Jen Bradford, of Beacon enjoyed the experience. “Like many of the participants,” she said, “I hadn’t printed in many years (I work almost exclusively in oils), so it was great to share the printmaking studio with accomplished artists who felt a bit like beginners. Many of us spend many hours alone in our studios, so it made a nice change to talk about art and life, troubleshoot and learn from one another as our work progressed. Everyone brought a willingness to experiment and make something happen within the few sessions we had, and were grateful to Jeff White for his enthusiasm and help with technical questions (and musical selections).”

White and Benson enjoyed watching the artists at work. White recalled the first day: “With [painter] Susan English, to see her working with a kind of recklessness was great. Ryan Magyar works in oil paints, with a squeegee, which couldn’t be more different than woodcut, but his work is based on nature and he found a way to adapt to the medium in a way that’s really beautiful.” 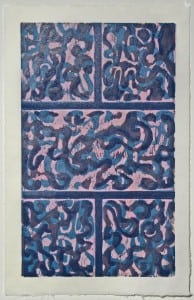 Another artist, Christopher Albert, who normally works with oil and acrylic paint, creating collages and small assemblages, had this to say about the project: “I’m honored … to work alongside of these other artists whom I respect. The project, as crafted by Jeff and Karlyn, has offered up a great platform for experimentation and discovery. I appreciate that the process of producing the prints, in the communal studio experience we shared as artists, is embedded in the resulting prints and, although that collective experience may or may not have obvious impact on the resulting prints, those prints stand as record of that shared moment and that’s a significant aspect of this whole thing, for me. I think the impact of a project like this isn’t just seated in the immediate resulting works, but also in how it feeds the artist in the long run. This has been an exhilarating exercise in tweaking my making process. I also feel that by supporting and exhibiting this kind of effort, Matteawan Gallery distinguishes itself as not just a space that exhibits and sells art, but as a true instigator and incubator of higher level creative impulses which gives nourishment to artists, and by extension, the art viewing public.”

Both Benson and White have nothing but praise for the Garrison Art Center. “They were an integral part of this project. Finding this space was a dream,” says White. “To have the availability of this studio — it’s underutilized — and to have everyone so welcoming and helpful, even the smell of it is wonderful. All the artists have fallen in love with this space.” Barbara Smith Gioia, who manages the print studio, agrees that it is underutilized and calls it “private, another world, and a project like this is wonderful because it brings artists who don’t have experience with print making a new dimension to their work; I applaud Jeff’s idea.”

The other participating artists are Joseph Ayers, Karlos Carcamo, Lorrie Fredette, Thomas Huber, Leslie Kerby, Matt Kinney, Kimberly Loewe, Ryan Magyar, Kathy Moss, and Jeff White. Benson is planning to rotate the dozens of works over the course of the run, so that everyone will have a chance to have their work shown, and the public can stop by at different times and see unique works.

Matteawan Gallery, which specializes in contemporary art by emerging and mid-career artists, is located at 464 Main St., Beacon. Visit matteawan.com or phone 845-440-7901.