Leveraging a demographic advantage, a strong organizational core and a message of incumbent accomplishment, the Philipstown Democrats won the race for town supervisor and the other two seats open on the Town Board. All five board positions are held by Democrats. 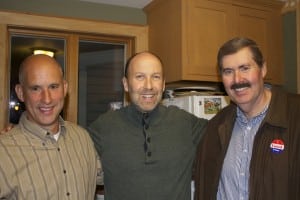 Running unopposed for his third term as supervisor, Richard Shea led the way for incumbent John Van Tassel and first-time candidate Michael Leonard. Shea received 1,751 votes according to the unofficial total by the Putnam County Board of Elections. Van Tassel had 1,585 and Leonard 1,382.

Republican/Conservative candidate Lee Erickson, who had argued during the campaign that the board needed to include a non-Democratic voice, trailed with 1,127 votes. Erickson lost two years ago when he challenged Shea for the supervisor’s job.

Running only on the Conservative line, Cathy Sapeta, a first-time candidate, received 657 votes.

“We always keep it positive, we run on our own merits, we have a proven track record,” declared Shea as he thanked an enthusiastic audience of campaign workers in a private home in Nelsonville. Shea emphasized community building as a central tenet of his team’s agenda going forward.

“There are so many people that have to be there to make it happen,” a grateful Leonard told the group. “I will do the best job I possibly can,” he promised.

“It’s truly an honor to have served you for the last four years and I must have done something right because I am getting the shot again,” said Van Tassel. While thanking campaign workers Van Tassel also paid tribute to Betty Budney, a long-serving board member who did not run for reelection.

At the Depot Restaurant in Cold Spring about three-quarters of a mile down Main Street, the Republicans acknowledged their defeat and vowed to maintain a strong presence in the town to counter the Democratic bloc.

Erickson termed the run “a good try. Two years from now we’ll be back again. We’ve got to press on. We’ve got to stay vigilant. I won’t stand for that complacency that allows fresh perspectives to vanish,” he said. He added that he would run again “if the opportunity presents itself” and overall “will be back, making sure people hear my voice loud and strong.”

He again expressed concern about issues raised in his campaign: the lack of an adequate senior citizen center, the subdivision of land by the non-profit Open Space Conservancy around the town recreation center, and some choices in town spending – “I don’t want to see tax dollars wasted on dirt roads [washing out] every time it rains.”

Philipstown Republican Party Chairman Mike LaRocco said he was “obviously disappointed” at Erickson’s loss, believing he “would have made a huge difference on the town council [board].” He thanked the party faithful, telling them “we ran a really solid race and I think we brought a lot of issues to the forefront. The Republican Party in this town is revitalizing itself.”

Here are the complete, unofficial election results from Putnam County Board of Elections:

See an explanation of each proposal here.

SIX: Increasing Age Until Which Certain State Judges Can Serve

One thought on “Dems Take Three Town Board Seats”