Just before he put the last piece of falafel in his mouth, my husband, Peter, turned to me and said, “Did you photograph this?”

“But it’s so beautiful.” He indicated the lone remaining golden patty that he’d set back down on his plate. It was nestled on a piece of torn pita, topped with bright green herb sauce and a drizzle of stone-white tahini sauce, both of which I’d also made. Shredded lettuce surrounded it. It was a pretty little composition, I had to admit. 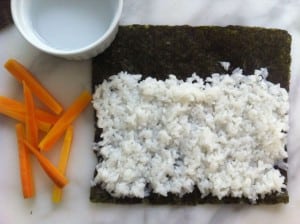 The kids jumped in. “You really should write about this, Mom.”

“Really? Thank you,” I replied distractedly. “I guess it is. I just…”

Just didn’t think of it, is the truth. Or half-thought of it but didn’t register the idea because I was just playing around, trying out something I’d been meaning to try for a few months. Besides, I had been intending to write this week’s column about something I’ll be making for the GUFS School Forest Day fundraiser next weekend. (You are invited; look for notices and come!) Its woodland-themed menu has been occupying my thoughts for many days.

But honestly, by now I should know better. I have lost count of the number of times Peter has said to me, mid-meal, “Did you write this recipe down?” To which I inevitably reply: No. Usually because whatever made the dish good was something I did on the fly, tasting and adjusting, considering options and tasting again. It was serendipity. Once it’s over, I’m loathe to try to go back and capture it on paper. And anyway, sometimes I just want to cook and not feel like I’m a character in a story about cooking.

We all know the saying: Life is what happens to you while you’re busy making other plans. (It’s often attributed to John Lennon, but actually predates him.) Well I think there ought to be a variation on it just for writers. Because, inevitably, stories are what happen to us when we are in pursuit of other stories. And I sometimes think: I must be thick-headed not to notice the one occurring right now, right here, right in front of my face. 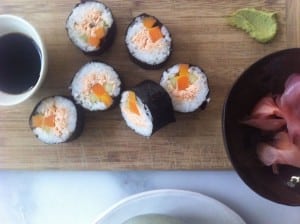 But maybe it’s best not to notice. Because who wants to go through every waking minute on the lookout for material? That would be like walking through a national park with a camera glued to your eye (not that some people don’t do that). You might get great pictures, but you forfeit the experience.

Last night, while trying to decide whether I really need to make two desserts for the fundraiser or if I can get away with one, I made sushi rolls for supper. I had boiled the rice ahead of time, blanched the carrots, and grilled a piece of salmon, so it didn’t take long. The kids asked for samples of the first roll – I was happy to oblige – and then the second and the third, so that before long we’d eaten our entire supper like that, standing at the counter, dripping soy sauce everywhere, taking turns rolling up the nori and spreading out the sticky rice, all very pell-mell. It was fun and easier than I’d thought, and quite delicious, too.

And this time I was ready to step back, just for a moment. Before the last roll was devoured, I pulled out my camera, removed myself from the fray, and photographed it. Because Peter has a point: I really should photograph everything, because I never know what’s going to wind up in a story.

I grilled the salmon for these rolls because my kids prefer it that way. But sushi-grade tuna can be found at the farmer’s market, and used raw. The pickled ginger is from Foodtown in Cold Spring. I found the rice, wasabi powder, vinegar, and nori at Nature’s Pantry in Fishkill.

¼ to 1 teaspoon siracha, or to taste

Everything up to this point can be done 1 to 3 hours ahead of time.

One thought on “Mouths to Feed: Eating in the Moment”