Hundreds of people filled the pews and the side aisles of Our Lady of Loretto Catholic Church in Cold Spring Friday morning (Dec. 6) to offer prayer and tribute to a favorite son of Philipstown, Jim Lovell, during a funeral Mass of Christian Burial.  A large number of attendees also filled a downstairs church hall and watched a camera feed of the ceremony. Some people had to just stand outside in the December mist. 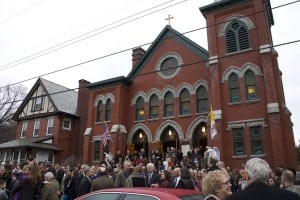 The day and night before many of the same people and still more lined Parrott Street in Cold Spring for hours to wait to pay their respects to Jim Lovell’s family at the Clinton Funeral Home. The visitation originally scheduled for two sessions of 2 to 4 p.m. and 7 to 9 p.m. became an eight-hour marathon with family members greeting people outside on the line as 10 p.m. approached.

Several Cold Spring natives said they could not recall a similar occurrence of such extraordinary communal sorrow and solicitude in their lifetimes.

“We never say goodbye to the ones we love, we only bid them farewell,” said the Rev. Brian McSweeney as his addressed the congregants during his homily. McSweeney spoke of the mystery of death and how the experience of it is only understood by those who have already moved on to meet others who have gone before them. He humorously speculated on the prospect of  his wife Nancy Montgomery’s parents, Eileen and Ralph of Garrison, giving him an earful as he arrived to greet them.

The pastor of Our Lady Loretto until early in 2013, McSweeney returned from his parish in Ossining, N.Y. to celebrate the Mass for the man he referred to with great affection as Jimmy.

Referencing the classic Christmas-season movie It’s a Wonderful Life as relevant to Lovell’s life, McSweeney said, “It shows the impact that one individual can have on a community.”

Later McSweeney drew laughter when he characterized Lovell as “Irish by marriage (to Montgomery). “The Irish have a very peculiar way of celebrating this transition, of celebrating death with music and laughter.” McSweeney, obviously drawing from his own roots in this regard, explained that in the Irish immigrant experience, members of the family would leave home for faraway lands knowing they might never see loved ones again.  Therefore they tended to see death as just one more of life’s experiences to be celebrated.

McSweeney and his concelebrants, the Rev. Thomas Kiely, the current pastor of Our Lady of Loretto, and the Rev. Robert Warren of Graymoor in Garrison, wore white vestments similar to the cloak over Lovell’s casket. In the Roman Catholic tradition, the white cloth as well as the tall Paschal candle positioned at the head of the casket signify a life with God beginning at baptism (birth) and reaching fulfillment at death as a soul reunites with God.

Family members and friends read from both the Old and New Testaments of the Bible during the ceremony. The central Bible reading of the Mass, the Gospel, read by Deacon Paul Smith of St. Mary Mother of the Church in Fishkill, told the parable of the Good Samaritan intended to underscore Lovell’s service to his family, friends and community.

Lovell’s boys Finn, Jack and Hudson brought the offering gifts of water, wine and bread to the altar where, according to the Catholic tradition, the priest transforms these gifts into the body and blood of Jesus Christ. McSweeney then invited the Catholics present to approach the altar to receive the offering of communion wafers and wine from the priests, commemorating Jesus’ last supper with his apostles before his death and resurrection into heaven.

Among the audience for the Mass were U.S. Congressman Rep. Sean Maloney, State Senator Terry Gipson, Assemblywoman Sandy Galef, Town Supervisor Richard Shea, Cold Spring Mayor Ralph Falloon and most of the members of the Town Board and the Village Board. Lovell was an active participant in Democratic Party campaigns. Nancy Montgomery serves on the Town Board.

McSweeney early on pointed out that Lovell was actually not a member of the Catholic flock but was in fact raised in the Episcopalian rite at St. Philip’s Church in Garrison, where his parents are buried. The Episcopal faith is the Protestant sect closest to Catholicism. Rev. Frank Geer, Rector of St. Philip’s, was on the altar and also spoke about Lovell.

Geer told some humorous anecdotes regarding Lovell’s curiosity over a wide range of interests and his skill at mastering the techniques of varied enterprises. But, he said to laughter, the question still remains, “What did Jimmy do?”  He related how even his wife Nancy was puzzled by this question. But he said son Jack answered the question definitely by declaring: “What Jimmy Lovell does is what Jimmy Lovell wants to do.”

Support for his children’s activities in music, sports and theater were a central concern of Lovell’s, Geer said. He told a particularly poignant tale of how Lovell in his youth had won the starring role in the Haldane High School production of the stage musical, Oliver and then got to see his son Hudson in the same role at the Depot Theatre in the summer of 2012.

“He had an extraordinary gift of love and life that he gave to all of us in this community,” said Geer.

From beginning to end the ceremony was infused with music.  At the outset former Cold Spring Mayor Seth Gallagher played sorrowful laments on a set of the uilleann pipes he crafts. The St. Philip’s choir offered several hymns accompanied by organist Jeff Lutz. Soloist Margaret Vetare rendered a stirring version of the hymn Leaning on the Everlasting Arms.

The choir also sang A Parting Blessing by J. Jerome Williams, a traditional Irish refrain, which begins “May the road rise to meet you; may the wind always be at your back”.

After a final blessing over the casket, his family and friends followed him out of the church with the choir and audience singing the Lennon/McCartney song Let It Be. One verse reads: “And when the brokenhearted people/Living in the world agree/There will be answer, let it be/For though they may be parted/There is still a chance that they will see/There will be an answer, let it be.”

Outside on Fair Street tears mingled with the rain as the assembled exchanged embraces and murmured words of support before a delegation from a line of television cameras and microphones positioned on the sidewalk across the street from the church. And then Nancy Montgomery waved her thanks and left in a car to say a last private goodbye to Jimmy Lovell.

One thought on “Lovell Funeral A Tearful Farewell”