Right now seems like as good a time as any to think about potatoes, those cozy little lumps of starchiness rich with flu-fighting Vitamin C. So stolid is their appearance that they’ve become the vegetal symbol of our own indolence – we do not call ourselves couch artichokes, now do we? And if ever there was a month when indolence is likely to dog us, January is it, as we recoil from the cold and turn inwards to quietly survey the damage (psychological, economic, adipose) wrought by superstorm Christmas.

Not that thinking about potatoes will in and of itself keep you warm as you lie there on your sofa. On the other hand, it will not make you colder than thinking about anything else. According to Scientific American, our brains consume a disproportionate amount of our bodies’ energy – some 20 percent of it, despite accounting for a mere two percent of our body weight. But no studies to date have proved conclusively that they burn more energy thinking about difficult things like Fermat’s last theorem or healthcare than they do thinking about simple things like potatoes. So the choice is yours.

And I know which one I’d go with. 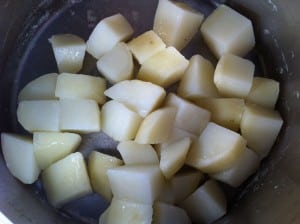 In fact, I found myself engaging in some prolonged potato contemplation just the other day, after my family returned from an extended holiday trip and came face to face with our empty refrigerator and pantry. This wasn’t a surprise; we had planned it by eating everything perishable before we left. Still, surveying a barren kitchen gives one a terribly desolate sensation in the pit of one’s stomach, and I decided on the spot that a stash of potatoes was the best cure.

Although I shortly thereafter bought several pounds of russets and Yukon Golds, I proceeded to ignore them because my California sister arrived for a belated visit, and, as she often reminds me, the only thing that sustains her through those long, hard California months is thoughts of the food I cook for her at holiday time.

Okay, that’s an exaggeration. Whatever. For her, I wanted to make crepes, so I cooked up a Julia Child batch with a freakishly rich chicken filling. The filling was good but the crepes failed because I do not have a crepe pan. And then I remembered a recipe from Simon Hopkinson’s wonderful cookbook, Roast Chicken and Other Stories, for crepes Parmentier – light, soft potato cakes a little bigger and thicker than silver dollar pancakes. They are reliably great, and a very nice way to dress up a dish you’d normally serve with roasted, mashed, or boiled potatoes, or with bread. We had them with beef stew. 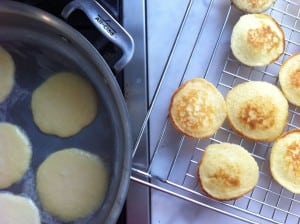 Hopkinson’s recipe is gourmet – the batter is passed through a sieve and cooked in clarified butter. But it’s easy enough to dumb down. The potatoes don’t mind. Lord knows, they’ve suffered worse indignities. For a century and a half, after being uprooted from their Andean homes and dragged off to Europe, they were disparaged and slandered, described as sustenance suitable for only livestock and starving peasants.

Diderot wrote, “This root, no matter how you prepare it … cannot pass for an agreeable food.” Which is, hello, just wrong on so many levels, starting with the fact that the potato is quite possibly the most agreeable food of all time. Today, potatoes are the fourth largest food crop worldwide, after corn, wheat, and rice – and the most important vegetable one. And everyone loves them, whether as chips or fries, mashed or roasted, baked or made into pretty little crepes.

All of which will give you something to think about as you lie on your sofa, cogitating the month away.

Adapted from Roast Chicken and Other Stories, by Simon Hopkinson

butter, for frying the crepes