A few years ago, “Eat the Rainbow” was the clever new philosophy being promulgated by nutritionists. They tend to think of Americans as kindergarteners when it comes to our capacity to make good choices about food, so they get excited about easy aphorisms like this one, which exhorts us not to eat more Skittles and M&Ms, but rather to consume fruits and vegetables in a wide variety of colors.

They have a point: It turns out that color is often a clue to which vitamins, minerals, and phytochemicals a plant food contains. The broader the range of pigments you eat, the more varied your nutrients. 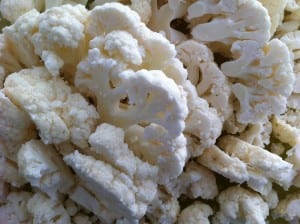 That’s all well and good for us simpleminded Americans, but it leaves plain white cauliflower out in the cold. Which is no place for it, because this colorless vegetable has, per head, nearly 500 percent of your daily value of vitamin C, half the vitamin B-6 you need, half the potassium, and nearly a quarter the fiber. Plus, it contains antioxidants and phytochemicals that reduce DNA damage and slow the development of cancers.

Moreover, cauliflower is a great winter staple — filling, comforting, and naturally creamy without being fattening (that entire head has only 146 calories). And it’s easy to cook, which earns it my gratitude this month, because January for me has been abominably hectic — a month when finishing one task has only earned me the right to turn my attention to the next, even-more-urgent one. Whereas I was counting on January to be dull, soporific. A time for quiet meditation interrupted only by skiing. And for skiing fuelled entirely by slow, easy cooking.

Instead, I am mostly speed-cooking — preparing, in a keen panic, meals that I haven’t bothered even to think about until my kids say, “How soon is dinner? I’m hungry.” To which I reply, after looking at the clock, “Oops.” And then, “Soon!” This last lie merely to prevent them from binge-snacking their way through the next 30 minutes then sitting down to dinner stuffed. 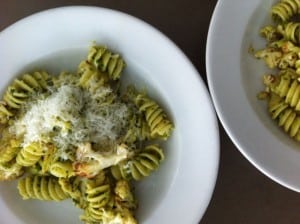 Yesterday was luckier than most such days because their question prompted in me an immediate craving for pasta and cauliflower, both of which I had on hand. And it is always a pleasure to cook something you crave, like driving down a road to visit a person you very much want to see.

Not that my situation was ideal; I didn’t have an actual recipe in mind. But I knew that I could get things going — preheat the oven, slice up the cauliflower, put the pasta water on to boil — and figure it out as I went. Which I did. As I sliced the cauliflower, I suddenly recalled eating a wonderful dish that paired the vegetable with green olives and almonds.

It seemed easy enough to replicate, not least because I had a jar of almond-stuffed green olives on my shelf. Popping it open, I felt a little guilty because I suspected my kids might not like the combination, but, you know: Oh well. I didn’t have the bandwidth to worry about that at the moment.

Instead, I pulsed the olives in the food processor along with a bunch of parsley, a few cloves of garlic, and a squeeze of Meyer lemon juice. Just then, Henry, nearing starvation, crawled into the kitchen to check up on me and I offered him a taste of the olive mixture on a cracker. He parked himself by the food processor after that, sneaking bites every time I turned my back.

A few minutes later, when the cauliflower was brown at the edges, Dosi showed up and started nibbling the crispiest pieces from the baking sheet. For a brief moment I wondered if I would ruin my kids’ pleasure by mixing everything together, but, you know: Too bad. I drained the pasta, tossed it all in a bowl, and we sat down to a meal that everyone agreed was startlingly good, and their enthusiasm brightened my spirits, kind of like how a rainbow does after a storm.

I use whole-wheat pasta for this dish not because I’m a health nut but because it tastes better with cauliflower; it just does. The olives are available at Foodtown, in the organic section, and at Nature’s Pantry.

zest of one lemon (preferably Meyer)