I know it’s a little after the fact but there’s this Christmas carol/earworm that keeps coming to mind lately.

It begins “In the bleak mid-winter …” and goes on to something like “snow had fallen, snow on snow, snow on snow …”

You get the picture. ’Tis the season. Spring seems a distant dream and even the menu seems a little colorless. My friend Z. calls it “the brown food of winter.”

Let me attempt to brighten things up a bit yet stay relatively seasonal: roasted beet risotto. 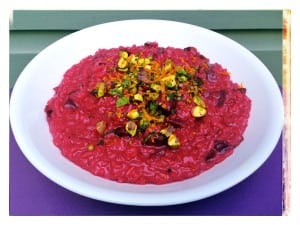 Winter offers few market-available vegetables and root vegetables offer a certain sweetness that is much appreciated in this season and risotto is a perfect culinary medium for these cold months. This recipe is a version I’ve been playing with since first encountering a beet “farotto” at Pepolino, a small Tuscan restaurant in Manhattan.

First, the beets: I tried them roasted with skins-on, shredded raw and once again defer to Molly Stevens’ enlightening All About Roasting (mentioned in last week’s column). Her technique — peeled first, cubed, oiled and seasoned, roasted at high heat on parchment paper (to discourage steaming) — yields a caramelized crunch and firmness missing from other methods. Half will be incorporated from the beginning to infuse the risotto with a beautiful ruby color.

The “gremolata” is a personal paean to further chase away the winter blues. Gremolata is a traditional herbal mixture usually consisting of lemon zest, garlic and parsley usually used to finish off osso buco Milanese (unctuous braised veal shanks usually served with a saffron risotto). It calls to mind Egyptian dukkah or Indian za’atar, spice and nut blends used as garnishes for a variety of dishes (two culinary secret weapons I think will be worthy of further exploration in next week’s column). Oranges, pistachios and mint are each individual accompaniments for beets and together provide a dash of something completely bright and exotic without overpowering the dish.

The ‘process’ of risotto

Less a specific recipe than a collection of techniques, once mastered risotto offers the home cook a platform for endless variations and creativity. Despite its reputation as time-consuming and difficult, nothing could be further from the truth. Simple elements — rice, seasonings, broth, and cheese prepared stovetop — yield creamy comfort food in no more than 30 minutes, guaranteed to warm these endless February nights. What follows is the basic “process” of risotto.

This is where all flavor begins: sautéing onions in butter and/or oil. Additional flavorful elements that can withstand 20 minutes or so of simmering and — meat (particularly pork), dried, reconstituted mushrooms, herbs — all form the base for the next phase.

Simply “toasting,” referring to the rice, which is added without liquid and allowed to actually soften in the flavorful seasoned oil without ever adding liquid. The actual process, particularly with specific rice varieties (Arborio, Carnaroli or any of the other short-grained, high-starch varieties traditional to risotto) serves to break down the outer starchy layer, which is the first step in generating that final creaminess. (Note: This works well for a variety of non-traditional risotto or other grains and ingredients — farro, quinoa. The technique can be used for small pasta forms and I have actually seen it used as a cooking method for finely diced, sturdy vegetables like celery root with great results.)

Traditionally this step is finalized by the addition of a glass of wine, incorporated fully before proceeding to the next step.

This is the “work” of the recipe. The stock is incorporated, a ladleful at a time, stirring until it is almost fully absorbed, this process repeated until the risotto is fully cooked — about 20 minutes total, but actually until the rice is cooked just barely al dente. (Note: Although I specify stock — and absolutely the more flavorful the better — the simplest risotto can be made using purely water.) The persistent stirring is important in maintaining constant temperature and consistent absorption throughout.

About 10 or 12 minutes into this process, additional vegetables that require some cooking are added. In this recipe, it will be half of the beets but peas, asparagus, fresh mushrooms, or even corn, are typical. (This would also be the time to add delicate fish or lobster, shrimp and scallops when making a seafood risotto.)

The final touch: “Manteca” is Spanish for “butter,” and this process is said to have been added by the Spanish Lombards during the Renaissance. Once the rice is cooked, butter and/or cheese (typically Parmesan, but occasionally mascarpone or even Gorgonzola) are whipped in off-heat until the dish achieves its final creamy texture. Again, don’t be scared or intimidated.


1) Roast beets: Heat oven to 425˚. Peel and dice (into ½-inch cubes) beets. Toss with a splash of olive oil and salt and pepper and roast, in a single layer (on parchment paper if it is handy), for 25-30 minutes. This can be done a day or so ahead of time.

2) Prepare the gremolata: Toss the chopped pistachios, orange zest and mint (or parsley) and set aside.

3) The risotto: Heat broth in a large saucepan and keep it on a low simmer on a rear burner. Have a large ladle handy.

5) Adding the stock: Add two ladles of stock and half the beets, stirring continuously, again until almost evaporated. Repeat this sequence — adding a ladle of broth at a time, stirring until nearly evaporated. You will follow this process until done — about 20 minutes total — broken only by one additional event: at 10 minutes add the remaining beets. The risotto is done when all ingredients are incorporated but still a bit wet and the rice is done.

7) Mantecatura: Remove from the heat and incorporate the goat cheese, a little at a time, until desired creaminess is reached. To serve, spoon into shallow bowls and garnish with a tablespoon of the gremolata sprinkled over the top of each serving. Serve hot.