May 20 referendum on school budget ballot

The library initiative, which would create a fixed $75,000 annual allocation, is separate from the school budget and does not involve the school board. Garrison is not an incorporated entity so the school district taxing authority is the only existing governmental vehicle to collect the proposed new levy.

The decision by the Desmond-Fish trustees to pursue public funding was first made last fall at their annual meeting and was reported on Philipstown.info on Oct. 29, 2013.

The voting will take place at the Garrison School at 1100 Route 9D in Garrison with the poll open from 6 a.m. to 9 p.m.

Seeking public funding marks a transition for the Desmond-Fish Library. Founded in 1980, the library has operated and grown primarily through the use of an endowment and annual fundraising appeals. The annual budget currently is approximately $583,00 of which $300,000 derives from the endowment. Library trustees have determined that a third source of dependable funds is needed to protect programs and service an aging physical plant.

In a released statement, Hamilton Fish, president of the board of trustees, said, “Our board actively seeks diversified funding streams including grants and fundraising in order to bring special programs, books and services to our public. But we’ve grown in the last 34 years, the building has aged, things have gotten more expensive, and the board is tasked with securing sustainable funding. We recognize that we’re at the point where we need to ask the public to invest in the library to help maintain the institution and keep up with community demand for library services.”

Other board members in an interview with Philipstown.info underscored the organization’s financial prudence and challenges as well as the educational and civic role of the library in the life of the community.

“Alice Desmond founded the library as what she called an acorn she wanted to grow to become an important ingredient in the community which she loved,” William Sadler said. “We think of ourselves as very good stewards of the endowment. We keep the draw to 5 percent a year in a three-year moving average.” Sadler also said studies have shown that increasing the drawdown on an endowment can erode the principal and the board wants to avoid that alternative to preserve the library’s future.

Sadler said both the Hudson Valley and the State Library Associations had described the Desmond-Fish as a “champion in fundraising.” He said many libraries don’t fundraise at all and rely solely on public funds. The library raised $283,000 last year mostly from an annual dinner and the Friends of the Library group along with some modest government support from the county and town as well as the popular summer used book sale. 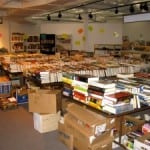 The library’s Program Room being readied for a sale.  Photo by Alison Rooney

Both Sadler and Trustee Jennifer Marrinan emphasized the board’s intent to maintain the level of endowment and fundraising contributions to the budget with the new revenue helping to maintain existing programs as well as assist in the creation of new programs. They said rising expenses were outpacing the library’s ability to keep up. “Donors have limits on what they can give,” said Marrinan.

The Desmond-Fish referendum recalls a similar and, at the time, controversial action in 2006 by the Butterfield Library in Cold Spring. The Butterfield Library sought a more ambitious town-wide approval for a tax that still generates $276,000 annually. In the aftermath of the successful vote, the town board initially refused payment but lost repeatedly in court when the library sued for the money.

Philipstown residents outside the Garrison school district would not be taxed for the Desmond-Fish levy.

Both the Butterfield and the Desmond-Fish actions are permitted under a state education law enacted in 1995 and signed by then Gov. George Pataki, a Garrison resident.

Sadler said the decision to pursue $75,000 from only Garrison residents arose from the board’s long range strategic plan, a calculation of likely financial need and library association guidelines that recommend seeking funding from the primary users. “It made sense to us to call upon the community we serve,” he said.

“We work hard to keep up with community demand for library services. We are open every day during the school year and six days a week in summer,” said Jen McCreery, library director, in the library’s public statement. “Programs range from pre-school age to older adults and include free access to computers and training in the latest technology, job-search help, DVDs and digital materials on demand,” she added.

Marrinan and Sadler stressed that the library plays an important public role for Garrison by sponsoring or hosting public lectures, presentations and meetings of all kinds, thereby promoting a sense of place.

They also pointed to the “project code spring” which introduces children to computer code writing and a proposed teen night with movies and popcorn as examples of community engagement and added educational benefit.

Sadler said the board had also undertaken energy cost-saving moves, including better insulation and new windows to reduce building expenses. But he said the now older building would require more renovation and upkeep going forward.

Additional information is available at desmondfishlibrary.org.