In spring, a body needs something bitter, sharp, and cleansing — something to get the sap flowing and the buds unfurling. Even if you haven’t been eating salt-pork and dried beans all winter, as your forebears might have done (or foie gras and petits fours, if you had those sorts of forebears), your system is likely sluggish. Dandelion greens are a perfect tonic, and 100 percent free to boot.

Free food is cool, and here in Philipstown you don’t have to dumpster-dive to get it. You can just go outside. Not to your garden, no, because vegetables you grow yourself are not free; they require great inputs of time and energy and stuff. But elsewhere, you will find hundreds of dandelions growing all by themselves, wherever they’re not supposed to.

Children intuitively love dandelions — disobedient rascals that eagerly lend themselves to the making of crowns and necklaces and curly-stem creatures, and of wishes once they’ve gone to seed. Wise old women love them, too — for dandelions are full of antioxidants and have superlative healing powers, especially when it comes to removing toxins from the liver and kidneys, and regulating blood pressure. Indeed, it’s only us middle-aged grumps, intent on impressing one another with our impeccable lawns, who see them as a nuisance.

As a tween, I was briefly conscripted into the anti-dandelion camp. Assigned the duty of removing them from our large yard, I spent many hours scooching around the grass, thrusting a gardening fork into the dirt to pull them up by the roots — roots so deep and tough they seemed to be anchored to the very mantle of the earth. I quickly grew to despise their stubbornness.

In my 20s, I became aware of their medicinal value, exposed as I was to food history, lore, and literature. So when dandelion salads started appearing on restaurant menus, I thanked heaven that harvesting them was not my responsibility, and ordered them, curious to see whether these weeds could win me back. 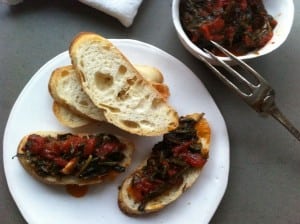 Which they did, since they were typically served with both bacon and bacon fat, the latter whisked into the dressing. Indeed, so often did I encounter dandelion greens prepared this way that I started to suspect that chefs were too nervous about the greens’ bitterness to trust anything but the Rambo-like power of bacon to subdue it.

Now, call me a spoilsport, but it seems to me that if dandelion’s special magic is that it cleanses your system and detoxifies your organs, then maybe — maybe — you should not consume a quarter-cup of pig fat with it.

After that, for nearly a decade, I nibbled dandelion greens here and there, but I did not cook with them. Then a few years ago, I met a couple of chef-farmers who were experimenting with bitter liqueurs, tonics, and herbs, and they showed me how to slow-cook dandelion greens in a pot with tomatoes, garlic, and a good dousing of olive oil, nothing more.

The flavor of the resulting dish is so assertive it almost hurts. I am no masochist, but I crave it regularly, enough to bother making it only for myself, especially at this time of year, before the dandelions have blossomed, when the leaves are at their best.

Yet, as always seems to happen when I decide that a food is too weird for my kids, they’ve announced that they like it, too. I watch them closely as they eat it, dipping their forks right into the pot. The first few bites are an assault, and they walk away. Minutes later, they are back for more, and then still more. Watching them, I wonder if it’s true that we grow to like bitter tastes with age, as nutritionists assert, or if a craving for things like dandelion greens lies dormant in all our bodies, just waiting for spring to awaken it?

This makes a wonderful pre-supper snack with a glass of rose. The greens can also be the basis of a sandwich, topped with melted provolone. NB: If you forage for wild dandelion greens, be sure to take them from yards and fields where you have permission to harvest, and that are not sprayed with any pesticides, ever.

1 baguette, sliced, brushed with olive oil, and toasted or broiled