A couple of months ago, my son George came to me after school and asked if I’d make some waffles for snack.

I said no, honey, waffles are too difficult. The batter drips everywhere, plus dealing with the waffle iron is a pain. They’re for, like, holidays.

He walked off, but a few minutes later he was back. “Can I make them?” he asked. 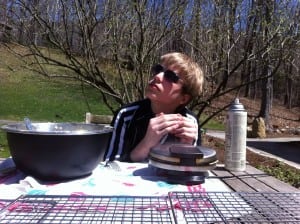 He asked where to look for a recipe, and I suggested one of the big, general cookbooks, Joy or Martha. He opted for the latter, and selected a recipe that required separating the eggs — 3 of them — beating the whites until stiff, and then folding them into the batter.

He asked if I’d help him with that part, the egg whites, so I did, happy to have a chance to redeem myself, and also to show him how to judge when the egg whites were just right, and to demonstrate what folding was — and meanwhile thinking, you see what I mean about the difficult part? and just assuming he was working the waffle bug out of his system.

But the next day, he made them again, and the day after that, too — by now doing the egg whites himself, and laying a kitchen towel under the waffle iron to catch drips, and cleaning up beautifully when he was done. He continues to make waffles, two batches a week, and has memorized the recipe. On one of these recent, lovely spring afternoons, he went down to the basement, found an extension cord, and plugged in the waffle iron outside so he could make them on the patio.

He freezes the extras. In the morning, he takes one out and pops it in the toaster for breakfast.

His waffles are wonderful. They are crisp on the outside and light within. And because he always uses good buttermilk (shout-out to Foodtown here for carrying Kate’s Real Buttermilk), they have that lovely depth of flavor baked goods acquire when there’s a little acidity in the dairy. 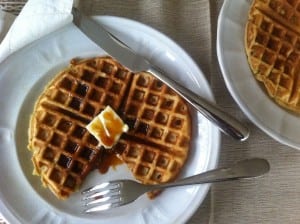 Recently, he has started to ask me questions about waffles, like if waffle batter and pancake batter are the same, and what would happen if he increased the sugar in his recipe. I said no to the first question — waffles should have more fat and more sugar, which helps them to crisp, though they are sometimes used interchangeably. To the second, I said, “Why don’t you try it? And pay attention to what happens not just to the flavor but to the texture, too, when you add more sugar.”

I don’t generally push sugar. And, come to think of it, I don’t deep down support the idea of waffles as a go-to after-school snack. But I’m so proud of George for taking something I’d dismissed as tiresome and tackling it, and for listening to his own cravings, and for trusting in his ability to figure out the hard parts.

I often find myself wanting to believe that the kitchen is a metaphor for life — I spend too much time there for it to be just about eating—and sometimes life plays along with this conceit. George now knows what it means to really master something: To repeat a technique so many times that you can stop paying attention to the instructions and start focusing on the process; so many times that you can play around, and bring creativity to bear on even a meticulous task.

He’s also starting to figure out that he’s simply better at some things than I am, which is a lesson — sigh — that we were both going to have to learn eventually.