John Cronin speaks at Beacon Institute on May 15

For more than 300 years, the Hudson River set the rhythm of life for generations of fishermen who relied on its bounty for their livelihoods. Despite the Hudson’s reputation as an environmental success story, its long tradition of commercial net fishing is over. At 7 p.m. on Thursday, May 15, environmentalist John Cronin will explore the tragic loss of the Hudson’s commercial fishing culture in a talk presented by Beacon Institute for Rivers and Estuaries of Clarkson University.

The Hudson Riverman: The Long Life and Untimely Death of an American Icon will take place at the Institute’s Center for Environmental Innovation and Education at Denning’s Point in Beacon. The talk will include excerpts from Cronin’s award-winning documentary film, The Last Rivermen, which he wrote and co-produced. The evening is free and open to the public. Online registration is requested.

Cronin, who was Beacon Institute’s founding director and CEO and the River’s full-time Riverkeeper for 17 years, has worked as an advocate, legislative and congressional aide, commercial fisherman, professor, author and filmmaker. The Last Rivermen reveals how toxic contamination of the Hudson began the destruction of the river’s 300-year family fishing tradition. The film, released in 1992, was directed by Robert Nixon, a producer of Gorillas in the Mist, and narrated by Alec Baldwin. In his talk, Cronin will incorporate many stories from his years as a commercial fisherman and of those who appeared in the film. 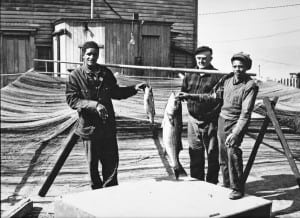 The story of the Hudson riverman’s swift decline is entangled with the rise of industrial pollution, which began to contaminate populations of striped bass, catfish, eel, perch, carp and sturgeon by the 1960s. It was undeniable evidence of highly toxic levels of PCBs in fish, particularly the striped bass, which first forced New York State regulators to institute closures of the Hudson River fisheries in 1975. Collapsing fish populations shut down the entire net fishery in 2010.

“Hudson Rivermen understand the estuary in ways that only those who live and breathe the river can,” said Cronin. “Their culture was ruined by a continuing combination of ‘corporate abuse and regulatory failure,’ a state court judge found in 1976.”

Cronin is senior fellow for environmental affairs at Pace Academy of Applied Environmental Studies at Pace University. He teaches environmental history, policy and advocacy, and is active in the area of water policy reform. He is embarking on his fourth decade of environmental work. He gained international attention for his work as the Hudson Riverkeeper from 1983-2000. He is managing editor for Beacon Institute’s new Watermark Blog, an online voice for Clarkson University faculty and guest contributors to inspire thinking on water and why we should care. Visit bire.org.

One thought on “Environmentalist Tracks Fate of Hudson’s Commercial Fishermen”