The only beets my kids ever truly loved were grated, mixed with ricotta and breadcrumbs, and folded inside fresh raviolis the four of us made one afternoon from scratch, insanely, rolling out the pasta dough ourselves, enclosing the filling and cutting out the shapes, boiling the finished raviolis then tossing them in butter — and in the process covering the whole kitchen in pasta flour, beet shreds, globs of ricotta, and dirty pots, pans, bowls, and utensils. 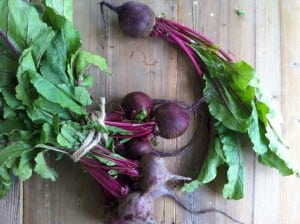 They made for an excellent dinner, those hard-won little dough packages, served with a green salad on the side. They didn’t amount to a whole lot of dinner, however, and we were all hungry again by the time the kitchen was clean — a task performed entirely (washing, scrubbing, drying, sweeping) by me. There was an oppression of dishes, a mess worthy of a battlefield. But, I reminded myself, what better use of a mother’s power than to subtly manipulate her children’s memories by editing out the negative parts of experiences she wants them to remember fondly? Indeed, I felt it was a smallish price for a great culinary victory, namely teaching my kids that they don’t hate beets categorically.

For sure, they absolutely hate beets all kinds of ways: pickled, boiled, and (most of the time) raw and roasted. They will not go near them at my friend Frances’s house when she serves them, as she often does, simply dressed in olive oil and sea salt. Two out of three of my kids (the boys) like beets OK in a fairly amazing chilled beet soup I made last summer, and they don’t bother to pick every single last one of them out of a kale salad with thinly sliced beets — only some of them.

But no matter how many negative beet experiences they rack up, they still remember those raviolis. So that if, for example, they are with me at the farmers market and spy a pretty bunch of small, new beets, they will say, “Remember those raviolis we made that one time? We should do that again. They were soooo delicious.”

This is the kind of thing that matters to me, perhaps more than it should: My kids see beets and a happy thought comes to mind. They don’t immediately think yuck. Many kids — many grown-ups, for that matter — think yuck at the sight of certain foods. It is a mind-closer, that word. And a closed mind can take many years and slaps of happenstance to pry back open.

I know. I didn’t discover I liked beets until I was deep into my 20s. I had grown up on canned and pickled beets, and loathed them. One night, I went to a bistro with a friend who ordered a salad that sounded disagreeable on the menu: roasted beets, goat cheese, and bitter greens. The dish arrived, my friend offered me a bite, and lo, I was free. Moreover, I was transformed into someone who would order my own beet salad the next time I went to a restaurant and would, on that occasion, offer a bite to some other skeptical, beet-averse friend, freeing him from beet-aversion, and so forth and so on, ad infinitum.

Which is just to say: early exposure is not a necessary precondition to adult-onset beet zealotry. Moreover, beets themselves are hardly necessary to a healthful diet; most of us Americans grow up just fine with nary a beet in our lives. So it would be irresponsible of me to promote the recipe below as one you need in your repertoire. But I can tell you this: If it’s beet-love you’re after, then this is the best way I know to play cupid and spark it.

Fresh sheep’s-milk ricotta is in season right now, and available for a short while at Union Square greenmarket; it makes this dish transcendent. If you can’t find it, use equal parts goat cheese and store-bought ricotta — the latter is too bland if used on its own.

(Note: recipes for fresh egg pasta can be found in most Italian cookbooks, and online; I like this one.)