For the myriad costumes that adorn Hudson Valley Shakespeare Festival (HVSF) players each season, there is a timeline, which usually begins soon after the conclusion of the season prior, when shows for the following summer are announced. Costume designer Charlotte Palmer-Lane has worked on at least one of the three plays each season for the past seven. She does what always comes first on that timeline: reads the play — even if it happens to be one of which she is quite familiar. This summer, as with last, she is designing two productions, Othello and The Liar.

HVSF’s Charlotte Palmer-Lane with costume rack (photo by A. Rooney)

When Palmer-Lane reads the script, it is not a leisurely affair. Rather, she proceeds slowly, doing scene breakdowns, figuring out not only who is in which, but taking text-based notes on things like if an article of clothing is referred to aloud. She’s also trying to figure out where costume changes should take place, and how fast they must be in order to go with the flow of the action; last year one had to be done in just 20 seconds.

After Palmer-Lane familiarizes herself with the text she talks to the director about his or her specific concepts or themes. Then the research and gathering period begins. She immerses herself in not just the clothing of the period and location involved, but in the social and political context in which the story takes place. She gathers photos and swatches of fabric, and often locates paintings from the period to communicate a style she thinks might work well. Once she has all that in hand, she creates renderings, first as rough sketches and then final drawings.

Performances take a toll on costumes

If the renderings are met with approval, Palmer-Lane begins to “build” the costumes. And there are many to build. Last year, for example, Three Musketeers had approximately 50 costumes, including a few duplicates used as back-ups for the inevitable, when the sweat and grime which are natural byproducts over the course of a summer in outdoor performances, take their toll. Laundry, managed by the costume supervisor and her assistant, is done nightly for much of the under-clothes. “It’s a big operation,” says Palmer-Lane — with full costume dry cleaning done every few days.

Other wear and tear comes from the tent and grounds conditions.

“They’re entering and exiting in rain and mud often, so shoes in particular, always take a beating,” says Palmer-Lane, adding that the new sand in the tent eliminates all heels, as they sink, so all footwear now takes the form of flats and wedges. Palmer-Lane takes all these considerations into her designs, taking care to avoid excessive layering and using lighter-weight fabrics as much as possible to make actors comfortable.

Meanwhile, the actors use the renderings as critical tools in their preparation. HVSF actress Katie Hartke, discusses this:

For anyone who’s seen a show at HVSF, they’ll know the lack of a set places great importance on the costumes, as they play a huge role in creating the world. So we all have to be as specific as possible. One of the reasons I love the first day of rehearsal is that I get to see the costume sketches for my character. I’ve spent weeks, sometimes months, thinking about who this woman is, how she moves, sees herself, and how she presents herself to society and the world. The costume design is one of the key pieces in that delightful puzzle, and with a wonderfully talented designer like Charlotte, it’s always exciting to see what she has in mind. As soon as I glimpse the renderings, ideas for the character’s mannerisms, style, pace, and attitude start to emerge. Once we get to the costume fitting, the type of fabric, weight, length and feel of the costume all add to the ideas that have been percolating. A woman in a frilly skirt, blazer and loafers moves and acts much differently than a woman in 17th-century Parisienne garb.

Palmer-Lane also works closely with the set designer, making sure colors chosen are in harmony, and the lighting designers, too, “because they are changing colors all the time and it’s easier to change a costume than a light set-up. If there’s a wig-maker, you’re collaborating with them as well. Costumers have to compromise the most,” Palmer-Lane says.

The collaboration, of course, extends to the actors, too. Says Hartke:

One of the wonderful qualities Charlotte possesses is her sense of collaboration. She always listens to and considers an actor’s ideas and interpretation of the character. She’s open to adapting and fine-tuning a costume if it helps me to make the character more specific, more real. What’s more, she always makes sure I feel comfortable and confident with what I’m wearing. There are stages of discussion, from seeing the first renderings to the fittings to the dress rehearsal and onto opening night. As we move through the process, we continually touch base on how the costume is working, from both an aesthetic and functional point of view, the latter of which is particularly important in our outdoor space. I trust Charlotte implicitly. Her creations play a huge role in who my characters ultimately turn out to be. 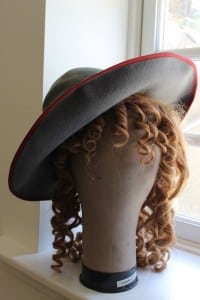 Palmer-Lane knew from the age of 13 this was what she wanted to do. She recalls having a Henry VIII doll (she grew up in England) and she made dresses for each of his “wives” — also dolls. After studying fashion theory and design, including pattern cutting and manufacturing in a two-year program, she continued to the Wimbledon School of Art, earning a B.A. in theatre design. That curriculum included, as was standard, training in set design, and some lighting design, as well as costume design. She had to learn to construct models of sets and built one for the last scene of La Traviata for the English National Opera School as her final degree project. Most costume designers working in the U.K. in theater also serve as set designers, something of no interest to Palmer-Lane. For that reason, when she graduated she headed to work in film and television, spending eight years working at the British Broadcasting Company, working on such productions as Miss Marple, Chronicles of Narnia and Dr. Who.

After marrying an American, Palmer-Lane moved with him to Washington, D.C., where she continued to work on film productions, then relocated to New York City, where she worked on Robert Redford’s Quiz Show. Three children and a move to Cold Spring later, she returned to her trade, first through volunteering at the Depot Theatre, and then through what has been continuous work at regional theaters. Aside from HVSF, she has worked on shows for Hudson Stage, Penguin Rep and Half Moon Theater as well as making occasional forays into New York City work, including the Mint Theater.

The costume — a dress for Lucrece in The Liar

Palmer-Lane’s description of the show: “The Liar is set, as per the script, in 1643. It’s the Three Musketeers, 20 years later. Originally a French play, written by Pierre Corneille, translated and adapted by David Ives. It’s all rhyming couplets with quirky, modern, rhymes. It’s a very amusing read and kind of a recipe for hilarity.”

… the character and her costume: “This costume is for Lucrece, [played by Katie Hartke]. Lucrece is the best friend of Clarice, and both are being wooed by Dorante, the liar of the title. Lucrece is less showy than Clarice, and (spoiler) actually ends up with Dorante. I wanted to make her clothing slightly less flamboyant than her friend to suggest a little more depth. I did a lot of research: paintings by Peter Lely and Anthony van Dyck in particular.”