Call them the first U.S. veterans — although they did not stay veterans for long, dying before their war ended and the country they fought to create existed.

They died of battle wounds or disease and injury in the American Revolution, their bodies consigned to a burial ground in the Fishkill Supply Depot, a vast Continental Army base just beyond present-day Philipstown. For years, few — if anyone — remembered them, as land around their graves got paved over in shopping malls and real estate ventures.

But on Monday, Memorial Day, a holiday established decades after the men (and perhaps women) of the War for Independence gave their all, they were remembered, their unmarked graves hallowed by a gun volley from the 5th New York Regiment of re-enactors, remarks from elected officials, and the attendance of 50 to 60 modern civilians. 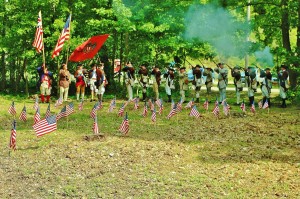 Members of the 5th NY Regiment of re-enactors fire a volley in salute over the graves of Revolutionary War soldiers at the Fishkill Supply Depot.

The Friends of the Fishkill Supply Depot (FOFSD) sponsored the May 26 event and wants to ensure that the dead and their last bivouac are respected. But some 230 years after they perished, those who confronted the army of an empire face a new peril from development.

“This is the most sacred soil in our country,” said Bill Sandy, an archaeologist who excavated the graveyard in 2007, proving rumors of a military cemetery to be true. “We have hundreds, perhaps a thousand buried here.” Sandy said that of all the sites he has worked on, “this place is at the top, No. 1 by far” in significance. Unfortunately, he said, 20 years or more ago, in commercial development along Route 9, some depot Revolutionary War dead “had their graves trashed. We’re not going to stand for it anymore.”

“The nameless dead here wait for us to protect them” and the FOFSD also “is trying to protect the remaining vestiges” of the entire depot, added Lance Ashworth, the organization’s president, a West Point graduate who served as an Army captain. Beyond the graveyard, “there are countless other acres,” Ashworth said. “This area is a time capsule of the Revolution. We can rewrite history” by studying its role in fielding an army and how “it carried the day,” he said. As well as marshalling men and materiel, the depot played a key role in blocking British movements in the Hudson Valley.

Stretching from southernmost Dutchess County (near the present border with Putnam County) to approximately Route 52 in Fishkill, the supply depot covered at least 80 acres, a major hub for training and pre- and post-deployment activity, as well as stockpiling of food, weapons, and the nuts-and-bolts of war from 1776-83. Not far away, down the Albany Post Road (now Route 9) from the supply depot, Revolutionary Army encampments and strategic outposts covered parts of current Cold Spring and Philipstown. 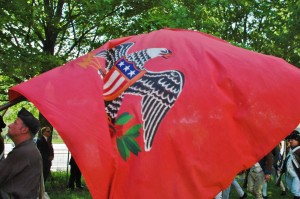 The eagle of the 5th NY spreads its wings on Memorial Day at the Fishkill Supply Depot.

According to Ashworth, the depot “was like a military city during the Revolution.” It contained barracks, stores, officers’ headquarters, craft and smith’s shops, hospitals and the graveyard, which lies next to Route 9, just north of a Mexican restaurant and south of a Snook Road gas station-car wash. The Van Wyck homestead, a colonial house used as a Revolutionary War command post, stands at Snook Road and Route 9, its yard a verdant respite above speeding Route 9 vehicles and I-84.

The troops at the depot often lacked sufficient food, clothing and blankets, other supplies, and pay, and at least one officer died as a result: A freshly identified grave holds the remains of Capt. Zachariah Beal, a New Hampshire man killed trying to stop a mutiny by malcontented and apparently drunken soldiers.

Ashworth observed that the hardships of Valley Forge lasted a winter, but those at the supply depot endured seven years. “Multiply the misery of Valley Forge by seven — that’s what we have here,” he said.

Sandy told Philipstown.info that the depot rang with voices in three languages, French and German as well as English. Some soldiers, French Canadians, enlisted during an ill-fated American attempt to win Canada. Others were German-speaking settlers from beyond New York. There likewise were African-Americans, “both free blacks and enslaved blacks, in our army” at Fishkill, said Sandy. He mentioned an officer who with his African-American troops defeated British forces until he was slain near Fishkill, his body carried to the supply depot and interred. 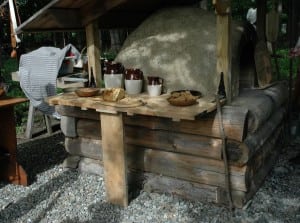 A Revolutionary War-style oven provides sustenance for participants in the Memorial Day commemoration at the Fishkill Supply Depot.

“We have an awful lot to learn from the veterans buried here who made the ultimate sacrifice for the freedoms we have today,” said State Sen. Terry Gipson, during the ceremony. “We’ve got to find a way to see that it gets the recognition and support it deserves. I will remain dedicated to doing everything I can.”

Listed on the National Register of Historic Places, the depot nonetheless is not a national or state park and is largely privately owned. A sign near Snook Road — a stone’s throw from the soldiers’ graves — advertises acreage suitable for commercial development, although across Route 9 defunct structures at the Dutchess Mall still stand empty.

Ashworth said after the ceremony that FOFSD would like to buy the available property and regularly speaks with the owner. However, he noted, “the fact he’s now trying to sell the land” brings new danger that “heightens our anxiety.”