Philipstown’s Town Board last week ended the public hearing but not the debate over the Garrison Volunteer Fire Company’s intended purchase and financing of a tanker-pumper truck.

The exact level of financing, and the total in GVFC reserves, remained undetermined, prompting the board to seek more data before voting on whether to approve the venture.

Also at its June 18 workshop, the board continued the 6-month-old moratorium on wind-turbine applications for another three months, allowing more time to draft a town law on installation of such backyard energy-generating devices.

A month after the first session of a public hearing on GVFC acquisition of the 3,000-gallon tanker-pumper, the Town Board returned to the subject.

The GVFC planned to buy the pumper-tanker through a lease-purchase financing agreement of up to $309,500. But Town Board members, Freilich and Regele, and Miller alike proposed that the actual financing amount could be considerably less — though an exact number proved elusive.

As initially listed, at $309,500, “the dollar amount is not accurate,” said Councilor John Van Tassel. “We need to get it accurate.” 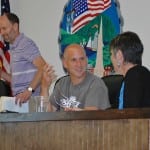 “We don’t have all the information we need,” Supervisor Richard Shea added. “We do need an exact dollar amount for the purchase.” Before voting at a future meeting, “we anticipate receiving two things: obviously, a dollar amount that’s going to be financed,” plus details of an insurance pay-out and “what that covers as far as equipment,” Shea said.

In analyzing GVFC finances, Shea said, “what I’m seeing is $109,340 that we feel should be allocated to the purchase of the tanker, to drop the financing.”

Despite their numerous questions, Freilich and Regele said they support giving the GVFC the resources it needs. “If it’s the collective wisdom that this truck is a good idea and it’s for the community and what not, that’s the way things work,” Regele acknowledged. “However, I think it’s important that if this decision is to be made, it be made [based] on the facts.”

He objected to what he described as GVFC stockpiling of cash. “The taxpayers’ money gets spent, with this excess money sitting around. With cash reserves around … the money is frittered away” on questionable outlays instead of things like the tanker, Regele argued. “There’s probably about $150,000 to $175,000 that’s available in cash that could very easily be used to pay for this tanker.” 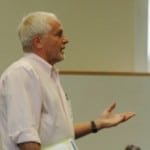 Joseph Regele addresses the board.

Regele also called for a different GVFC approach to budgets, to track line by line exactly how much comes in and goes out for various items. “We don’t know what they’re doing with the money. Can we have a real budget?” he asked the Town Board members, whom he depicted as lax overseers of GVFC finances.

Bristling, Shea mentioned endless hours devoted to GVFC oversight. “To not recognize that we cut the budget by 27 percent … in one year” is to miss a significant point, he said. Moreover, “to say we have no idea where the money goes is not true; it’s just not true.”

Councilor Dave Merandy said the GVFC appeared to be instituting changes and “it seems like everything is going the right way.” Nonetheless, he said, “these budgets aren’t clear and they should be clearer. I don’t suspect there’s anything wrong” but clearer budgets, with inclusion of reserve amounts, would eliminate a lot of the public anxiety, he said. 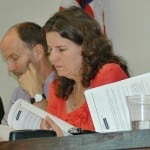 Councilor Nancy Montgomery expressed appreciation to both Regele and the GVFC for their contributions. “We do spend a lot of money on emergency services,” she said, adding that a few years ago, when the Town Board reviewed the matter, it found Philipstown was “in the top 5th percentile for per capita costs for fire and emergency services in New York state. I think we’ve worked hard at chipping away at that, really paying close attention to these budgets and trying to get them under control,” she said. “It’s not going to be an overnight fix.”

Freilich linked the costs to lack of fire department consolidation. Town Board scrutiny of fire department matters included commissioning a study by an outside expert whose conclusions proved unpopular with firefighters and controversial town-wide. “We are among the highest-cost per capita,” Freilich said. “I’m sure that’s because we have four fire companies and however many emergency services. The study was done. It recommended consolidations. Consolidation is the basic issue underlying all of this.”

Councilor Mike Leonard, who leads the Town Board law-drafting effort, said ordinances elsewhere can serve as models for a Philipstown law that might also consider such local features as ridgelines and scenic viewsheds, without imposing a complete wind turbine ban. “It isn’t an all-or-nothing thing, in my opinion,” he said.