Our refrigerator is misbehaving. Lately, everything stored in its bottom drawer turns icy, as if Elsa, the accursed sister from Frozen, had been put in charge of managing our household’s food preservation.

This didn’t come as a total surprise. The fridge has been signaling its demise for a long while by emitting a regular series of knocks that sound as if someone angry were banging at the door. These rap-rap-raps have often surprised whichever guests happened to be in our kitchen when they occurred, but have not so much as ruffled our eyebrows — we all stopped noticing them after a repair guy told us it would cost so much to fix the underlying problem that we might as well get used to the noise until total failure occurs.

Yet as fully-anticipated as this moment was, the misbehavior of the fridge has been accompanied by sadness. Not over the infirmity of the appliance itself (though I am quite capable of being sentimental about large metal things), but over the stuff contained in that bottom drawer. 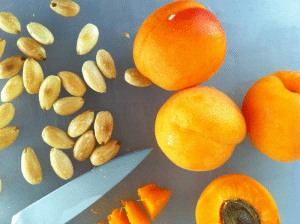 And there was plenty of it to mourn, for this is the season of stuff and more stuff — the season when early summer’s sweet, generous yields merge with late-summer’s racy abundance, and a wanton shopper like me can come home from the farmer’s market with far too much of far too much, from first-crop corn-on-the-cob, apricots, and peppers to last-hurrah lettuces, snow peas, garlic scapes, and strawberries (to say nothing of the impossible-to-resist fish, beef, bread, honey, cheese, pastries, tamales, eggs and kombucha).

Yesterday, I had to throw out two recently-bought, iced-up heads of beautiful lettuce, a bag of glassy organic cucumbers, a clump of frozen blueberries, several herbs, and a big bunch of carrots. I initially thought the carrots would survive our private ice age, but when I bit into one, it dissolved into baby-food-like mush in my mouth. Yuck and heartache.

Fortunately, the upper reaches of the fridge are hanging in there for now. Fortunate, too, that I’d stashed up high some rice and quinoa. Making extra grains has become a new summertime habit. Late at night, when the air is cooler, I will boil up a big pot of rice, millet, farro, and/or quinoa, toss them with some alliums and herbs, maybe a little oil and either vinegar or citrus, and refrigerate them. 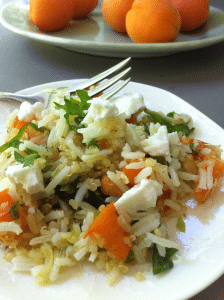 I find that my appetite is fickle when it’s hot out — as in, I have none whatsoever until suddenly I realize I’m starving. With grains in the fridge, I can think to myself, “OK, then, what am I in the mood for?” or “I’d better eat something fast or I will faint,” without worrying that I don’t have time to cook up a complicated, healthful dish. I simply mix the aforementioned grains with whatever seems right at the moment: tomatoes, avocado, and cilantro, perhaps, or fava beans, mint, and pecorino, or soft-boiled egg and siracha.

Turns out, I can also mix those aforementioned grains with whatever doesn’t happen to be frozen, and turn them into a side dish to serve with grilled pork chops. The other day, that meant chopping up a half-dozen apricots that were ripening on the counter, toasting some almonds stashed in my pantry, crumbling up a nice block of feta from the cheese drawer, and slicing a handful of mint that’s been growing under the lilac bush. It made for a surprisingly lovely supper, even if the nice green salad I would have liked to serve alongside was lost to ice. Let it go, I hummed. The past is in the past.

Grain Salad with Apricots and Almonds

1 lime, zested and juiced (plus more lime juice, if needed)