My daughter, bless her, will lick a peach.

This display of bravery swells my heart, even if, immediately thereafter, she narrows her eyes and shakes her head.

“Too sour,” she says, both annoyed and apologetic.

In all likelihood, her impromptu verdict means that she will not revisit peaches until she is well into her teens.

She is 10 now, and I want her to love good food — food that will make her strong and healthy, calm and clear-minded. I also want her to experience the things that thrill me, like a perfectly ripe, exquisite peach. But most of all, I want to stop worrying about her diet — and this, at heart, is simply a permutation of the great longing every parent feels, always and forever: to be confident that your children, left to their own devices, will make the right choices so that you can stop monitoring them. 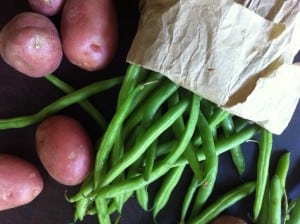 Her brothers are like that. They will add lettuce and tomatoes to their sandwiches, eat entire peaches and come looking for more.

With Dosi, I have to be more vigilant. Left alone, she will live on cereal, frozen peas, macaroni, and cinnamon toast, with an occasional bowl of frozen blueberries topped with milk and sugar as an evening treat.

And if there is chocolate ice cream in the freezer one day, it will not be there the next.

So it is up to me to keep green beans in the house. I need to provide her with sautéed spinach or broccoli with garlic, caramelized kale, grilled zucchini. I need to make smoothies, and hummus for her carrots. I need to chop parsley for her to sprinkle over her buttered noodles, and slice up apples or bananas and set them down beside her. She eats these things gladly, so long as they are offered to her.

With Dosi, eating well is a joint venture. And sometimes I forget to keep up my end of the bargain.

My mother thinks my daughter is picky, and she would like for me to think so, too. To her, rejecting food is not only immoral (she grew up during the war) but also slightly unhinged, a sign of obstinacy bordering on madness. But who gets to decide what “picky” means? Not her. Not me, either. According to the National Institute of Health, 25 to 35 percent of children are defined as picky — by their parents. The pediatricians don’t tend to agree. To them, most picky kids are doing just fine.

So I try to see the logic in Dosi’s choices: She does not like juicy, acidic foods. She hates tomatoes, strawberries, oranges. And I’ve noticed that the more I respect her aversions, the more likely she is to trust me, and to maybe, once in while, ever-so-gingerly lick a slice of perfectly-ripe peach.

We were in New Hampshire when she did that, and a little while later, I went for a walk. The sky was overcast and drizzly, and no one wanted to join me. I started off up the hill, hiking into the dark woods, but stopped hardly 10 minutes later. It had occurred to me that perhaps the organic farm down the road was selling green beans. I turned and headed in the opposite direction. 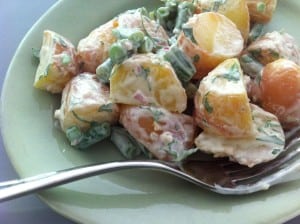 Two miles later, I arrived at Booty Farm (“Booty” is the family’s last name, and does not refer to anything else at all.) In the rocky New England soil and challenging New England climate, they manage to grow some of the sweetest, tenderest carrots, tomatoes, squashes, and beans I have ever tasted, anywhere.

Their farm stand operates on the honor system, out of a wooden shed by the side of a dirt road. I open the coolers one by one. Peppers, zucchini, onions, potatoes, carrots … and finally, in the last one, a tangle of slim, young green beans. I fill my knapsack with three pounds of them, put cash in the box, and head back uphill, feeling purposeful and good-motherish. And happy that my pleasure and Dosi’s will soon be in perfect sync.

One secret to a flavorful potato salad is to splash the potatoes with some mild vinegar while they are still hot, just after you’ve drained them. Another is to make your own mayonnaise — with lots of mustard and herbs.

sea salt and pepper, to taste